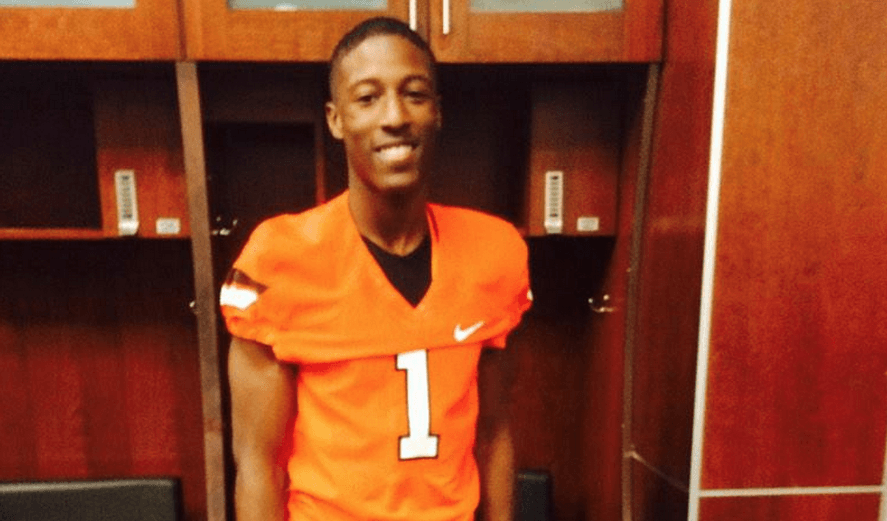 Tyrell Alexander on a visit to Stillwater. (via Orange Power)

As Robert Allen stated on gopokes.com, Tyrell Alexander became the first Cowboy to commit during the spring game Saturday by alerting Mike Gundy in a unique way.

Alexander told Mike Gundy he wanted to take a picture with the head ball coach so he could show his friends his future college head coach.

He also took to twitter to announce his decision:

I have officially committed to the Oklahoma St. Cowboys #GoPokes ? pic.twitter.com/RkdevgHMwM

Alexander is a four-star prospect, according to Scout. At 6-foot-1, 170 pounds, Alexander plays quarterback for Lancaster but said the Cowboys would like to see him at the receiver position.

“I like the relationship the players and the coaches have,” he told Robert Allen. “It is like family and it feels like home to me. I also really like the facilities. It fits me as a player.”

Shortly after Alexander’s commitment, Rodarius Williams became the second verbal pledge for the Cowboys in less than an hour.

Williams’ commitment came as a pleasant surprise, as he visited OU the day before and some expected Williams to pledge to the Sooners.

Williams, who is the No. 47 CB prospect in Louisiana according to 247sports, announced his decision on twitter as well.

Williams also has a pretty talented brother and current teammate at Calvary Baptist. His brother, Andraez “Greedy” Williams, is a four-star cornerback who has more than 10 division 1 offers including OU, Baylor and Texas A&M, but has yet to been offered by OSU.

At least not yet.

There’s another prospect that could be taking a look at OSU’s way soon as well. Chanse Sylvie, a three-star safety who has an OSU offer, has already had a buzz in his ear by Williams.

On the possibility of playing with Sylvie at the next level: “It would mean a lot,” he told The Times-Picayune.

“I’ve been knowing him since we were young. Taking our talent to the next level together would mean a lot. I’m working on Chanse. Every day I see him I’m going to try and get him to commit.”

Assuming Williams ends up signing for the 2016 class, it would make the third consecutive year the Cowboys sign a highly touted prospect from Louisiana.

In the 2014 recruiting class, Gundy and Co. signed running back Sione Palelei, who was formerly committed to LSU, defensive tackle Joyan Williams, and cornerback Juwan Offray.

In the 2015 class, Glenn Spencer convinced safety Kevin Henry to flip from LSU and join the Cowboys. Along with Henry, wide receiver Jalen McCleskey and offensive tackle Marcus Keyes, who was a last second addition to the class, also signed.

Hunting in the talent pool that is Louisiana, with great success, bodes well for the future of OSU recruiting. It’s clear the Cowboys have been able to form a small pipeline to Louisiana, and defensive graduate assistant coach Eric Henderson has had great success fishing for talent in The Boot.