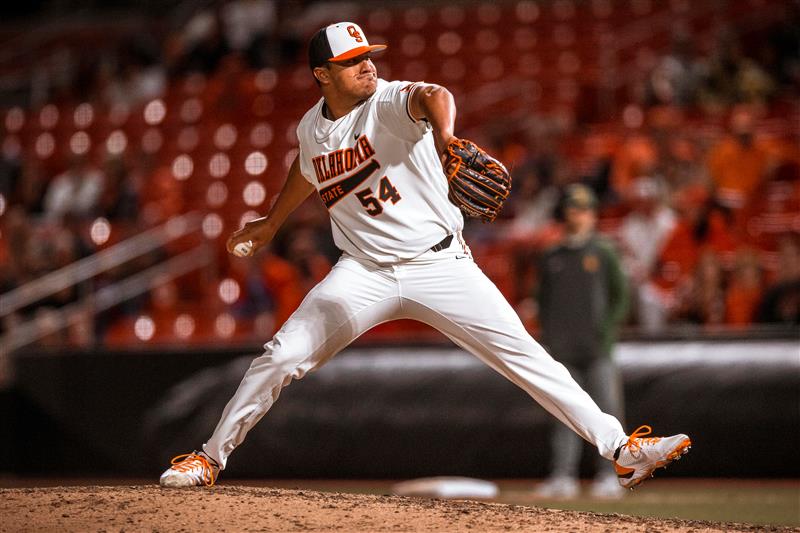 STILLWATER — Marcus Brown had two RBIs entering Friday night, but he delivered his third when the Cowboys needed it.

Oklahoma State beat Baylor 8-7 in 11 innings Friday night in O’Brate Stadium. Brown entered the game in the 11th inning. He came to the plate with the bases loaded and one out when he popped a ball up to center field. It wasn’t the deepest sacrifice fly, but Caeden Trenkle was able to leg it out from third and give the Cowboys the win.

The Cowboy dugout mobbed Brown, a freshman, in right field drenching him with water.

“I don’t think I’ve ever been this soaked in a baseball uniform before, but that was definitely one of the coolest moments of my life and I’ll never forget that,” Brown said. “It was cool to do it in this uniform without a doubt.”

It wasn’t a pretty game for the Pokes, but the win was all that mattered as these teams are in a battle for the 4 seed at the Big 12 Tournament.

A pair of Baylor runs scored in the sixth when Carson McCusker lost a ball in the lights in left field.

A pair of unearned Baylor runs scored in the eighth when a hard-hit ground ball spurted past Jake Thompson at first to tie the game.

The Cowboys also stranded 19 runners on base.

The errors were worse for Baylor, as OSU scored four unearned runs off six Baylor errors. The Bears left 14 runners on.

“I saw two teams full of good athletes on the field competing for five plus hours, and sometimes mistakes are made over the course of the game not long,” Holliday said. “We capitalized late in the game.”

Trevor Martin was key in the Cowboys’ stabilization. He came on in the ninth and threw gas. He topped out in that ninth inning at 98 mph. He threw three innings where he didn’t allow a run. He allowed one hit and walked one while striking out seven.

Cade Cabbiness had hit two home runs since March 14 entering Friday. On Friday, he hit two home runs in his first two at-bats. He went opposite field with a solo shot in the second inning. Then he came back up in the fourth where he again hit the ball over the left-field fence, that time it was a two-run bomb.

Cabbiness finished the day 3-for-5 with 3 RBIs and 3 runs scored.

Eleven pitchers combined to throw 484 pitches on the Friday game of a three-game series. That should make the strategy of the next two games all the more interesting.

The Cowboys and Bears go again at 6 p.m. Saturday in O’Brate.