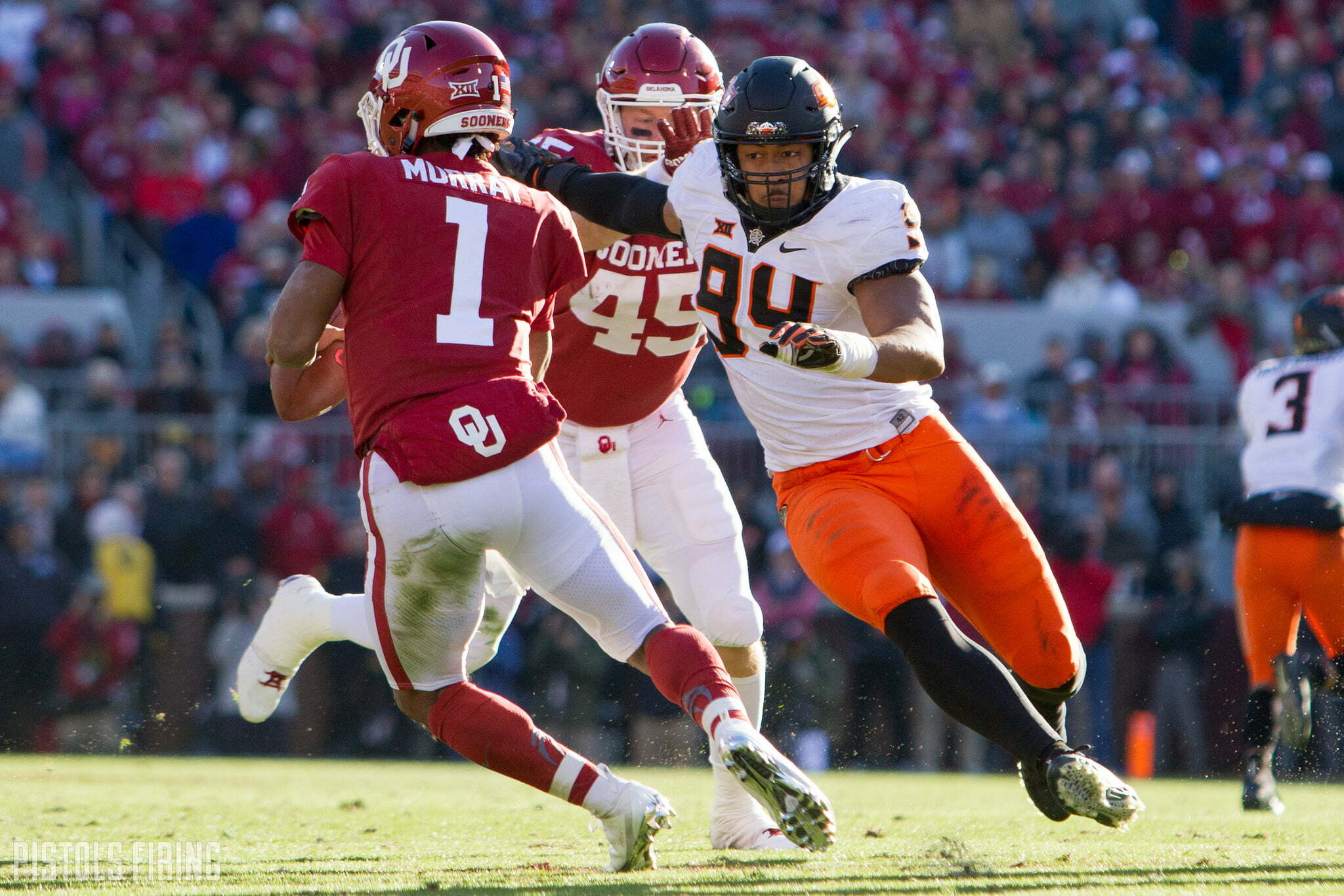 Over most of this season, I’ve felt like I was learning nothing about Mike Gundy’s team. Each time the Cowboys would present some evidence of quality football, they would quickly disprove such notions.

A dominant win over Boise State was followed by a blowout home loss to a team that just fired its head coach. A homecoming win against No. 6 Texas broke up a string of stinkers in Manhattan and Waco. Did you enjoy that West Virginia win? Well, don’t get too high, Pokes fans. We’re heading to Ft. Worth.

But through all of that inconsistency, I think there was actually plenty to glean — even if it wasn’t all that pretty. Here are five things that I learned about Oklahoma State this season.

The offensive line has been good at times this year, but not so good at others. One of its main issues has been its lack of quality depth and an inability to weather any type of bad injury luck.

The hiring of Josh Henson brought quite a bit of optimism and (hopefully) some stability to a position that had seen nothing but turmoil and turnover over the previous four years. The vaunted recruiter and former Cowboy signed more freshmen linemen in his first year than OSU had the previous four cycles. And he’s got four more commitments for 2019 who can sign in December.

While an uptick in recruiting hasn’t exactly translated into immediate on-field success — freshmen rarely contribute in the trenches — there has already been improvement shown over the last two seasons despite replacing three starters from a year ago. It will take time to restock a bare cupboard, but it appears that OSU has the right guy to do it.

If the Cowboys are to be without Justice Hill in 2019, at least they have his heir apparent in place. The Canadian speedster, who Mike Gundy was somehow able to keep on ice for all of 2017, has exceeded expectations in his first year on the field.

He’s more than just a return specialist or a converted track star that you try to get the ball to in space. Chuba has proven he has the ability to run between the tackles and that he can be a really good three-down back for OSU. (By the way, they do need to get him the ball in space.)

We knew coming in that Jim Knowles and OSU’s players would face an adjustment period while revamping the defense. Stylistically, we knew (or had a pretty good idea) that this defense would bring a lot of pressure, get some sacks and that it would probably give up its fair share of big plays.

The Cowboys lead the Big 12 and are sixth nationally with 39 sacks in 12 games. All-Big 12 first-teamer Jordan Brailford leads the league with nine himself, though he hasn’t gotten to a QB since his lone sack of Sam Ehlinger during the Homecoming win over Texas.

As far as giving up big plays? Yikes.

The Cowboys are tied for most passing plays allowed of at least 20 yards (58) in the nation (!). The other team is 2-11 Rice. The closest challenge for back-end sieve in the Big 12 is Oklahoma and its maligned secondary that have given up “just” 47.

Part of that is life in a conference where you line up against Marquise Brown, David Sills V and Jalen Reagor in consecutive weeks, and part of that comes with doing so on an island.

OSU’s defense showed up several times this year but the overall result was not satisfactory. Does that mean Jim Knowles can’t and won’t succeed at Oklahoma State? No, but the onus is on he and his squad to prove they can take a step forward in 2019.

I won’t dive head-first into Oklahoma State’s shortcomings in recruiting. (Kyle Boone has already done a masterful job of that here). But any unbiased bystander with a head above ground level can see the impact that a couple of skill players (or lack thereof) can make have an OSU season, or the program for that matter.

Simply put, saying goodbye to one graduating class shouldn’t turn an underachieving 10-win team into a .500 squad that eeks out a bowl berth. Maybe that’s an oversimplification, but it’s pretty apparent that Oklahoma State doesn’t have the dudes to accomplish its goals on a year-to-year basis.

If consistent top 15 seasons and winning a conference title once a decade is the ceiling in Stillwater, that’s a pretty great place to be in comparison to most schools. But if you aren’t moving forward and trying to take that next step, you’re sliding backward. There is no status quo. That’s the case in any type of business and it especially applies to recruiting and building/maintaining a college football program.

5. There is an Apparent Lack of Leadership

As I mentioned above, Oklahoma State lost a lot from its 2017 team. But it’s missing more than just Mason Rudolph’s 4,900 passing yards and 47 combine TDs. The departures of James Washington and Marcell Ateman were felt more than just on the field and in their combined 2,700 receiving yards.

Chad Whitener was huge for the Cowboys defense because of his 76 tackles, but he was also a three-year starter who had the attention of anyone within earshot. Ramon Richards was an outspoken leader (and cheerleader), and a handful of senior O-linemen also left huge shoes to fill in the influence department.

The point I’m meandering to is that leadership has been lacking from Oklahoma State’s locker room and on the field in 2018. There’s no other way to slice it.

You don’t get quarter- or half-long no-shows from either (or both) phases of a football team without a lack of leadership from within. The offense sleep-walking through three quarters in Ft. Worth was just the latest example of that.

A team with strong leadership doesn’t set records for penalty yardage, doesn’t pack it in for an entire second half and doesn’t get blown out by a lesser team on its home field.

All is certainly not lost but, as Mike Gundy has harped on all year, they need to find out who their leaders are moving forward. Gundy’s not above reproach, by any means. The buck lands on that nice desk in his spacious office.

But all of the best (and my favorite) OSU teams had an identity. Name off a year, and a certain face or faces will come to mind that took ownership of their teams. That’s something that I believe is lacking, unfortunately, from this team. Maybe I’m wrong — I’m not in the locker room nor in practice — but we haven’t seen much on the field that shows any different.

I think some believe Hey, Spencer Sanders will ball out and OSU will be fine. Maybe I’m guilty of that. But you can’t hang the hopes of what is purported to be a major college football program on the talent of one player. I hope he’s the best leader and player in Stillwater next year. But banking on it is risky business.

These things can be fixed, leaders can emerge from within. Coaches and players can improve. But it’s going to take some soul searching from everyone involved, heading into bowl prep and beyond into the offseason, for significant improvement to take place.