Solid article on what Rickie Fowler is all about. Hat tip to Ryan Cameron on the find. (The Province)

In case you missed it yesterday, Wes Lunt Broke his foot. (SJ-R)

Matt Pilgrim will play basketball in Turkey. I think his team plays in the second division there (like the Turkish D League?) but I can’t be for sure since I can’t read anything beyond “USA” on their team site. He’s the only American on the team, which somehow seems fitting. (Nation of Blue)

Johnny Deaton will transfer to NSU. One of my friends texted me: “like, the school in Tahlequah, OK?” Yep, the one and only. How about 4-star quarterbacks transferring and we don’t even blink? Gundy’s come a long way in six years. (NewsOK)

OSU finalizes a Big Monday game with KU in Gallagher-Iba for 2012 deep into the conference schedule. I feel like at that point LeBryan is going to be either averaging 22-10 and just cleaning up the Big 12 or off the team, and nothing in between. Totally rational thoughts from @pistolsguy on a Friday! (okstate.com)

Not sure this is the guy I want him learning from, but as long as he’s getting better I guess it doesn’t matter. (ESPN)

Ubben has Weeden as the #1 QB in the Big 12 but says Landry Jones will usurp him by season’s end. I think they’re both going to have big years but that Weeden’s is going to be better. I think he’s going to put up some surreal stats. (ESPN)

Ubben also says if they repeat what they did last year then Weeden2Blackmon will be the best QB to WR combo in conference history. I concur. (ESPN)

This is so in Berry Tramel’s wheelhouse and he buries it. (NewsOK)

Former OSU golfer shoots under his age, including a double eagle and hole-in-one. Again, thanks to Ryan Cameron for the link. (PGA Tour)

If you’re in love with KD’s choirboy image I suggest not clicking on this link. (Ball Don’t Lie)

My dad sent me this. It would be funny if it wasn’t true. 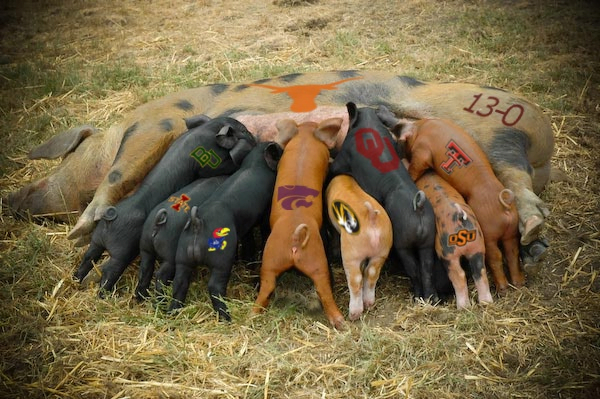 Good explanation of Google+. Hat tip to Kevin DeShazo for the find. Do I even do any work anymore or do I just let other people find my links?