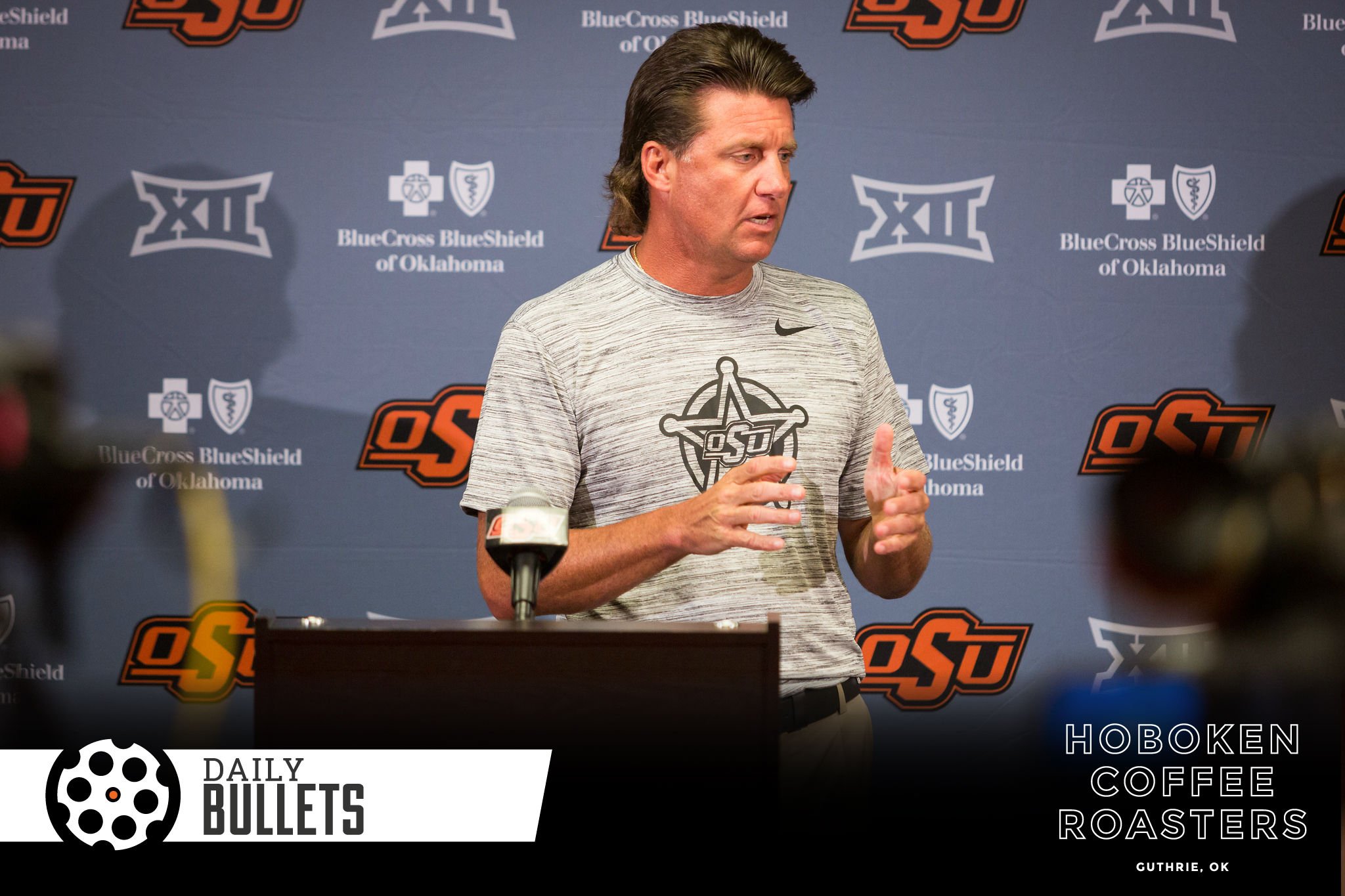 I watched “Grapes of Wrath” last night, can’t imagine how shaping that was of Oklahoma’s image on a national scale.

•  In a very insightful recent piece by The Athletic ($), Mike Gundy had some high-level thoughts on the Pokes.

“I got some complacency,” Gundy said this spring. “I got in a little bit of a comfort zone because things were just kind of rolling. When I looked back and audited myself, or self-scouted myself and the organization, I realized that I was the one that let things get into a situation that hadn’t been in the past.

“When I looked at it, it was my fault that we didn’t win double-digit games.”

Gundy admitted to as much in a recent interview with the TulsaWorld’s Bill Haisten but the concept is a fair one. First of all, the Pokes wouldn’t be anywhere near capable of busting the Broncos or branding the Longhorns without Gundy’s stability and innovation. And you can understand a coach leaning back in his chair after he’s established a culture and expecting it to sustain itself on a level.

But the nature of the game is that players graduate, new ones come in and need coaching. It sounds like Gundy is prepared to lean forward in his chair and engage with the process again.

• While we’re touring OSU sports at a high-level, some thoughts Mike Boynton had on why he felt OK about 2018-19 Cowboy Basketball struck me.

“I’ll be honest, that’s the thing I was most proud of about our team,” Boynton said. “Everything in this world outside of our team says you don’t have to worry about everybody else. You can have your own phone, your own headphone and play your own video games and you don’t have to be concerned about how your actions affect other people.

You can look at the uptick in recruiting and a team that didn’t give up regardless of odds or you can look at the lack of tournament appearances and player evictions and feel completely different. I tend to lean more glass-half-full assuming Boynton can keep this version of the core together and win some games.

I think Berry Tramel put it best in a recent chat for Boynton’s next team:

I think OSU will be solid. Middle of the Big 12. Contend for an NCAA Tournament berth. I like Boynton as a coach. [NewsOK]

• First – the good news: the Pokes brought home conference title No. 55 for the golf team.

Oklahoma State’s men’s golf team accomplished nearly the only thing it didn’t accomplish in 2019, winning the Big 12 title. The Swinging Petes ran away from the Swinging Frogs and the rest of the field on Sunday at The Greenbrier with a 1-over 281 to finish at 13 under and take the Big 12 by 11 strokes over TCU (the only other team to finish under par). [PFB]

• Alternatively, the story of Cowboy Baseball being swept by the Red Raiders could be summed up well when considering how Sunday’s third loss took place.

The Cowboys had a 2-0 lead in the sixth inning, but the seventh put the game in Texas Tech’s control.

Brett Standlee, a redshirt freshman starter, had his first loss. He surrendered four runs in the seventh, including Dylan Neuse’s three-RBI home run.

OSU has frequently allowed one big inning to shift the momentum. [O’Colly]

After being outscored 27-8 on the weekend, the Pokes neither had the ability to limit big innings or rack up runs themselves.

• Samantha Show and the Cowgirls walked off the Lady Red Raiders and swept the series in Stillwater:

For the third-straight year, the Big 12 title will come down to #Bedlam.

If you take one thing from this weekend let it be this – with this team, and our fans, ANYTHING is possible. ?? #okstate pic.twitter.com/0Vf1xDX7KP

• There really needs to be a way for underclassmen who don’t get drafted to come back to school.

The NFL draft is over and 49 of the 144 underclassmen who went pro were not selected. Here's the list. pic.twitter.com/O8d2WBh19y

• The Last Chance U player receiving an NFL camp invite