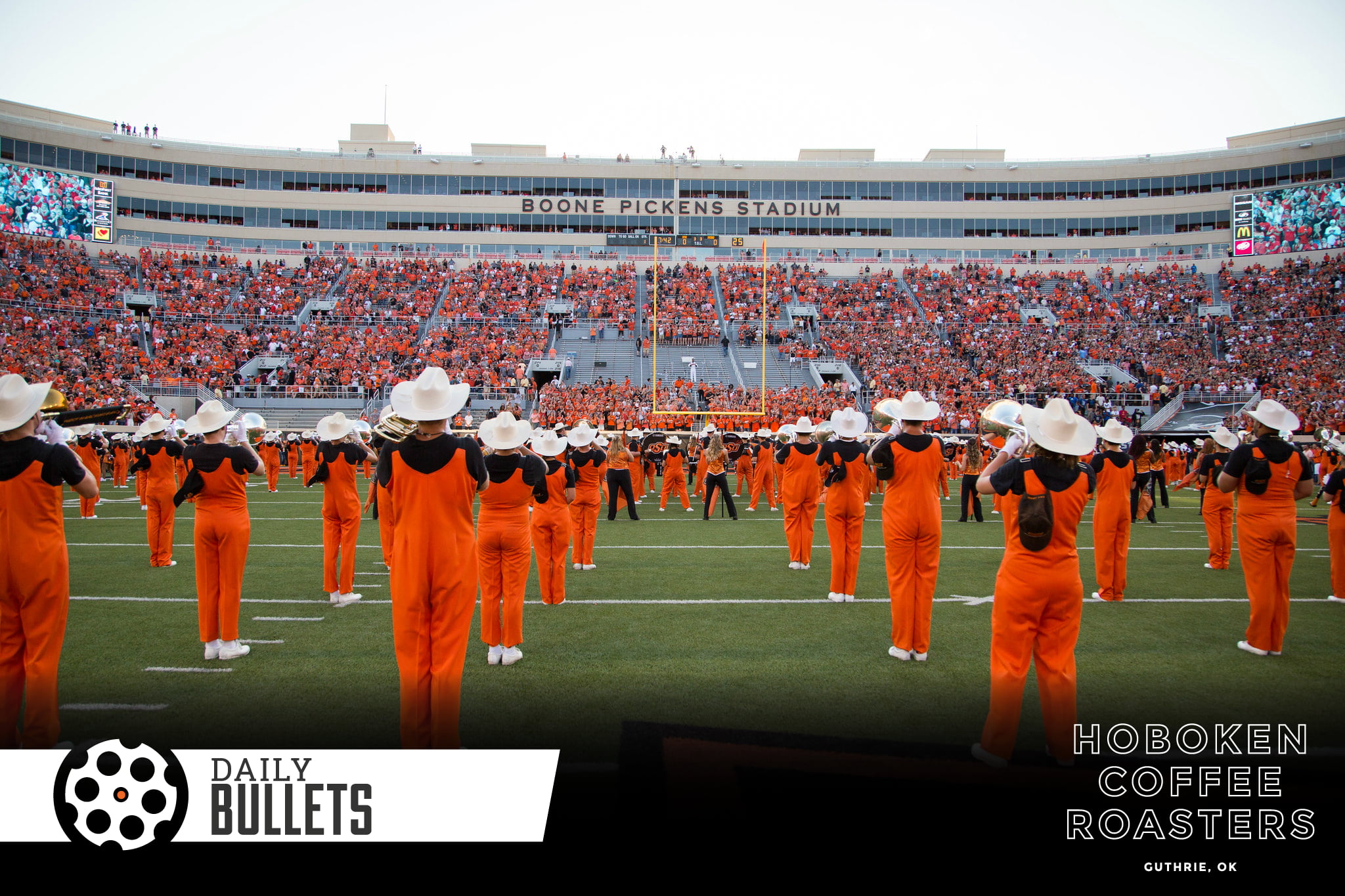 Gundy landed a 6’7″ lineman yesterday right out from under the Missouri Tigers’ nose yesterday – very nice.

• Dunn says buy stock in C.J. Moore but hold it
• QB1 candidates rave about each other
• Dru Brown speaks

• Most Viewed of the Week (No.1): Kasey Dunn isn’t Counting on C.J. Moore Starting This Year

Dunn’s comments caught us off guard. With a vacancy across from Tylan Wallace, one would assume a full-fledged competition would be in line and Moore, a four-star receiver, would be given equal footing.

Instead, it appears C.J. Moore will join his fellow 2018 four-star commit Spencer Sanders as players generally considered with a high-talent level but not given an inch conversationally based off of this quality.

Does that make sense? One would assume a program like OSU would be giving the benefit of the doubt to the more “talented” players like Moore and Sanders when there is a hotly contested opening on the depth chart.

• Most Viewed of the Week (No.2): Dru Brown and Spencer Sanders Say Flattering Things About One Another

This seems like something unique to OSU, right? I obviously don’t follow other programs enough to know but I don’t know that Shane Buechele was calling Sam Ehlinger “Tim Tebow” during the competition a couple of years ago. Either way, it’s a nice touch and something you would assume is an organic setup.

Now – if I were in a competition with someone, I would rather have said nice things to them in case I lost. Wouldn’t you rather be on the record for losing to a Drew Brees-eque quarterback than Cody Thomas (2014 OU quarterback that laid an egg against the Pokes)?

• Most Viewed of the Week (No.3): Dru Brown Speaks

This was released prior to the “hype the other guy” piece referenced above – and really the first time we’ve heard from QB1 candidate Dru Brown. The starting quarterback is the highest-profile position on a college football team (at some point, is the receiver more intriguing at OSU?) and while there wasn’t a lot in Brown’s interview, it was great just to hear from the guy.

• Most Viewed of the Week (No.4): Big 12 Football Records That Shan’t Be Broken

The best part of this article was looking at the “old” Big 12 records. You know, before offenses started exploding left-and-right and a third of the blue-chip talent on defense (in Texas) formerly going to the Big 12 started going to the SEC.

Here are a couple quoted: Texas A&M allowed three passing touchdowns in 1997 – the entire season. It was wild when Kansas didn’t throw a passing touchdown all season, even wilder when a team only allows three all year. Another one – Nebraska running the ball 755 times in 1997. Think about how many times a game Mike Leach’s quarterbacks threw the ball each game at Texas Tech – that’s the equivalent of how many times Nebraska was running the ball (62.92 attempts per game).

• Most Viewed of the Week (No.5): Cade Cunningham Is Even Better Than You Think

This one is almost too hard to fathom. The gold standard for blue chips in Stillwater has to be Marcus Smart, right? His NBA-level intangibles galvanized the Cowboys into competing in games they shouldn’t have been in and he filled up a stat sheet faster than I can clean out a gift card to Dairy Queen.

Well apparently, Cunningham is a top-shelf talent that appears to be the best NBA prospect on the map. There are a couple of reasons for that: he’s a 6,7″ point guard that can create and he can spot up shoot. The NBA loves a point forward and locally, OKC just sold their best asset and got a 6’6″ point guard in return.

I love comparing Cunningham to the 76ers’ Ben Simmons – but Cunningham has a solid shot.

• The multiplicity of the Toronto Raptors won them a title

• The science of regrettable decisions