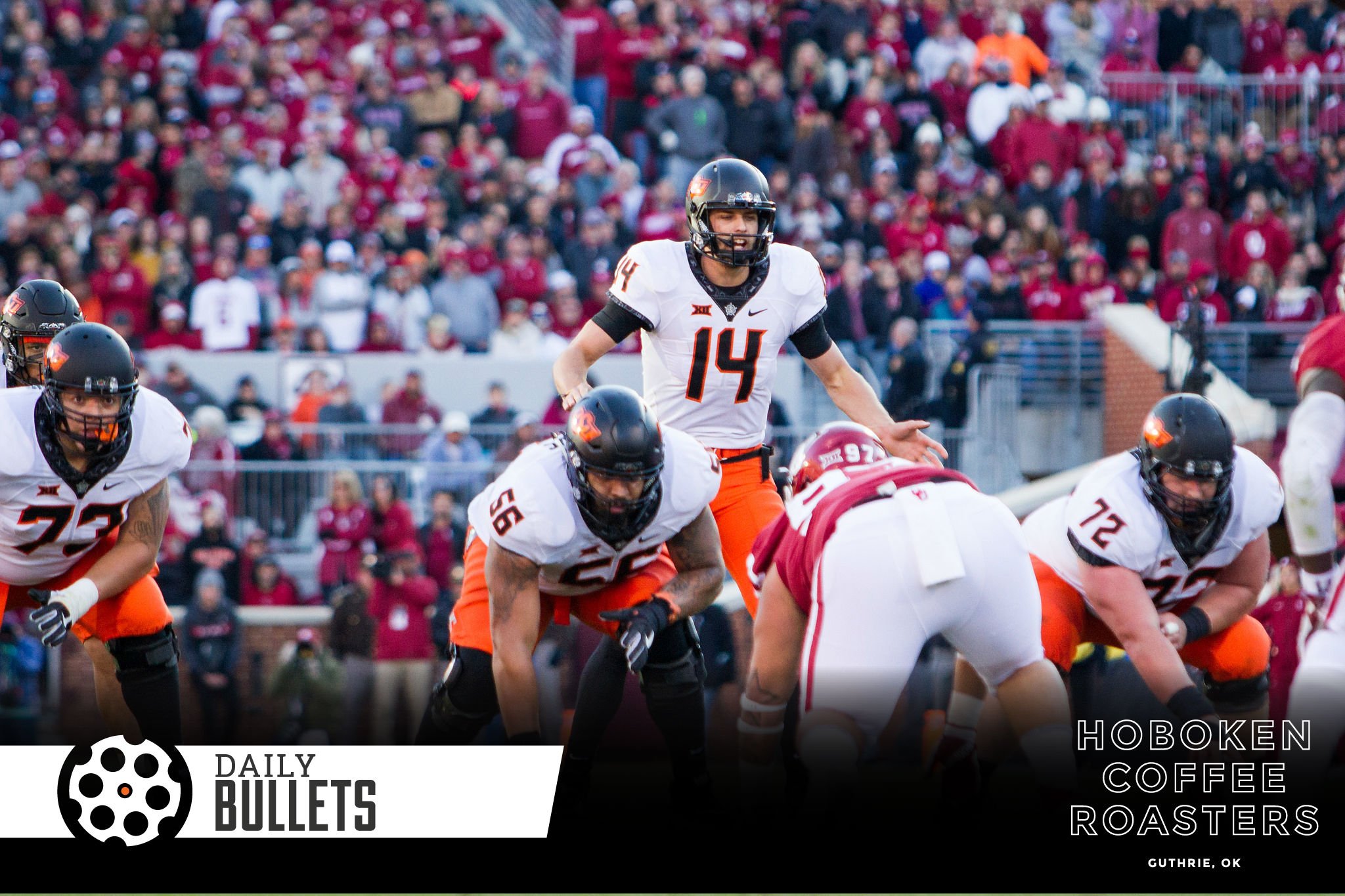 Early Signing Day is for the Pokes

Do you remember when there was drama leading up to national signing day for the Pokes? That’s not really the case anymore with only a recruit or two hanging in the balance.

(Langston) Anderson spent the final recruiting weekend on a visit to Ole Miss, but OSU has been working hard as well. Gundy, offensive coordinator Mike Yurcich and receivers coach Kasey Dunn made a joint visit to Anderson’s home last week.

Beyond that, there’s no drama that is expected to play out on Wednesday, though surprises are always possible. [NewsOK]

The NCAA setting up an early signing period is really a head nod to the Oklahoma State’s of the world – acknowledging that when the more highly touted players don’t sign, the teams slide down the pecking order and grab commits from the mid-tier teams.

One of the names I’m most excited about in this recruiting class is New Mexico lineman Taylor Miterko… just listen to the things said about this guy.

In 25 years living in Carlsbad, Cerny can’t recall a lineman as dominant as Miterko. A 6-foot-6, 270-pound tackle, Miterko grew up in the Dallas-Fort Worth area before moving to Carlsbad, a booming-but-small oil town in southeastern New Mexico, before high school. It’s not a school or an area that produces many high-level college football players, but Miterko’s offers piled up. Four Big 12 and six Pac-12 schools came offering. Notre Dame did, too.

Miterko will sign with Oklahoma State on Wednesday, though, honoring a verbal commitment he first made in June after an official visit to campus. [TulsaWorld]

The way OSU lands most of its players early in the recruiting cycle can be a bit anti-climactic come signing day… But there’s something to say for getting all the right guys with plenty of time left on the clock.

The previous piece alluded to Langston Anderson, the Cowboys’ primary receiver target. According to the site 247Sports – GoPokes.com – OSU is now trending for Anderson.

So it’s not surprising that less than 24 hours after Anderson left Ole Miss that his Crystal Ball predictions have changed and drastically. But, what is surprising is that it’s not in favor of Ole Miss and not even a little bit. Just a few weeks ago, Baylor held the Crystal ball lead for Anderson at 77 percent and Oklahoma State in a distant second with just 15 percent and Texas rounding out the three with just eight percent.

Fast forward to today and Baylor still holds the lead, but only with 54 percent while Oklahoma State has gained and flipped some votes to bring their percent all the way up to 46 percent. [GoPokes]

Cowboys appear to be closing well with Anderson, a receiver that would help to continue layering the depth chart with talented wideouts.

Expanding the Playoff not on the docket for decision-makers….Revival of Alabama-Birmingham Football….Blake Jarwin talks life in the pros….Oklahoma boy turned Bama running back – another reason to “Roll Tide” over OU on the 29th….Tampa Bay Bucs coach unlikely to be retained means Todd Monken will be out on the market

Love it (as long as their name and likeness results in NCAA Football video game returning).

Not every day a five-star gets out to the open market.

QB Justin Fields is transferring from Georgia, could be the country’s “most highly coveted transfer,” per @DanWolken pic.twitter.com/mTdWWNVlc6

The more time goes by, it seems like Boynton was Underwood’s ace recruiter on staff.

Fans, coaches and players keep asking: Where is Brad Underwood?

“That is not a good look” – Simeon coach Robert Smith.https://t.co/efbbx0XG7L pic.twitter.com/Z8fVCFdyv2