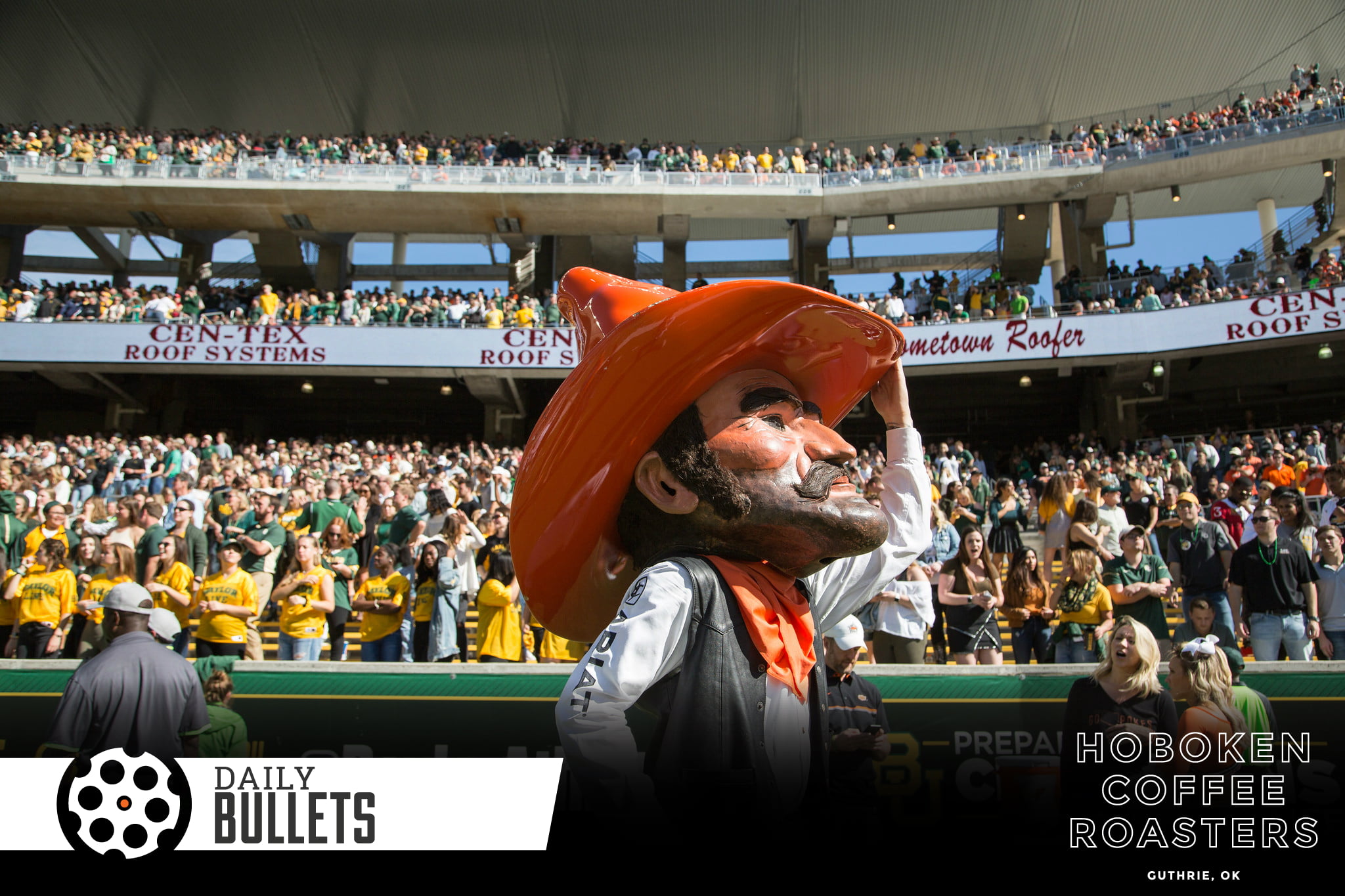 Happy 5th birthday to my oldest son, Middle Child Pistols. May your day be full of LEGOs, ice cream cake and all the checkers you can play. And may you never get involved in the middle of a passionate discussion about mid-level recruiting on the internet over the next 80 years of your life.

• It’s “piling on Mike Gundy” SZN, I see. Bill Haisten of the Tulsa World and Berry Tramel of the Oklahoman both wrote provocative (or what counts as provocative in the world we live in) columns about Gundy and the future.

So no time to panic. But a Liberty Bowl loss to Missouri would hand OSU a losing season for the first time since 2005 and raise the question. Just how much fun are the Cowboys having? [NewsOK]

Consider his longevity in a demanding business: Gundy is 51. He has been a college football coach for 29 seasons. He probably would deny it, but is it possible he is contending with the effects of burnout? [Tulsa World]

If you’re here for a sympathetic Gundy take, I have none. I’ll ride for Gundy until his cows come home (unless he traded them all for peacocks), but those 13-12 Mason Rudolph bookends demand a few questions that are being asked. Even if Gundy has goofy answers.

• Do we agree or disagree with the following statement from Kyle Boone in his grade distribution piece from Thursday?

Mike Gundy has absolutely earned the benefit of the doubt that this class will wind up to be successful, but coming off a 6-6 campaign full of tumult, it’s a hard sell to be fired up about the future with an average-to-slightly-below average incoming recruiting class. [PFB]

I agree with him that Gundy has earned the benefit of the doubt, but I wonder if I’m saying the same this time next season if OSU goes 6-6 again or, gulp, worse.

• You can no longer #FireBillYoung because he’s retired after 50 years. Nothing reminds me of the passage of time quite like a retirement, and this was a good quote from young.

“Coaching has been good to me, a great experience,” Young said. “I can’t imagine doing anything else and having enjoyed it as much. I started off as a high school coach, then worked my way into college.

“It’s been fantastic. I’ve had the opportunity to work with some unbelievably good coaches and people. I think a little bit of all of them rubbed off on me, and hopefully helped me become a better coach.” [Tulsa World]

Also, the man orchestrated one of the great turnover margin seasons in recent CFB history back in 2011. It wasn’t as responsible for 12 wins as the offense was, but it certainly deserves more credit than it gets.

• Gundy loves two- or three-sport guys maybe more than any CFB coach has ever loved anything so you know he’s dying to get Demarco Jones in the two-deep in OSU’s secondary. Also, this is a cool story …

As Jones’ junior year went on, Calip kept trying to sell Jones’ talent. Ironically, it was a highlight from a basketball game that Calip believes turned the tide in OSU’s pursuit. “(Jones) threw a pass across the court and it got picked off, and the guy was going up for a layup,” Calip said. “DJ came from nowhere and pinned the ball on the backboard. I sent that to Duffie, and said, ‘This is why you need to sign this guy.’” [NewsOK]

• I want Mike Gundy to care about recruiting half as much as Lincoln Riley does.

Yet Riley seems to treat recruiting not as a necessary evil, but as a perk of the job. “I enjoy it,” Riley said. “You’ve got to win your fair share. So we have fun with it. As everyone could see, we put a lot into recruiting. We put our heart and soul into that, too, as much as we do winning games. We know it all matters. Absolutely we get excited when a guy chooses us.” [NewsOK]

Sorry not sorry. We’ll sooner see Gundy doing this over his son signing up for three sports at Stillwater HS than about grabbing a four-star player.

• I heard Kyle Boone and Dustin Ragusa do some Dez-Langston talk on the most recent Reload Podcast and I almost kicked them both out of our Slac …. oh … wait … oh my. What is this GIF I’m watching. This guy is coming to Oklahoma State?!

• The title of this film on WW1 — They Shall Not Grow Old — is nearly as staggering to me as the way the film itself was developed. Also, I loved this focus from Peter Jackson.

Even with all of these moving parts, and with footage that could have told a dozen different war stories, Jackson tried to keep his film specific.

“I didn’t want to do a little bit of everything,” he said. “I just wanted to focus on one topic and do it properly: the experience of an average soldier infantryman on the Western Front.” [NYT]

• On going from discovering the internet to getting lost in the stream.

What we lost in this shift from the hyperlink to The Stream was the ability to encounter diverse ideas, radical insight, and transformative new perspectives. What we got instead was more of what we already know, delivered like a pre-masticated paste, easy to digest and sure to please … [Cal Newport]