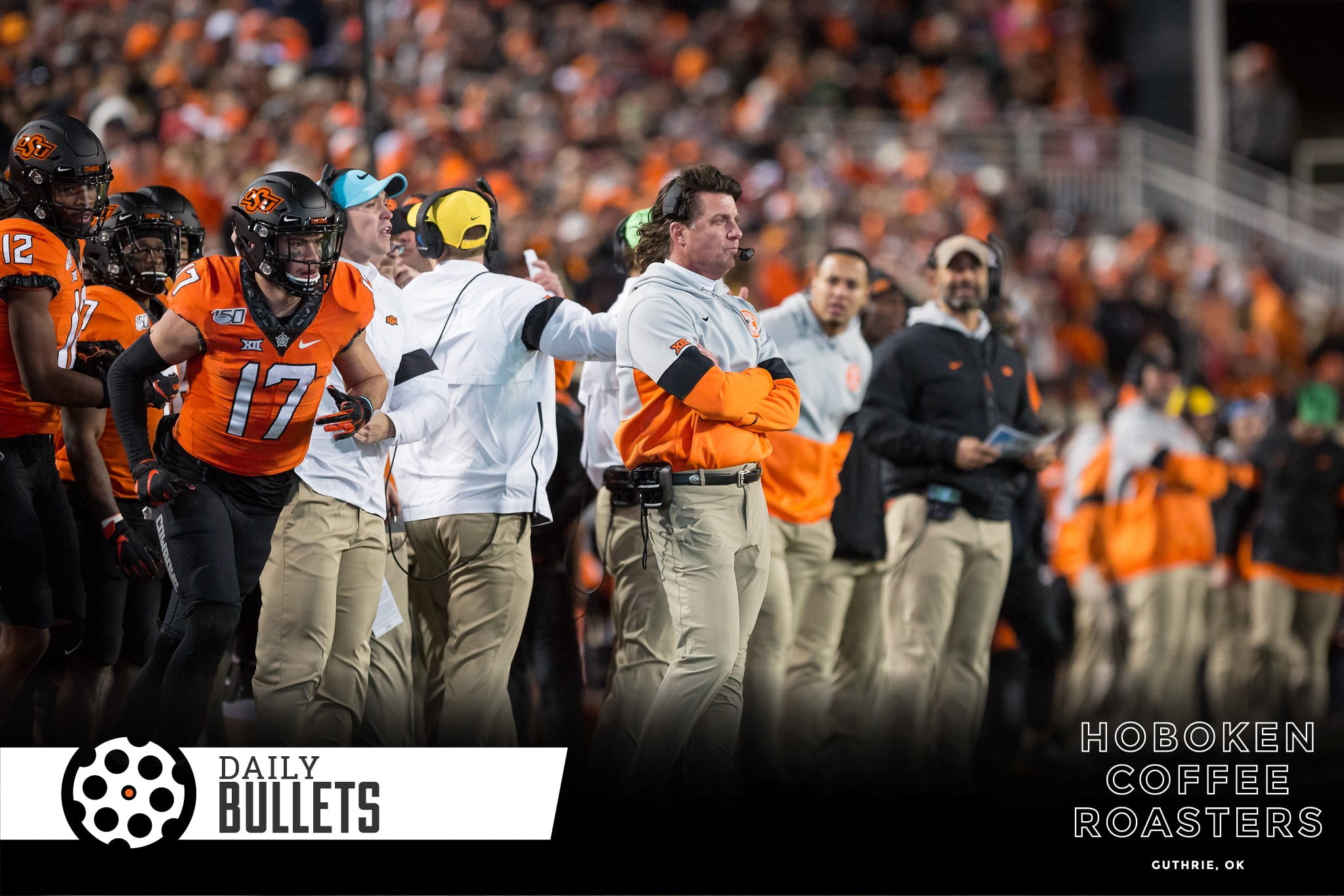 It’s simultaneously impressive that Mike Gundy could take a team without three of it’s five best players four points from a road win against Texas A&M and disappoint with the offensive output.

This is intriguing, right? Let’s not put Mike Gundy in the same ballpark as Bob Simmons as far as their success at Oklahoma State but anybody born before the late 1980s tremors a bit at the name Nathan Simmons (#JamalFobbs4eva).

It’s fun though, right? To envision a new Gundy rolling out and throwing dimes, willing the Pokes to victory with a swagger. Giving him an extra year (sitting out in 2020), presumably to work out and get better, maybe to align more closely with Spencer Sanders’ departure.

• Most Viewed of the Week (No. 2): UNLV Hires Away Kasey Dunn

Two takes on this – how fortunate was Oklahoma State to keep such a talented coach as a position coach in Stillwater for nine years? The other is how did they let him walk.

The thing that perplexes me with Mike Gundy’s coaching decisions is this: what does he value more, bringing in new talent with a fresh perspective or maintaining the status quo? While the playcalling (to the untrained mind) has looked very similar over the last ten years (play fast, power run inside and throw it deep), continuity has been championed.

Then why not promote Joe Wickline, Gunter Brewer or Doug Meacham? Marcus Arroyo or Josh Henson? Kasey Dunn? They all had a clear picture of what it is he likes to do. Hiring from back east doesn’t seem like the way to do that, it seems like the way to change and evolve.

• Most Viewed of the Week (No. 3): Cowboy Great Rusty Hilger Passed Away

Mr. Hilger was before my time but this line says a lot: Hilger was the QB of OSU’s first ever 10-win team. That’s not hanging a championship banner but that’s something a lot of programs struggle to do.

I don’t hold that a person’s life is defined by their success in college sports but it’s not insignificant either. How much does the success Hilger had effect other players that would follow? Did a young Mike Gundy watch those games and think OSU could be a fit?

• Most Viewed of the Week (No. 4): Kolby Harvell-Peel Out for the Texas Bowl

Call me crazy but I don’t think this ended up being a huge deal. KHP weighs heavily on the turnover margins and making plays in coverage. I think Tre Sterling being out in the first half combined with missing KHP was a significant blow to this defense. Sterling fills the gaps in the run defense.

Realistically, this team had four or five players in fall camp that it’d be hard to win nine or ten games without. Tylan Wallace and Spencer Sanders were certainly two of them. KHP, an All-Big 12 safety is certainly one as well. Taking an extra one or two of them away is the difference between the win and a loss in such an evenly matched game.

• Most Viewed of the Week (No. 5): Mike Yurcich Rumored for the Texas OC Job

This one heated up even more after the initial report – Mike Yurcich is reportedly the guy to take over in Austin. This is such a tangled web – Tom Herman comes from Ohio State and picks their depth chart of offensive talent. Mike Yurcich’s experience in the Big 12 will surely come in handy.

This doesn’t seem like the rational move from a career security perspective – Tom Herman isn’t exactly wowing the administration with seven win-seasons. You can’t blame the guy for the cash grab – he was making $950k in Columbus. But it’s hard not to imagine there being some plan for him to take over playcalling in Columbus at some point.

• This guy’s top YouTube videos of the year were great (some faith-based) – Eastern Kentucky Alexa was hilarious
• Really interesting look at a new way media should cover trends subjectively (from people’s perspective, not the media) via NYT
• Trackless trains could be a solid innovation