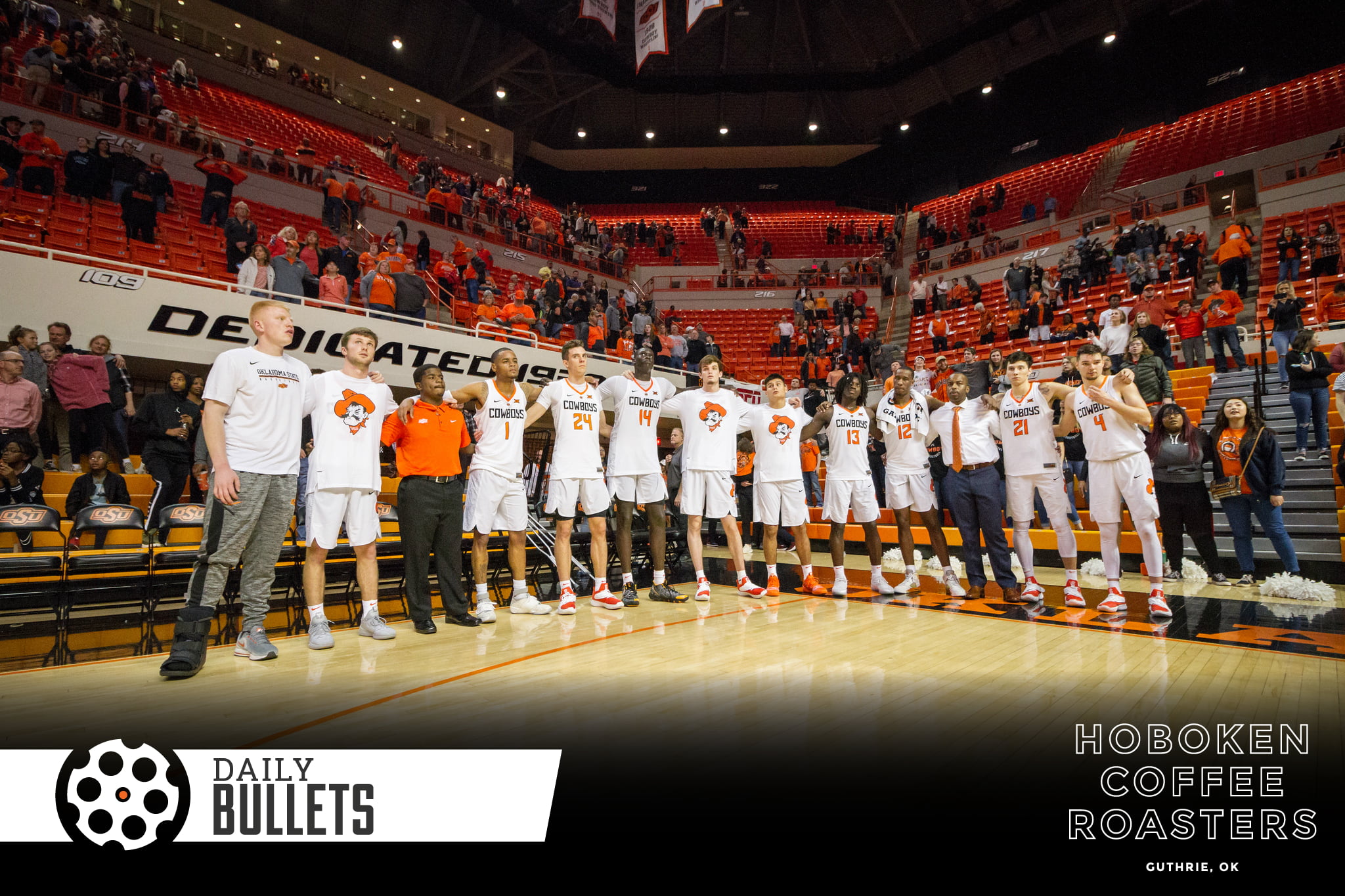 I loved this piece on Les Miles and the undertaking at Kansas. What will win out between the coaching graveyard that is Kansas football (they’re the Cleveland Browns’ quarterback job of the NCAA) and Les Miles’ capacity as a motivator and recruiting connections?

• One of the wilder aspects of this Cowboy Basketball season is how recently it was held that the Pokes had signed too many players.

Just two months ago, Boynton was being asked about Oklahoma State having too many scholarship players for 2019-20. Oklahoma State had 10 players eligible to return, plus four commitments signed in its 2019 freshman class. [TulsaWorld]

When Marcus Watson committed, the roster was set to be oversized for the 2019-2020 season with one scholarship player too many.

• Mike Boynton spoke on the importance of continued discipline within the program.

“I’ve gotten advice from a lot of coaches that it’s a big part of the job, discipline, and if you have standards, they only mean something if you enforce them,” Boynton said.

“If you don’t, then the standards change, and now you’re being run by the people in the program and not necessarily leading. Sometimes, we have to take hard stances, but I think it’s gonna be beneficial for us moving forward.” [NewsOK]

What a fine line for a coach to have to learn to walk. You can bend your rules and maximize your talent while risking an “inmates running the asylum” scenario or you can draw a line and hope enough talent can stay on the right side of that line for you to develop a winning roster.

• The Cowboy football spring game (April 20th) is setting up for a fun weekend in Stillwater.

…(I)t does again match up with the spring football game being the same day as the Remember the Ten Run that morning on campus. Also, that day Oklahoma State baseball will be hosting the third and final game of the Big 12 series with Texas. That will make for a big sports day on campus. [GoPokes]

• Cowboy guard/forward Lindy Waters went from youth on the fringes of trouble to locking down lottery picks and swimming back into the good graces of division one basketball.

A few years later, at an AAU tournament in high school, that newfound edge helped him when he went head-to-head with Dennis Smith Jr. and held the future NBA first-round pick to roughly 10 points. Waters, meanwhile, scored more than 20. Soon after, the Ivy League and mid-major schools offered him scholarships. Power 5 programs such as Oklahoma State followed. [ESPN]

If you’re a Waters fan, make sure and check out the read. It was cool to hear about how his Native American roots and “rez ball” shaped and improved his game (on top of influencing youth in positive ways).

• A fun look at college football national champs over time.

Here's a fun way to tell the history of national championship claims:https://t.co/4WR55U3tjQ pic.twitter.com/P3yfAuu6ww

• A look at the teams with first-round picks at QB since Ohio State had one. All Mike Yurcich has to do is get a QB drafted in the first with his choice of talent across the country and he’ll look like a wunderkind.

• Finished this terrific fiction read about a family in a small-town – easily my favorite book to date this year (Educated and The Tattooist of Auschwitz were both incredible too). You can see what I’ve read so far in 2019 here.

• Rejection appears to be inescapable en-route to success

• Paul George and his terrific season