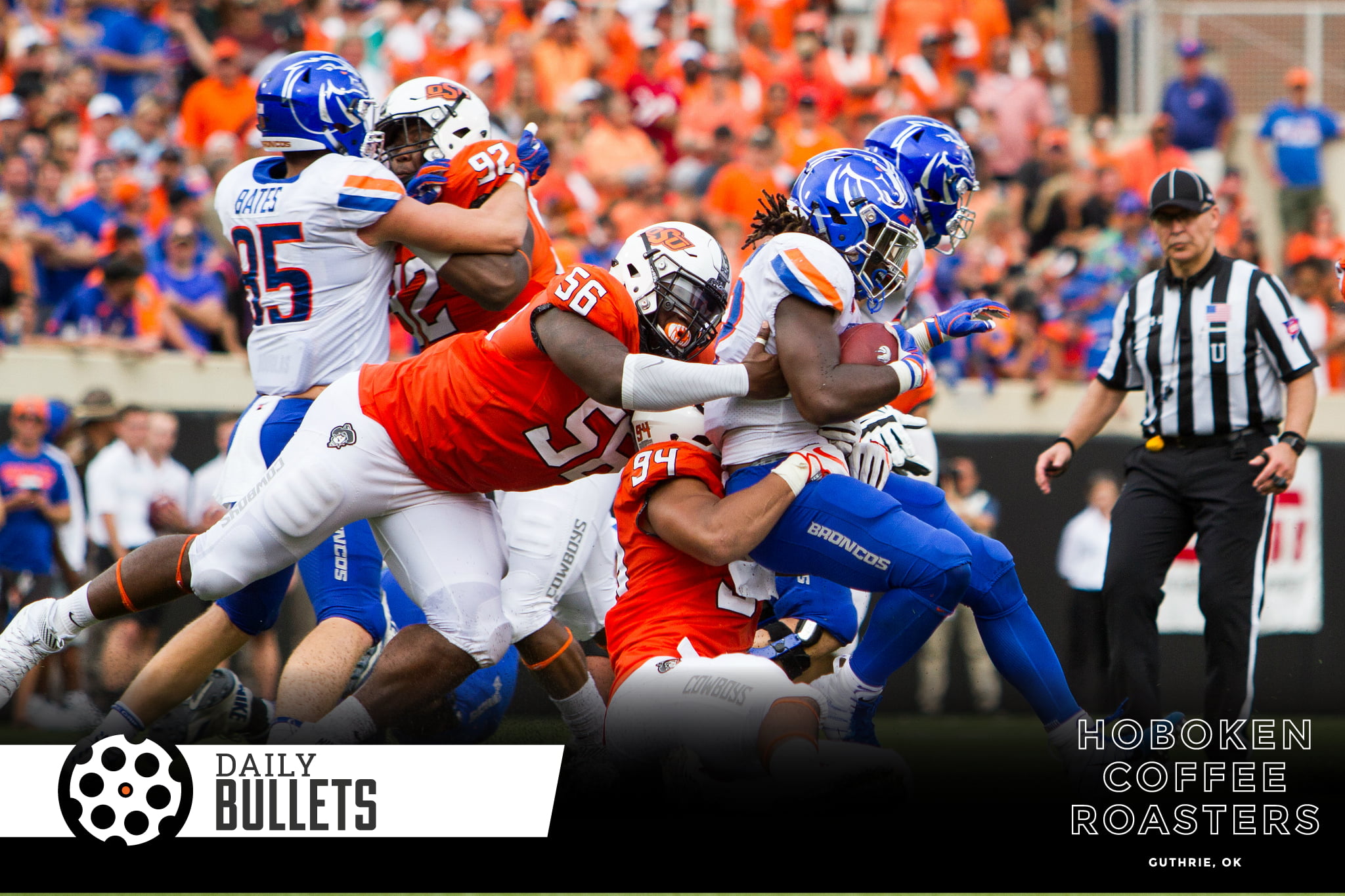 Sometimes life is fair and it’s really fun. Seeing this wrestler taken down after being a stinker is fun.

• In what was a treasure trove of quotes about the incoming Cowboy Football recruiting class, SB Nation’s Ian Boyd had some interesting macro-level comments about Cowboy Football.

For all the talk about how he’s not maximizing because Oklahoma owns the rivalry, the last two Bedlam series games were nail-biters for the Sooners. Gundy also notably out-foxed Tom Herman in their big contest coming off OSU’s bye week and his team deployed the coverage that Oklahoma would later steal for their big win over the Longhorns in the B12 title game.

Oklahoma State is doing pretty darn well under Gundy and are a good defense away from being competitive for a league crown and even playoff berth. [Concerning Sports]

While the offensive premium slid a bit in 2018 and the defense did more regressing than progressing, it’s easy to sell optimism on a new quarterback with a cast of developed characters.

• This analytics-based prediction that has Gundy’s Pokes in the pre-season top 25 touched on the biggest reason why that’s a good call.

Considering OSU won just seven games last season — six in the regular season and an extra for good measure in the Liberty Bowl — a No. 22 beside OSU’s name sounds more than fair in the preseason.

But why is OSU considered a preseason top-25 team (besides, of course, our Lord and Savior™ Spencer Sanders)? Surprisingly, a lot of it has to do with OSU’s recent track record and cachet built up.

When you’re in the high 20’s rounding out your record, you’re looking at who’s going to finish in the upper middle of their league – the mainstays of the top quartile. Mike Gundy has proven (more often than not) that he can find dudes to finish behind the top two or three.

• There’s not a lot of hope to sell with the upcoming schedule for Cowboy Basketball.

Unfortunately for the Cowboys, their next three games are against other teams fighting for a Big 12 title, as OSU heads to Lubbock on Wednesday to play Texas Tech before hosting Kansas in a week.

Within reach of a regular season title and a higher seed in the NCAA Tournament, those teams will be motivated to put a hurting on the Cowboys. [PFB]

I’m most interested to see if Boynton can continue his regular season streak against the Jayhawks on Saturday. As ridiculous as it seems, the odds appear in the Cowboys’ favor.

Help us keep the tradition alive on Saturday morning in GIA. #okstate #c2e

• Jordan Brailford was somewhat unique as an OSU-guy – a four-star invited to the right All-American games – but he wasn’t in how he made his impact.

Because of serious leg issues that dated to his high school career, Brailford’s college career stalled for most of three years. In 2014-16, he played in only 10 games for the Cowboys.

After he finally got healthy, Brailford was a force. During the Cowboys’ blowout victory at Pittsburgh in 2017, he sprinted 21 yards — from a starting position 9 yards deep in the Panther backfield — to tackle a Pittsburgh wide receiver.

When NFL scouts study that video, they’ll love the combination of effort and speed. [TulsaWorld]

Just look at who surrounded him on the defensive line last year – Cole Walterscheid, Jarrell Owens, and Trey Carter, guys that took years to develop. Brailford came in more touted but his timeline for impact fit the mold.

• These were some solid thoughts on needing idle brain time – as someone who fills spare moments with podcasts and audiobooks it was challenging to read.

None of this may seem like a problem. After all, why waste time doing nothing when you could be doing something fun or productive? As long as you’re occupying your mind with (mostly) high-quality content, what’s the harm?

“The research on learning is extremely clear,” says Loren Frank, a professor at the Center for Integrative Neuroscience at the University of California, San Francisco. “To learn something well, you need to study it for a while and then take a break.” [Quartz]

• Just finished this biography on the Guinness (Irish beer) family – not a beer guy but loved how the family managed the company and gave back to the community. There’s a prominent faith-based storyline as well, it’s written by a clergyman.

• This faith-based read on not avoiding difficult folks was convicting