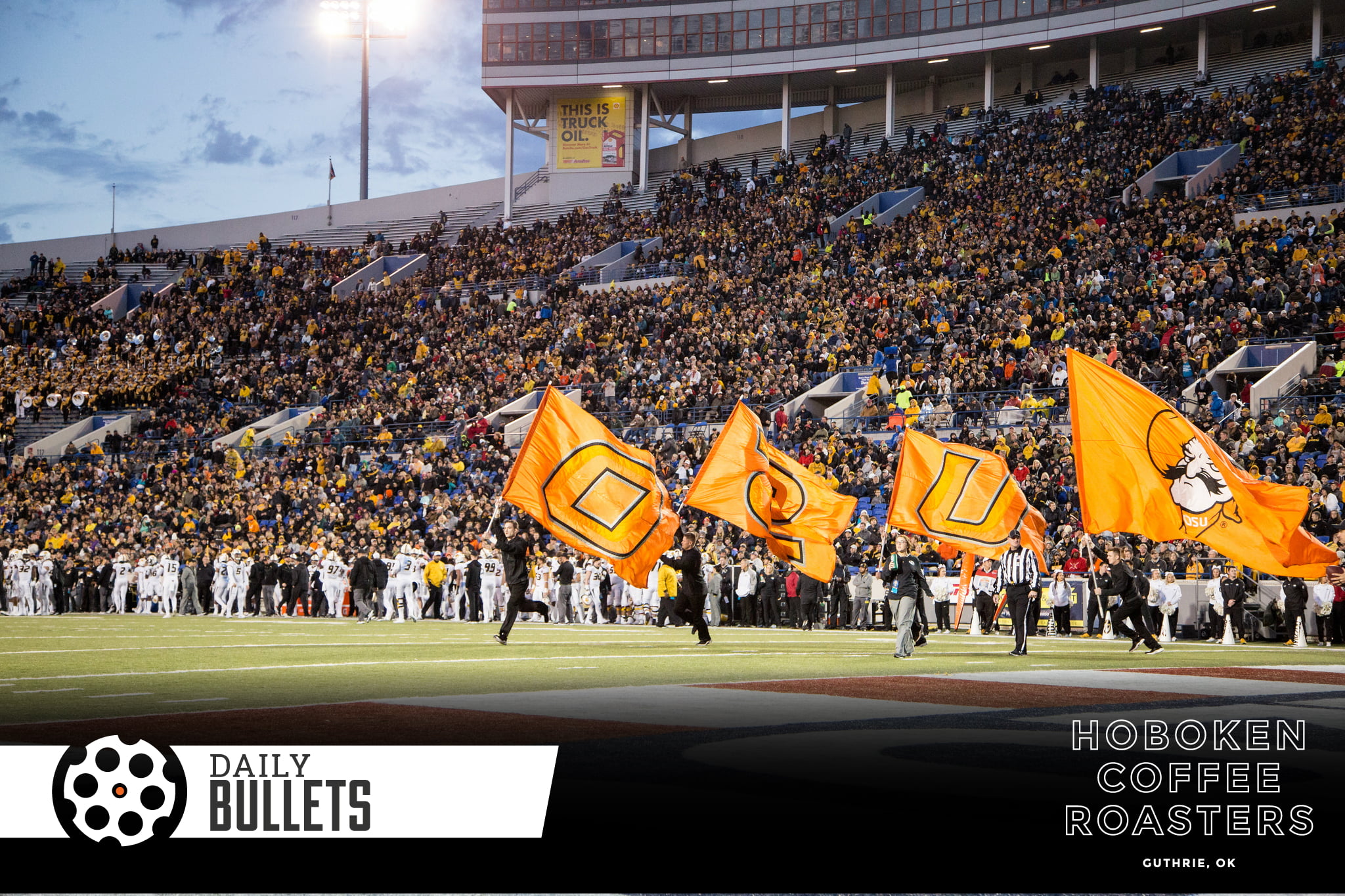 Bedlam round one. If things go south, remind your Sooner acquaintances how “only football counts” and that if OSU had a kicker, they would have been up three late in Norman.

With the new Bullets format, Saturday will be in bulk a chewing on what was big over the week – here are the top five most-viewed articles over the week.

• Most Viewed (No. 1): Who Might Gundy find to succeed Yurcich? –  The $800k question – who’s replacing Yurcich. Glenn Spencer may have been Mike Gundy’s only predictable coordinator hire while the rest have resulted in more “do you know who that is?” than “dude, we got (rising star)!” We recognize this but can’t help but give ourselves and you some options to process through.

• Most Viewed (No. 2): 10 Thoughts on Liberty Bowl – One of my favorite things here was Porter second-guessing himself for not picking the Pokes over Mizzou. Picking an unpredictable team in Mike Gundy’s strangest year is enough to drive the most astute fan crazy.

• Most Viewed (No. 3):. Why Dana left WVU for Houston – Something Boone pointed out here that I really liked was that Houston isn’t only a better paying job but it’s a better job to interview from. Barring a CFP appearance or conference title from West Virginia, there’s not a lot of ADs knocking on your door.

Do more with less fan support and budget, recruit the pants off the state of Texas and win an easy conference and you smell like a rejuvenated candidate worth betting fields of West Texas Intermediate on. This Tramel read is complementary reading. on the topic.

• Most Viewed (No. 4):. Yurich Expected to Leave OSU for OSU – PFB proudly reported (before others) that Ohio State “barring unforeseen circumstances” would be headed to Ohio State. Seeing the site transition to a news-reporting, credentialed outfit asking Mike Gundy questions at Media Days has been a blast.

• Most Viewed (No. 5): FCS Playcaller Emerging – If Mike Gundy, the hirer of the stodgy veteran Bill Young and the unpredictable Dana Holgorsen,  of the cerebral Lego king of the Great Lakes Mike Yurcich and the brazen, NFL-level offensive savant Todd Monken, were to become predictable, Eastern Washington’s Bodie Reed deserves all your bets. It seems like the smartest place for your money should is on the field over any of the favorites.

• Looking at the longevity of the career of OSU golfer Charles Howell (turned pro in 2000!) and an interesting question he was asked in a recent interview: would you rather win majors or have a solid 20-year career?

“I wouldn’t [trade careers with John Daly – 177th in career winnings]. As painful as that is to say, because he’s won majors. I am proud of the consistency I’ve had and the finishes I’ve had,” Howell said.

“When I went to Oklahoma State I wanted to see how good I could be. But if you’d have said, ‘Charles you’re going to have a 20-year career on the PGA Tour,’ I would have signed up in a heartbeat for that.” [Golf Channel]

Gosh, that’s a good question – would you rather climb to the highest peak of your profession intermittently or hang out in the top flight for 20 years?

• This on the banning of fake-news from a free speech perspective is fascinating.

(F)ree speech should not be sacrificed to combat fake news. Adopting legislation to shield against fake news has major implications and is highly perilous. When the printing press was invented, it brought along a radical shift in information technology. The same has happened in the digital age. [FfEE]

Doing away with a media outlet instead over discerning credibility of an outlet seems extreme. Now – creating some sort of incentive for an outlet to have the primary purpose of informing over entertaining…

•  Reading a post about tracking how much you read unearthed some questions about doing something you love about performance.

And yet, when I didn’t have a specific, numbered book goal, I didn’t read as much as I wanted to; early on, I found that counting the books I read reminded me to create time for something I loved…

Is it better to have a fixed goal you only approach, or to have a vague, unquantifiable one you achieve by default? For 2019, rather than aim for a specific number of books, I wrote down that I wanted to “read for fun,” and I felt very evolved and chill about it at the time, but now I wonder if I’ve just permitted myself to stagnate. [The Cut]