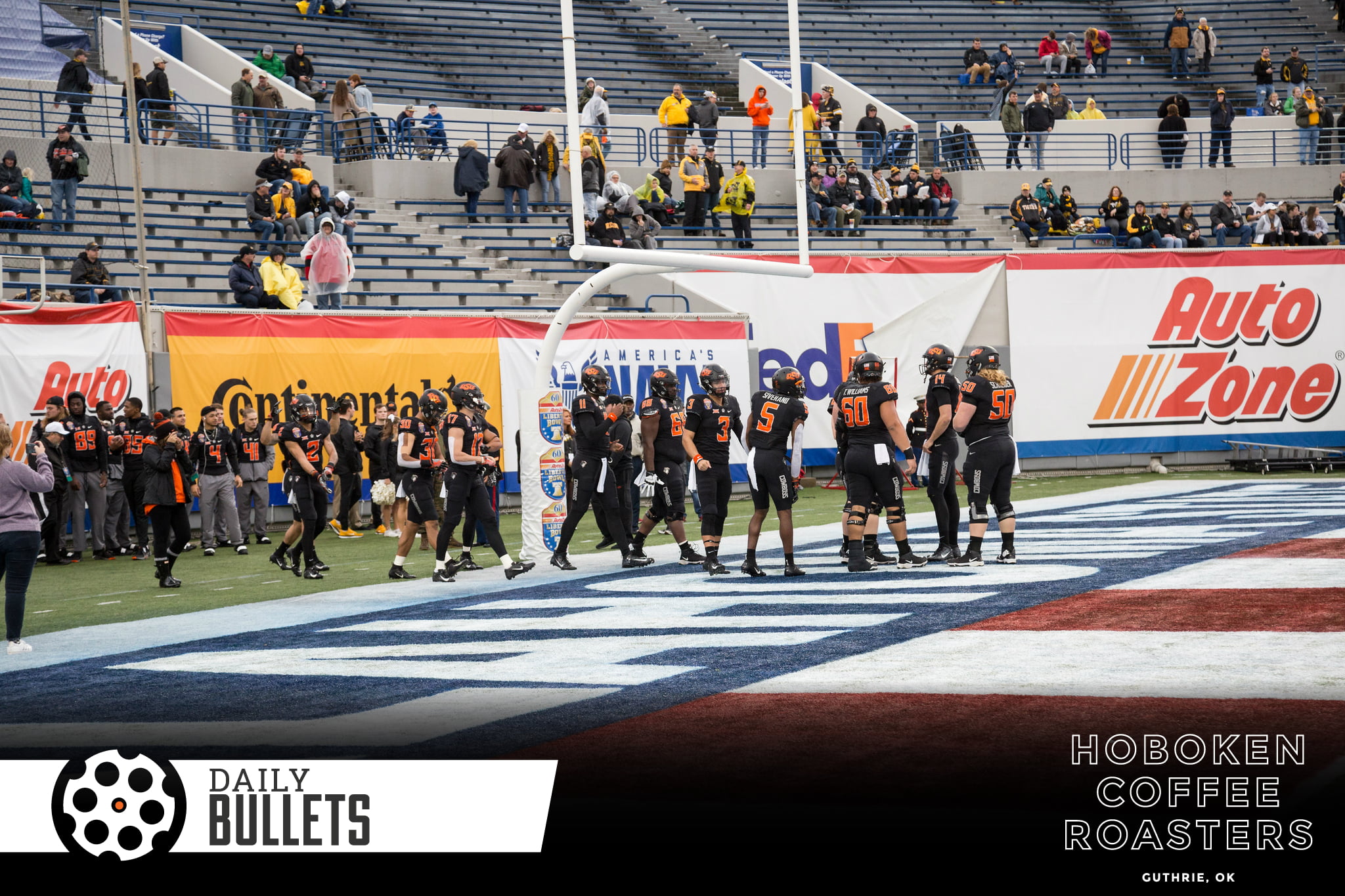 Good morning. We are nearly at 1,500 people receiving the Bullets via email. That’s amazing! And like I noted on the site, you can expect an email from us this Wednesday with a discount to our store to start off your 2019. Thank you for supporting PFB!

• I enjoyed editing this piece by Marshall Scott on predictions for 2019. It was a nice reprieve for what could be instead of what currently is, especially the part about another big time recruiting class.

Davis will only be the beginning, though, as Boynton will (barring redshirts or transfers) have to fill scholarships for Cameron McGriff, Lindy Waters, Thomas Dziagwa and Curtis Jones. That’ll be another big class, and, according to 247, Boynton an Co. have dished out thirty-one (!) 2020 offers. [PFB]

• Gundy is going to put this freshman on the front of the media guide if he keeps giving quotes like this!

“I’ve always been an Oklahoma State fan. Ever since I can remember, I’ve been watching their football games and basketball games. Then I got offered, and I didn’t really have any interest in other schools.” Aside from being a Cowboy fan, Russ plays in a similar offense at Plainview, and OSU aligns with Russ’ future goals as well.

“I want to get an agriculture degree, and that’s probably one of the best schools to do it at,” he said. “All of it is just about perfect.” [NewsOK]

I’m not sure we’ve talked enough about how well Josh Henson has stocked the cupboard. Are these elite offensive linemen? No, but OSU just needed bodies when he got to Stillwater, and now they have plenty of them. It will be interesting to see how that pays off — if at all! — in the next few seasons.

• My guy Tom Fornelli ranked all the bowl games. He had OSU-Mizzou at No. 5.

Man, watching this game you started to wish Missouri was still in the Big 12 so we could see this matchup every season. It was a video game for the most part, as the two teams combined for 1,139 yards of offense and nine touchdowns, but of course, it was Oklahoma State’s defense forcing a turnover on downs in the final minutes that ultimately decided the game. [CBS Sports]

• Zach Lancaster wrote about Bedlam, the rest of OSU’s season and how it will connect from 2018 to 2020.

This team is very much a work in progress, but the horizon is bright for this team, very bright. As the season progresses, this team will progress and with fan support, could be a very exciting and fun team to watch also knowing that Mike Boynton has added some very talented pieces in the 2019 class that’s set to be here in June. [Go Pokes]

I agree with this. Next season is big for Mike Boynton because it’s tough to keep preaching optimism after missing the tournament in three straight years, but I feel pretty confident they’re going to be good with that incoming class. For me, 2019 is all about developing current pieces around those freshmen.

• Nobody in this article — including the writer, Berry Tramel — flat out says that it’s nice to be rid of Trae Young, but the subtext is pretty clear. In the wake of OU’s win against OSU on Saturday, the Sooners and most involved seem to feel they’re better off (?) as a team this year.

Kruger is slow to denounce the 2017-18 Sooners, who did ascend as high as No. 4 in the nation and provided frills and thrills. “Very seldom do you have a Trae, doing things he did skill wise,” Kruger said. “But again, it was maybe the other end of what’s kind of normal for us, for sure. I think the offense has a better chance to come along at this point in the season than maybe the defense (from a year ago). Feel like we’ve got a better chance with this group to keep getting better.” [NewsOK]

Oh, and Bill Haisten wrote pretty much the same thing.

On any given night this season, any of four Sooners — James, Manek, Doolittle and Miles Reynolds — might lead the team in scoring. There isn’t a reliance on an overwhelming figure like Trae Young. There have been and will be fluctuations in OU’s offensive performances, but the foundation of this Kruger team is defense. Not dazzle. [Tulsa World]

What a callback here!

This reminds me of the Daniel Bobik block play against @jameernelson to send #OkState to the Final Four! https://t.co/N2t2mnjpXR

The No. 2 recruit in the country for next year has OSU in his top 11.

So blessed to be where I am today??? pic.twitter.com/DKCfumCjJM