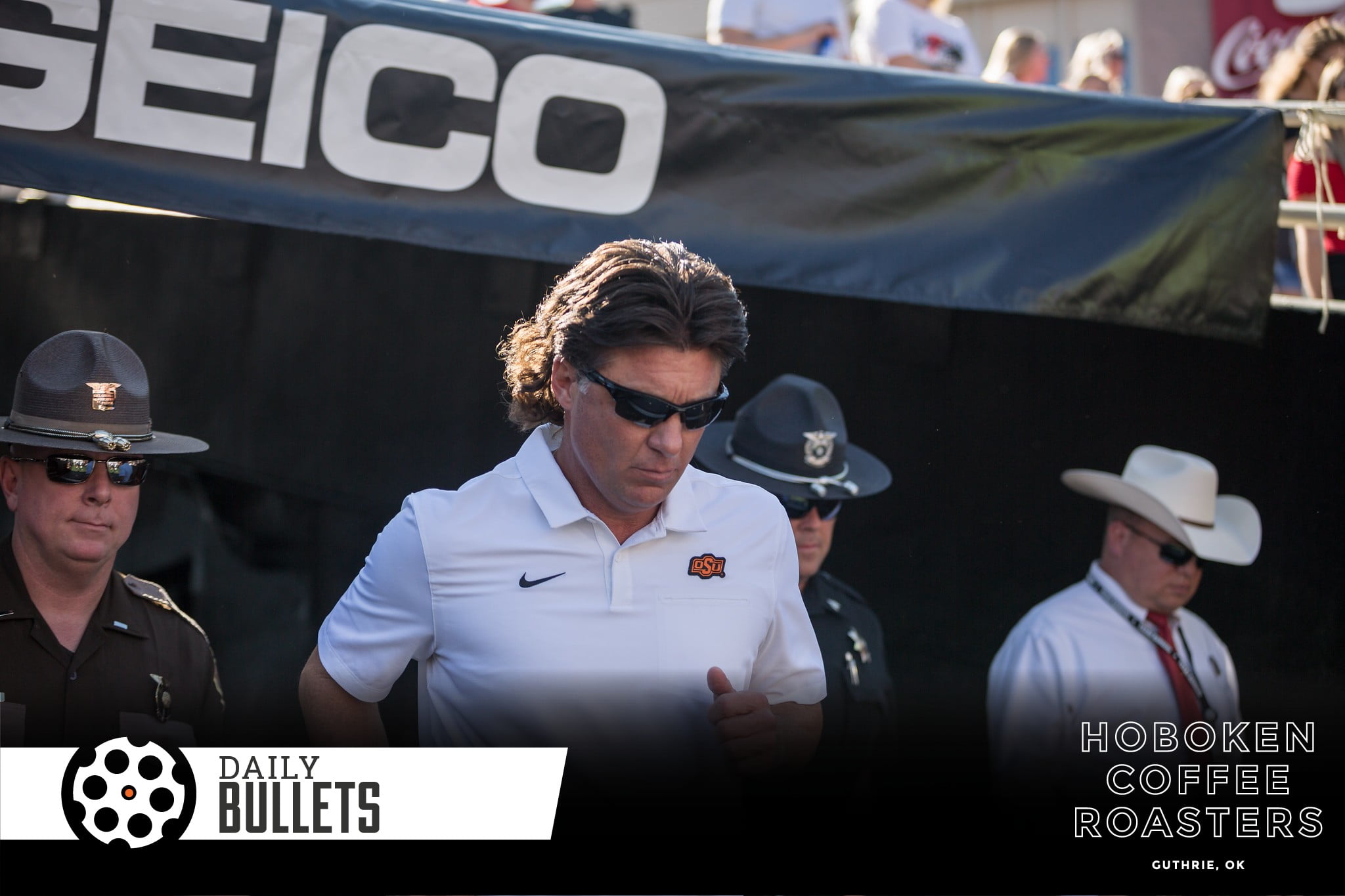 • When you talk about the finances of college football and compare it to the other sports leagues, you have to understand one fundamental difference: it’s not a matter of optimizing revenue, it’s a matter of getting what you can.

During the negotiations between MLB and the MLB Players Association earlier this year, the league’s owners wanted to limit the number of games because they said they would lose money for every one played without fans. In college football, the opposite is true: Schools want their teams to play as many games as possible because their athletic departments live off of prime cuts from the football cash cow.  [The Ringer]

I’d recommend slipping the piece the excerpt is pulled from into your weekend – it’s super insightful about the dynamics at play.

• Lost in the Mike Gundy t-shirt/unfriendliness/ COVID economics situation is perspective looking in one direction – forward.

I think what gets lost in the clamor and — at times anger — of all of this is that sometimes (most of the time?) change for the better involves discomfort on the front end. This has been written elsewhere, but it’s not unreasonable to think that Chuba helped set Gundy up for a better next 10 years than the last 10 years. [PFB]

Based on findings, we know Gundy isn’t behaving in a racist way (a great thing), has been less than friendly towards is his players (a subjectively negative thing), and he has an opportunity this year to remedy that latter point where he has the time.

• OSU needs to bring in a running back like this most years. There’s too much skill talent out there each year. If Deondrick Glass doesn’t start to pop this year, the depth chart gets shallow real quick with Chuba Hubbard (pro ball) and LD Brown (graduation) moving on.

• OSU v. OSU = not this season. If football is played and the Big 12 plays non-conference ball, here are some favorites that now have an open date the first week: USC, BYU, Michigan… Bama.

With @BeaverFootball having been slated to visit us this season, the @pac12 decision to play only conference games has an obvious impact on our home football schedule. We will explore our options and communicate with our season ticket holders in the coming days. #GoPokes pic.twitter.com/4ZMPd8ES5O

• Two-sport Bailey says to mask up so she can ball:

• My opinion has been changing regularly but here’s the thing: I think it’s fall or bust. Unless a Christmas miracle happens and we get a vaccine unexpectedly early… there’s not a positive reason to wait five months. What say you?

• No. 1: Mike Holder’s confidence growing about the NCAA appeal

• No. 3: Football probe could be turning point for Gundy

• No. 4: Five thoughts on Stillwater Stars’ loss in TBT

• No. 5: Montreal Pena jumped out of the gym