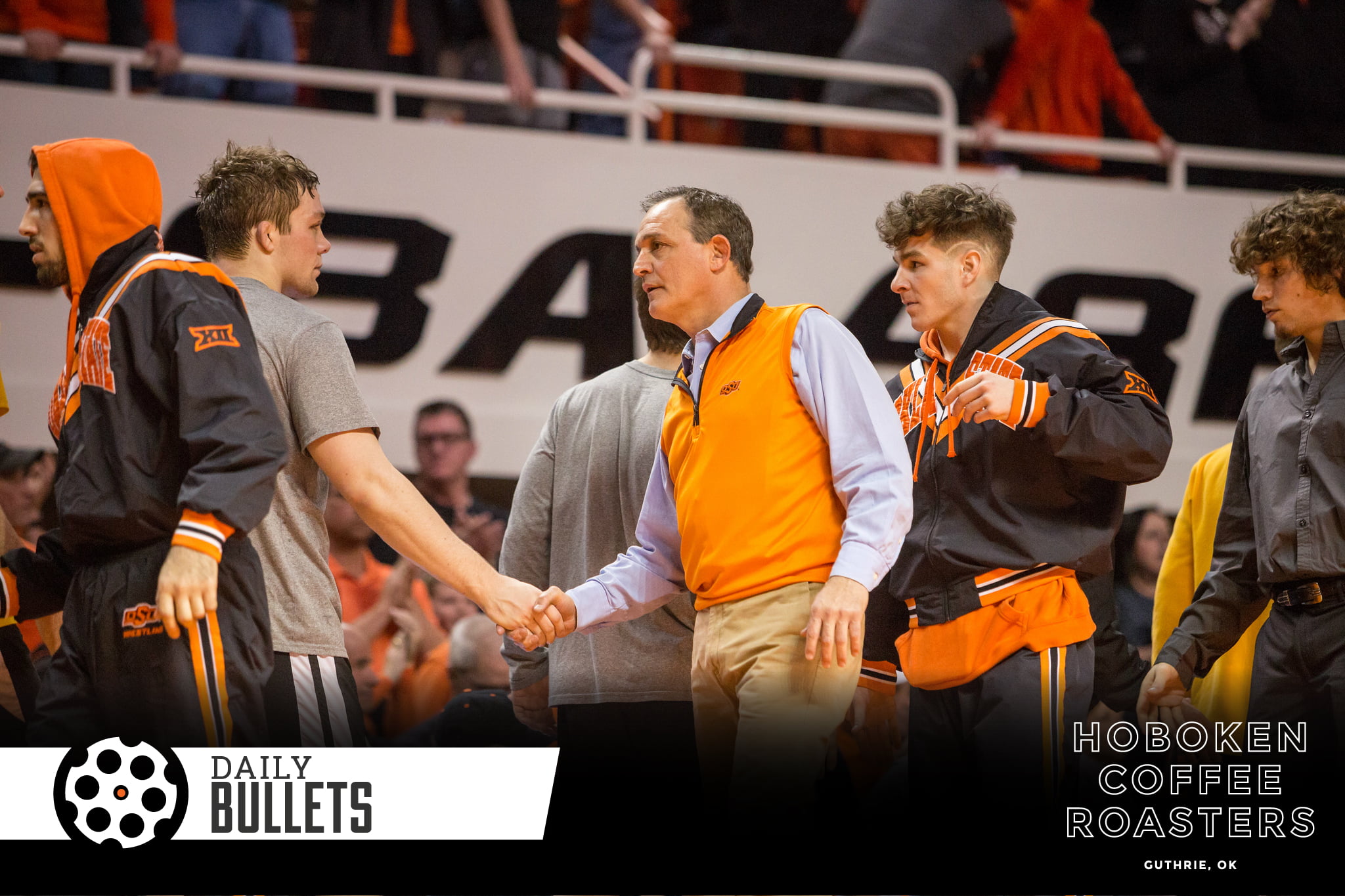 The Big 12 tourney in KC is developing some tradition to it – Pokes tip at six for a chance to avenge the massive K-State loss. Here’s a solid overview of the Big 12 teams going into the tournament.

• How much of a difference will the new offensive coaches make this year?

Sean Gleeson will surely have a chance to put his stamp on Oklahoma State’s offense with some of the philosophies he developed as Princeton’s offensive coordinator.

Those schemes will mesh with what Oklahoma State has already developed under Gundy and the offensive coordinators who have come through Stillwater.

Offensive line coach Charlie Dickey also replaces Josh Henson. Following their progress as they acclimate to the Cowboy program will be a consistent story over the coming months. [TulsaWorld]

Not only are you exchanging Gleeson for Mike Yurich but you’re swapping Henson for Dickey as well. Associate head coach Kasey Dunn will remain the same but with multiple moving pieces, it’s a premier time to see how much Mike Gundy calls the shots versus his OC and veteran O-line coach.

• Berry Tramel had an excellent profile on the Smith family patriarch, Mr. Lee Roy Smith, Sr. Did you expect any less character out of the dad of multiple world-class wrestlers?
I loved this line he was on the record for saying to one of the Smith boys.

Lee Roy Sr. financially and emotionally supported his son the entire way, but also said after the loss in federal court, “God didn’t promise us justice on this earth. I will tell my son that the best thing to do now is go to church, say a prayer and then go fishing.” [NewsOK]

Talk about life perspective – you can understand why so much character and success have come from Mr. Smith’s lineage.

• It’s hard to remember but if you squint your eyes, the 2013 Cowboy Football team was one of the best in the country for a time.

For a brief period of time in November, Oklahoma State was suddenly the best team in the country. After mucking through the opening few games, the Pokes won six games (three against ranked teams) by an average of 26 points, capping the run with this demolition of a Baylor team with national title hopes.

(OSU then lost to OU and Mizzou to end the season.) [Football Study Hall]

That Baylor walloping was immense – not unlike the TCU-pounding a couple of years later.

• Mike Gundy gave a bit of an insight as to how he found his new offensive coordinator.

Gundy explained that Gleeson was not hired nearly like Yurcich, Mike Yurcich was off the grid coaching in Division II football and Gleeson was a more known commodity. He had made headlines in two short seasons as the offensive coordinator at Princeton… [GoPokes]

That’s fair. If offensive coordinators were minor league baseball players, you could say Gleeson was a double-A prospect showing promise while Yurcich was probably a single-A guy who just won a starting job.

• A repeat visitor was sort of a surprise during the first day of spring ball on Monday.

The most notable in physical presences was Arkansas grad transfer wide receiver La’Michael Pettway. You can’t miss him walking around as he looks like a linebacker, but has all the qualities that teams look for in a receiver. [GoPokes]

It’s still interesting to me that the Pokes are after another receiver. From talking with an Arkansas fan at the office, Pettway, a former four-star recruit, was being counted on to be the No. 1 guy and struggled to deliver.

The Pokes have an alpha receiver on lock, dependable, dynamic slots in Landon Wolf and Dillon Stoner but could use another talent on the outside.

• This isn’t a terrible idea for Corndog after his surprising vertical.

• What happens to all the beads after Mardi Gras

• Paul George for MIP is reasonable

• The line between an accident and a crime