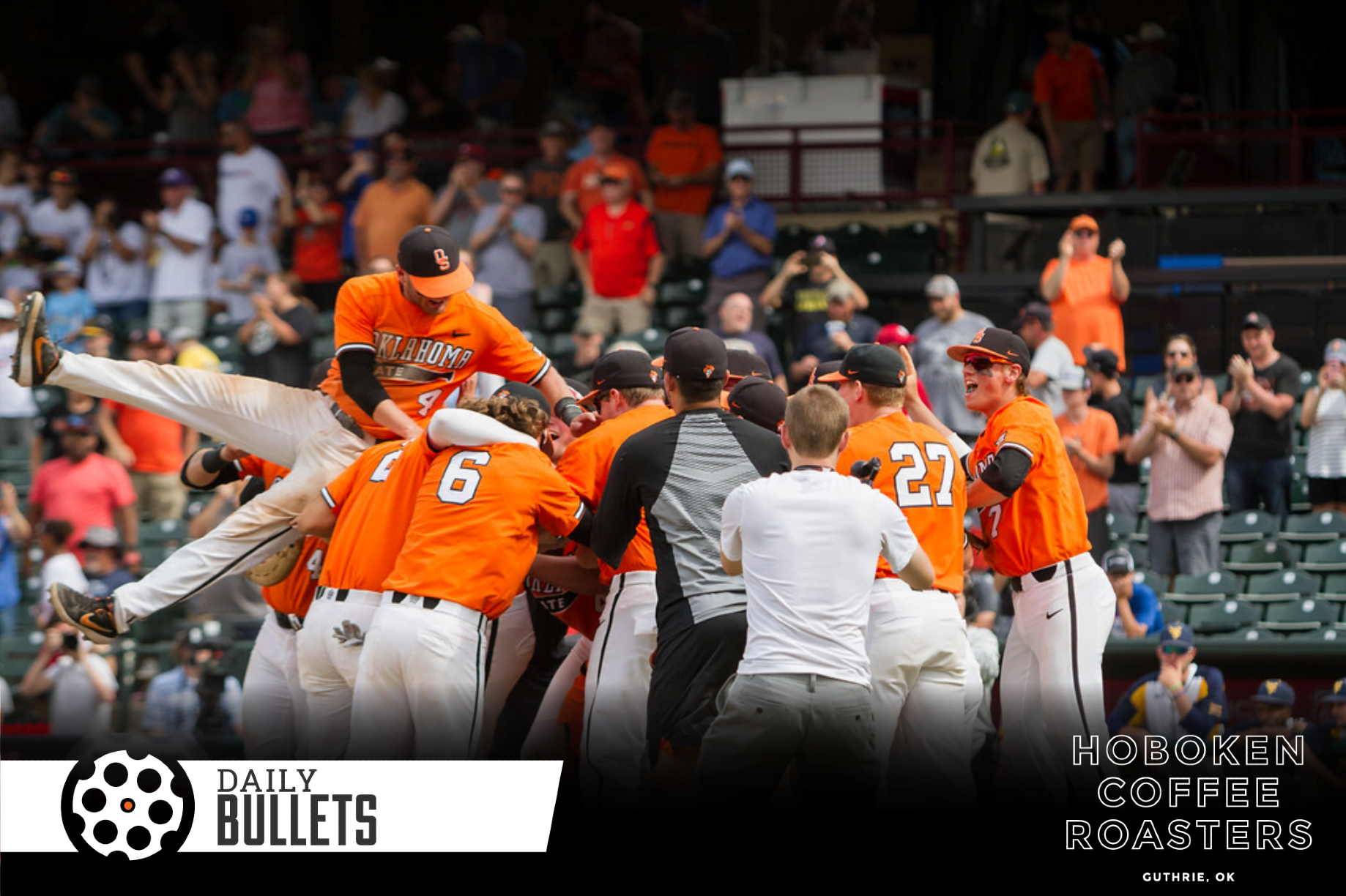 Happy Memorial Day, and thank you to all of our veterans for serving, especially this one.

• The big question now that OSU has secured a regional hosting bid is whether they’ll be a top-eight seed and get a super regional, should they make it through regionals first.

At 7:30 p.m. Sunday night, the NCAA will announce the 16 regional hosts for next weekend. OSU is a near-certain lock to be one of those 16 (ed. note: they were), but if the Cowboys can land in the Top 8, they would play games at Allie P. Reynolds Stadium up to the College World Series.

The Cowboys entered Sunday ranked eighth in the RPI. Now at 35-18, OSU is the only Top-10 RPI team without at least 40 wins, but no one in the Big 12 has reached that mark. [PFB]

I know we shouldn’t be into nostalgia in determining these things, but if it comes down to it, I hope the NCAA chooses one last finale at Allie P. (and also have absolutely no confidence whatsoever that this will happen).

Here's Josh Holliday with some ? on sports in general. #OKState pic.twitter.com/eeWI886VlT

• The Sam Show story has been an interesting one, and this article outlines the bumps in the road OSU experienced along the way in integrating somebody who wasn’t one of their own (until now).

Show had a lot to give, too. A top-notch pitcher and a big-time hitter, she’s become the Cowgirls’ biggest contributor this season. And though you might never guess it now — every Cowgirl was hugging and high-fiving after their NCAA Super Regional upset of Florida State on Saturday — integrating Show into an already-talented roster was not necessarily easy.

At one point, a players-only meeting was called by seniors Madi Sue Montgomery and Taylor Lynch, but the gathering did not include Show. She was the reason for the meeting, which Gajewski gave his blessing. [NewsOK]

• OSU is absolutely roasting teams at the NCAAs in Fayetteville as we head into the final day of stroke play with the Pokes teeing off at 12:30 p.m.

They are maybe the best OSU team in history, and now they have three players in the top five on the leaderboard, and none of those players are Viktor Hovland, who was low am at the Masters and is the reigning U.S. Amateur champion.

Matthew Wolff leads at 7 under after firing a 69 on Sunday, but Austin Eckroat is just behind him at 5 under. Zach Bauchou is 2 under and T5 going into Monday’s finale. [PFB]

Was just checking on NCAA Golf Championship as Wake Forest made tournament 1st time in yrs. Oklahoma State is up by 25 after 3 rounds. 18 tomorrow and then 8 qualify for match play. Why Match Play ? We already know who the best team is !

• So Kenny G. gets his old squad in OKC. What a world.

It'll be #OKState vs. Florida Thursday night in Oklahoma City. Any interesting stories for that one?? ? #RoadToWCWS https://t.co/pdQYRWcsOY

• Also, was it a good weekend for OSU or nah?

Now, catch your breath, OSU fans, run your orange and black gear through the laundry and ready yourselves for more, they ain’t done yet. It could get wilder — much wilder.

As much fun as the weekend that was, was, allow yourselves to dream big — major trophies big. Just like the good old days, OSU has seized the spring.

The Cowgirls punched their ticket to Oklahoma City, their first trip since 2011, with a gritty Super Regional series win over Florida State, the defending national champ, on the road. Just as they have all season, they did it “For The Girls,” with a variety of players coming through. [Go Pokes]