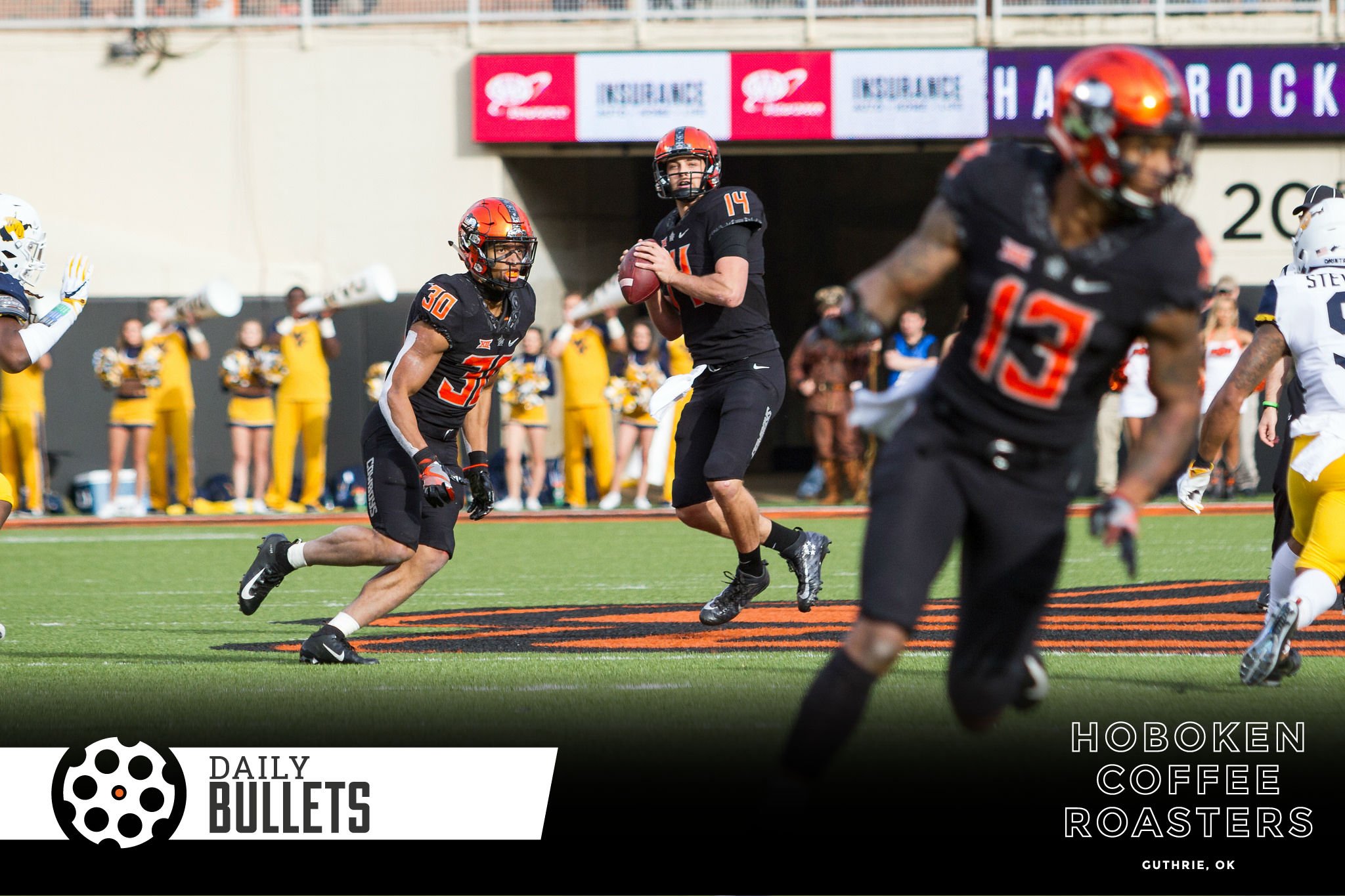 Deep in the Heart of Texas

While TCU is playing for bowl eligibility today, the Pokes are looking to climb to the top of the potential glut of six-win teams in the Big 12.

Here’s why the Texas Bowl is a likely destination: If OSU defeats TCU on Saturday, the Cowboys could be the fifth-most attractive Big 12 team to a bowl game. Oklahoma, Texas, West Virginia and Iowa State will likely be selected before the Cowboys, while, at seven wins, OSU might be a more valuable team than the winner of the Texas Tech-Baylor game.

If the Big 12 gets two teams into either a College Football Playoff spot or the New Year’s Six bowl games, the third-place team would end up in the Alamo Bowl. The fourth-place team — at this point, Iowa State — would be Camping World Bowl-bound. The Texas Bowl has the next choice of teams. [TulsaWorld]

Iowa State goes bowling less than millennials do, they’ll be able to happily slide in anywhere. OSU slides to the lowest rung of bowl games when reloading at QB, they’ll fit in just about anywhere on the lower end of the spectrum. But climbing as high as the Texas Bowl is probably as good as it gets at this point.

While Tylan Wallace is guaranteed money when watching the Pokes, Tyron Johnson has really shown up and produced over the last few weeks.

But it’s worth watching Tyron Johnson on Saturday. The junior has quietly put together a terrific month of November.

He caught just 21 passes in the first two months of the season (eight games), culminating with a one-catch, 6-yard performance in the win over Texas. But as Taylor Cornelius has improved over the season’s final month, Johnson’s productivity has risen.

Didn’t we pass this judgment after watching Cornelius for about a half-hour in the season opener against Missouri State? Haven’t we stuck to it since? Through rough goes against Texas Tech and Kansas State, the fourth-down sack at Baylor, the 2-point misfire in Bedlam?

Yep. We had him pegged.

The next time Cornelius got the ball after that interception was the first play of the second half. He ripped off an 11-yard run.

His next pass was a completion to Dillon Stoner. His next three passes after that were all completions, with the third escorting Chuba Hubbard to a touchdown.

Cornelius led his offense to a field goal on the next drive. The fourth quarter rolled around, the Cowboys punted once, and then Cornelius threw a touchdown pass, ran for one himself, and threw another to win the game.

We thought we knew. They were in his head. He couldn’t quite overcome. But hey, he’d always have his moment on the field among students, fans and family members after Texas. [TulsaWorld]

I think the fun narrative with Cornelius is that if at first you don’t succeed, keep plugging away and eventually you’ll help beat two top ten teams… It’s just not usually how the world works.

Not looking to manufacture anything here – but this piece interviewing Chuba Hubbard on J.D. King was fascinating.

Three takeaways from the loss to Villanova….Story of Alabama running back from Tulsa is wild….Jordan Brailford undecided on next year despite walking on Senior Day….Fun look at the Cowboys backup center that filled in during WV game….

This is a great recent memory for Pokes in Fort Worth. Love that uni combo too.

What a gesture here by Wazzu.

The Cougar marching band was on the field practicing the Husky fight song today because the UW band won’t make it after last night’s accident. The Coug band will play it in the absence. #GoCougs #AppleCup #KOMOnews pic.twitter.com/pYZaLPb76m