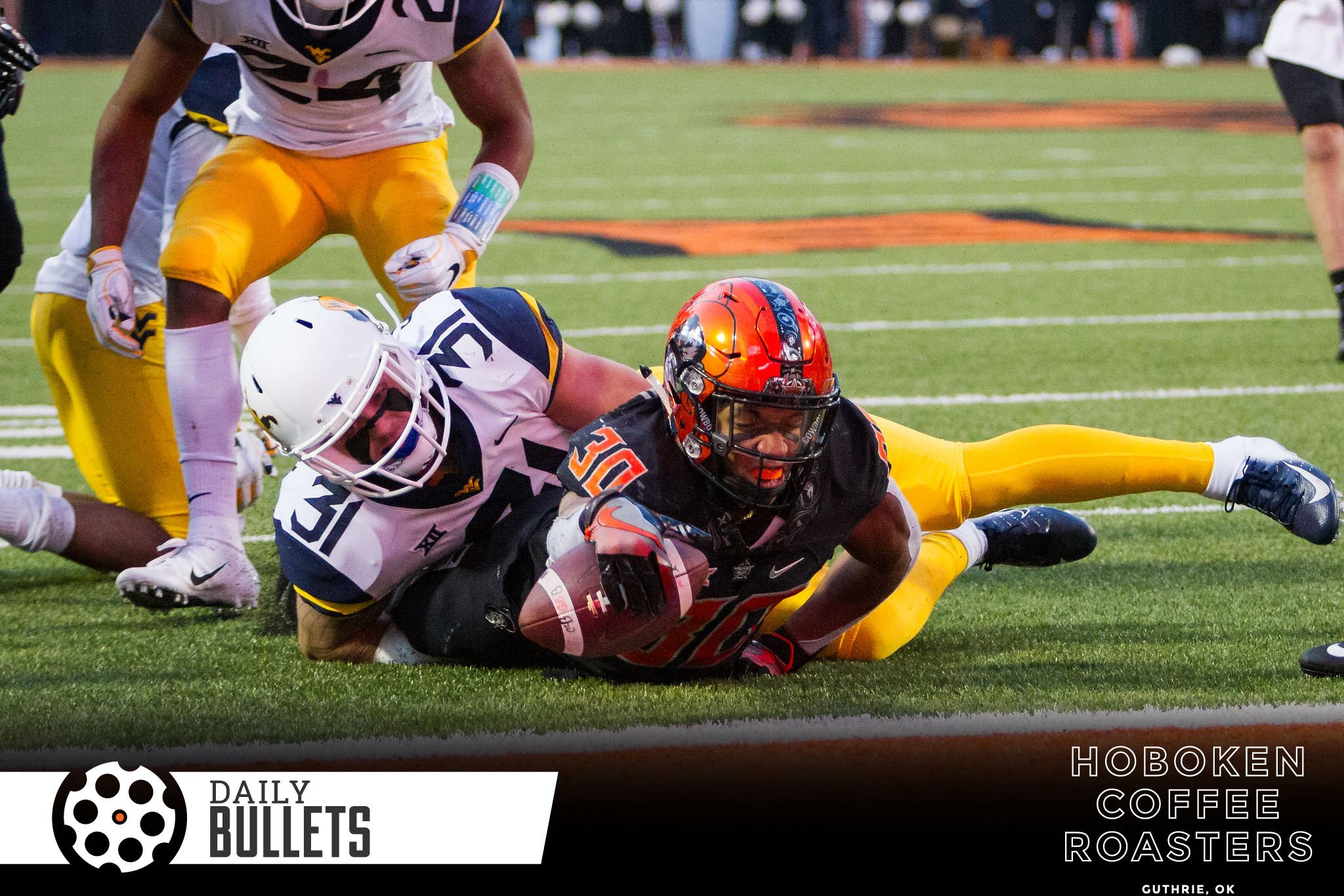 Ninth – and just the way you predicted by beating Texas, Boise State, and West Virginia.

Because of tiebreakers, the Cowboys finish ninth in the Big 12. The Big 12 filled all of its bowl slots. OSU bound for Houston, Memphis, Phoenix or right back here to Fort Worth for bowl season.

When the Pokes had the opportunity to shore up the inconsistencies and finish off a floundering Frog team on its last set of legs at quarterback, they turned in another lukewarm performance. It was all downhill after the terrific helmets.

The Cowboys finally got things going with a 10-play, 69-yard touchdown drive that more than doubled their yardage total, then put together two more touchdown drives after that. But the damage was already done. OSU had dug a hole that was too deep to climb out of.

Even with their late push, the Cowboys managed a mere 280 yards of offense, their first time below 300 yards since Texas in 2014.

Now, the Cowboys are left to await their fate. The bowl invites won’t be extended until next Sunday, but OSU had a chance to make a final statement.

Instead, it seemed largely uninspired. [NewsOK]

To reemphasize the point, the offense played poorly – watching the 30 first downs-per-game group disappear to see a 30 yards-per=quarter group show up. Uninspired, unproductive and most appropriately, unworthy climbing the bowl destinations.

Make no mistake, this ending was more fitting than a Frog-gigging would have been.

Tylan Wallace’s super sophomore season plateau’d with a bit of av-ur-ge play yesterday… but even with his mortal flaws, he’s still the best in the country.

Wallace made several mistakes against the Mountaineers — a few drops and a fumble — and added to a growing list of drops this season.

It’s not all that close, really.

“Coming in as a sophomore, I didn’t expect to have the season I’m having,” Wallace said. “I just wanted to come in, fill in my role and do what I can.”

What he can do Saturday is make a closing argument to All-American and Biletnikoff Award voters in OSU’s regular-season finale at TCU. A strong statement is what the Cowboys need to continue their forward momentum and what Fort Worth native wants in his hometown. [NewsOK]

Jenni C. breaks down how so much of Wallace’s numbers come in crucial, high-pressure times: leading to first downs and lots of points scored against ranked opponents. Now – a catch on that third down in the fourth quarter would have highlighted this quality, but nevertheless.

Cowboys take on LSU for third place in Advocare tourney today….On Harbaugh’s tough day at the Horseshoe – read to feel better about OSU’s Bedlam record….I agree with this on why 8-5 is substantially better than any result of six wins and a bowl….KU Basketball could be even better than they’re currently showing….Is icing the kicker effective?….Winners and losers from Week 13

This is exactly what the conference wanted – both flagships on TV the last day of the season.

Sources tell KENS 5 that Kliff Kingsbury is OUT as head coach of the Red Raiders. Texas Tech finished the season on a five-game losing skid. https://t.co/pQBOA5EzJN

This is the intrigue of a CFP with four teams – Alabama/Clemson and two of OU, Ohio State, Georgia, UW, or Notre Dame. Possibilities are endless.

Here’s some wild Black Friday shopping film for ya.