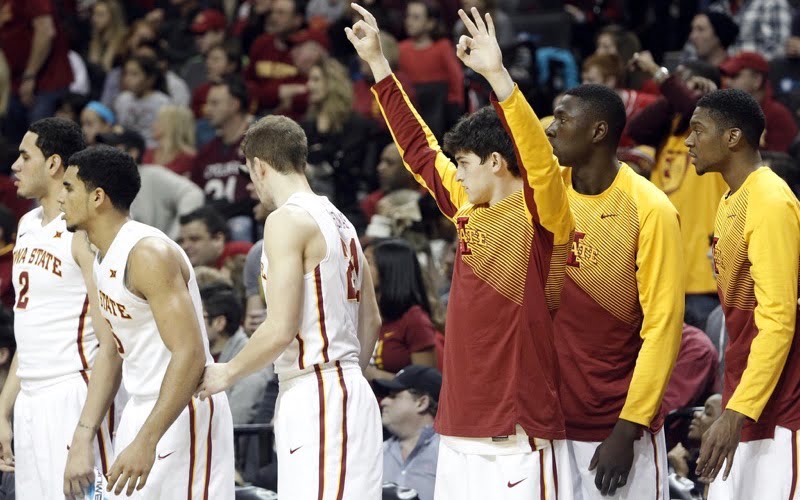 Can Iowa State keep its streak against OSU in Ames alive? (USATSI)

I exchanged emails this week with my buddy Chris Williams over at Cyclone Fanatic about what we should expect from the OSU-ISU game tonight in Ames. Here’s what we talked about.

Kyle: Chris, I have a confession. I haven’t watched Iowa State play this season though I’ve followed tangentially on Twitter…how does this year’s squad compare to the last few Freddie H. has pieced together in Ames? Is it all transfers or just 85 percent?

Chris: Actually, only 75 percent transfers – thank you very much.

For real though, it’s funny to me that you came out firing with the transfer talk. I can’t say that I blame you. After all, other than 3-pointers and overall awesomeness, that is what the national perception of Fred Hoiberg’s program seems to be.

The truth is that while Iowa State absolutely could not have made its recent resurgence without the transfers, four year guys like Melvin Ejim, Georges Niang, Naz Long and Monte Morris have been the lifeblood of this program.

Niang and Long are without question the emotional leaders of this Iowa State team and Morris could be the best player in America (he’s currently on pace to break the NCAA assist-to-turnover ratio that he set last year as a freshman) that not many people have heard about.

Speaking of four year guys, I see that LeBryan Nash is back for what, his 7th year at Oklahoma State? Is this guy on the Jess Settles plan (Iowa joke) or what?

In all seriousness, he’s your top scorer (along with Phil Forte) at 17.3 points per game. As an Oklahoma State guy, how would you describe Nash’s career in Stillwater? There was so much promise early.

He’s killed Iowa State on multiple occasions but I feel like Nash has never exactly reached his full potential. Is that a fair analysis?

Kyle: That’s probably fair as a national perception but he was never the Andrew Wiggins uber-athletic type that you need to be to turn pro at a young age and shouldn’t have ever been lumped in with guys like that.

Nash’s advantage is that he’s bigger and stronger than everybody else he goes up against it and he’s developed a legitimately good 14-foot jumper this year which makes him, when he wants to be, pretty deadly.

The problem is that offensive production ends with the two dudes you mentioned. OSU’s public relations folks keep pumping this “Nash and Forte are the leading scoring duo in the Big 12” thing like it’s a great thing but it’s actually not.

If they don’t play well then OSU isn’t going to beat anybody decent in conference.

I just realized today that our teams’ two losses have both come at the hands of Maryland and South Carolina. How weird is that?

Iowa State couldn’t have played any worse than it did in the Maryland game. The Cyclones shot 29.7 percent from the floor (second worst in the Hoiberg era) and went 6-for-27 from 3-point range. Fast forward to last Saturday when Iowa State made only 1-of-18 3-point attempts.

Maryland and South Carolina were both physical, aggressive teams. They packed it in and caught Iowa State on nights when the Cyclones couldn’t throw a beach ball in the ocean.

My apologies to you, but I have a feeling that the Cowboys are walking into Hilton Coliseum on one of the worst nights possible. Following the Maryland game, a refocused Iowa State team beat Lamar 96-59 (whoopee) and Arkansas (a NCAA Tournament team, in my opinion) 95-77.

The Maryland scores with our two teams were pretty similar, but I see that Oklahoma State was blown out by South Carolina. What happened in that game for the Cowboys? What kind of an effort do you expect from your team in Ames on Tuesday night?

Kyle: The South Carolina game unfolded for us like Maryland did for you. OSU shot 24.6 percent (!) including 5/24 from 3. It was hideous.

As for Tuesday I’m afraid I agree with you about this being a bad time to play Iowa State at home. OSU hasn’t been a good road team in general under Travis Ford and hasn’t won in Hilton since 2010 and hasn’t started 2-0 in the Big 12 since 2005 (what?)

Unless the Pokes get a career night from one of their ancillary players (Jeffrey Carroll, Jeff Newberry etc.) then it’s going to be a lengthy night for my fellas in orange.

KenPom.com gives OSU a 31 percent chance to win. I think those numbers should be switched.

Chris: I think Oklahoma State has better than a 13 percent chance to win. Having said that, aside from Kansas, nobody has won in Ames since Missouri did it way back in January of 2012.

Despite last Saturday’s loss, momentum around this program has never been higher. Expect the Cowboys to enter an insane environment tonight.

But you are right, Kyle. If a few guys step up for Oklahoma State and you guys have a great night from long range, this could absolutely be another nail biter that these two programs have become so prone to put on over the last three years or so.

I like Iowa State by anywhere from five to 10 points.

It’s been fun chatting with you. Let’s do it again in February.