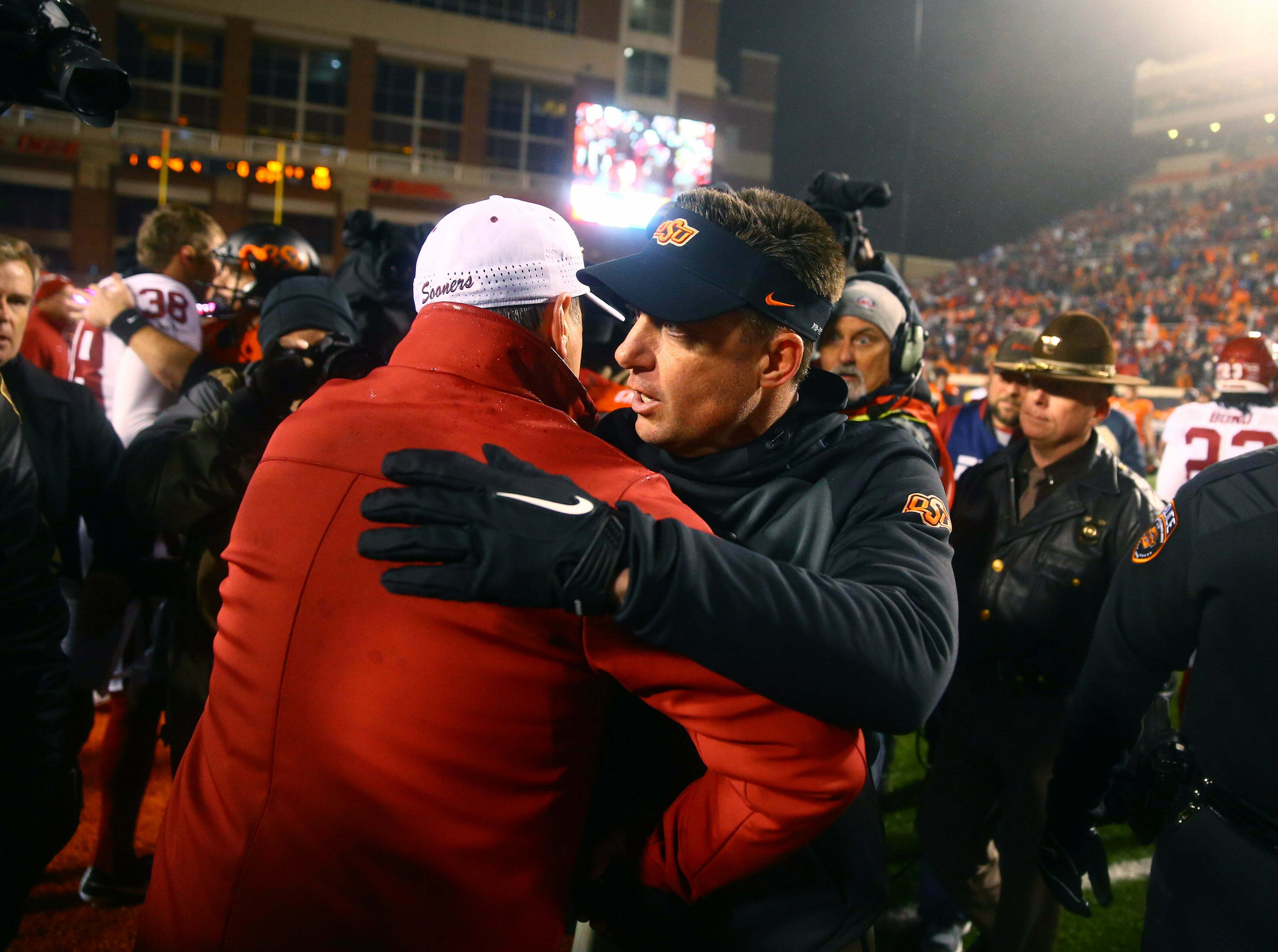 It is a question I think about a lot. Probably more than I should. Does Mike Gundy have an OU problem, or has his 2-10 record against OU simply been the product of OU being that much better than Oklahoma State at football?

The answer is probably not as simple as you would think. My gut instinct is to say that, “yes, of course Mike Gundy has an OU problem,” but then I started looking at the games, one by one, all 12 of them.

“What we’ve done is we’ve put ourselves in position — we just need to find a way to finish at the end. More so than what we have in some of those close games.”

Vegas lines are not the best possible way to assess whether a coach has a psychological issue agains a specific school or another coach, but they’re a good place to start.

Here is how Gundy fares as a favorite.

And as an underdog.

These don’t include pick ’em games (there haven’t been any in Bedlam in the Gundy era) or non-FBS opponents. If you look at these numbers, though, it’s easy to see where the Gundy detractors are coming from. Gundy has performed well below his average against all other teams when it comes to Bedlam.

However, not all favorites are created equal and the sample size of Bedlam is so small, I’m not sure that’s a completely fair indicator. And in rivalry games generally, you’re just trying to give yourself a chance to win at the end. I think this is the rub. I don’t believe that reasonable OSU fans care if OSU loses to OU. I believe they care if OSU gets throttled by OU with teams that are as good as OU (or in the case of 2013, much better).

So let’s create a two-headed report card for Gundy over the last 12 years. First, let’s look at when Oklahoma State should have won and didn’t and when they shouldn’t have won but did and grade Gundy on that scale.

So two minuses and a plus. The most egregious one was obviously in 2013. The only other time Gundy has lost as a favorite against OU was 2010 in that wild 47-41 game when Gilbert returned the kick with 2:51 left and Blackmon was dragging his leg all over Lewis Field.

Now we’re going to look at all the games that could have gone either way on the final few possessions. That’s fair, right? That’s what we want out of this game. I think it’s important to remember that no matter whether you actually agree with what plays were called and what strategies were deployed, all we can definitively go on is whether the games were close at the end.

I defined whether you should have given yourself a chance to win at the end by whether the line was less than 10. So last year it was OU -12 which to me means OU was supposed to roll, and they did. In 2015, OU was favored by just a TD, and OSU got absolutely annihilated.

Two minuses and two pluses. Even. Again, maybe using Vegas lines is not the best way to do this, but it’s the easiest and probably fairest method. I think we forget that OU was so heavily favored last season, but that doesn’t absolve Gundy of the display Oklahoma State put on in Norman.

And that’s the crux of the thing. I think there’s a real argument to be made that 2013 is the only game of the 12 that really should have gone differently based on how good the two teams were. But I also think there’s an argument on the other side of things that Gundy needs to stop coaching like he’s guiding Bama to a victory over Kentucky. Both things can be true.

“I don’t want to take anything away from them,” said Gundy on Monday. “I didn’t think we played very good in the second half last year. We kind of fizzled out. We missed some tackles. We were a little bit limited (in 2015). I wish (Gilbert) would have caught the ball (in 2013). You wouldn’t be asking me this if he would have caught the ball. That was a game that talent-wise, we were every bit as equal as them.”

But in nine of the 12 Bedlam matchups thus far, Oklahoma State has not had the better team. I believe that based on health and talent, and the Vegas lines reflect that. In fact, the only years they have definitively had the better team were 2011 and 2013. They’re 1-1 in those games. Is that a problem? I suppose when Big 12 titles are on the line, it is.

“I don’t think that anybody could debate the run they had in the 70s up through the mid-90s that maybe there could have been a mental edge,” said Gundy on Monday. “With respect to both sides, since 2007, we’ve had some pretty good games.”

It’s true. The games in 2006, 2010, 2012, 2013 and 2014 were all barnburners, and only one of them came up orange. Is that a problem? Maybe it is. But also maybe it isn’t. Maybe OU has just been one of the handful of teams nationally that has had a better program than OSU (oh, they have been), and maybe OSU would have the same 2-10 record against its rival if its rival was Ohio State, LSU, Wisconsin or USC.

This is winning percentage for Power 5 teams since 2005 when Gundy took over. OU has been a top three school in the country for all of Gundy’s head coaching career. That’s tough to control.

As usual when it comes to sports the answer to all of this is in the place we would least like for it to be, right in the middle. Does Mike Gundy have an OU problem? I think it’s probably in his head a little bit. But the bigger issue is that the Big 12 on the whole has had an OU problem, with the evidence being 10 conference championships in the last 17 years. The fact that Oklahoma State is the closest team annually to slaying that dragon combined with its storied history of being on the wrong side of this rivalry tilt makes for an embittered set of fans.

It’s hard to argue against that, but Gundy has a chance to change the narrative once again in this season’s game. OSU is going to run the ball a lot, be prepared for that. That’s not conservatism as much as it is wisdom. But there are other ways for Gundy to shed the orangutan (it was a gorilla before 2011 but has been bedowngraded). I think we all hope to see Gundy let it ride a little bit and flip the script in Lincoln Riley’s Bedlam baptism.

Because if he doesn’t, it’s going to be yet another year of “What’s Gundy’s deal in Bedlam” questions, and the longer that goes on the fewer answers any of us will have.