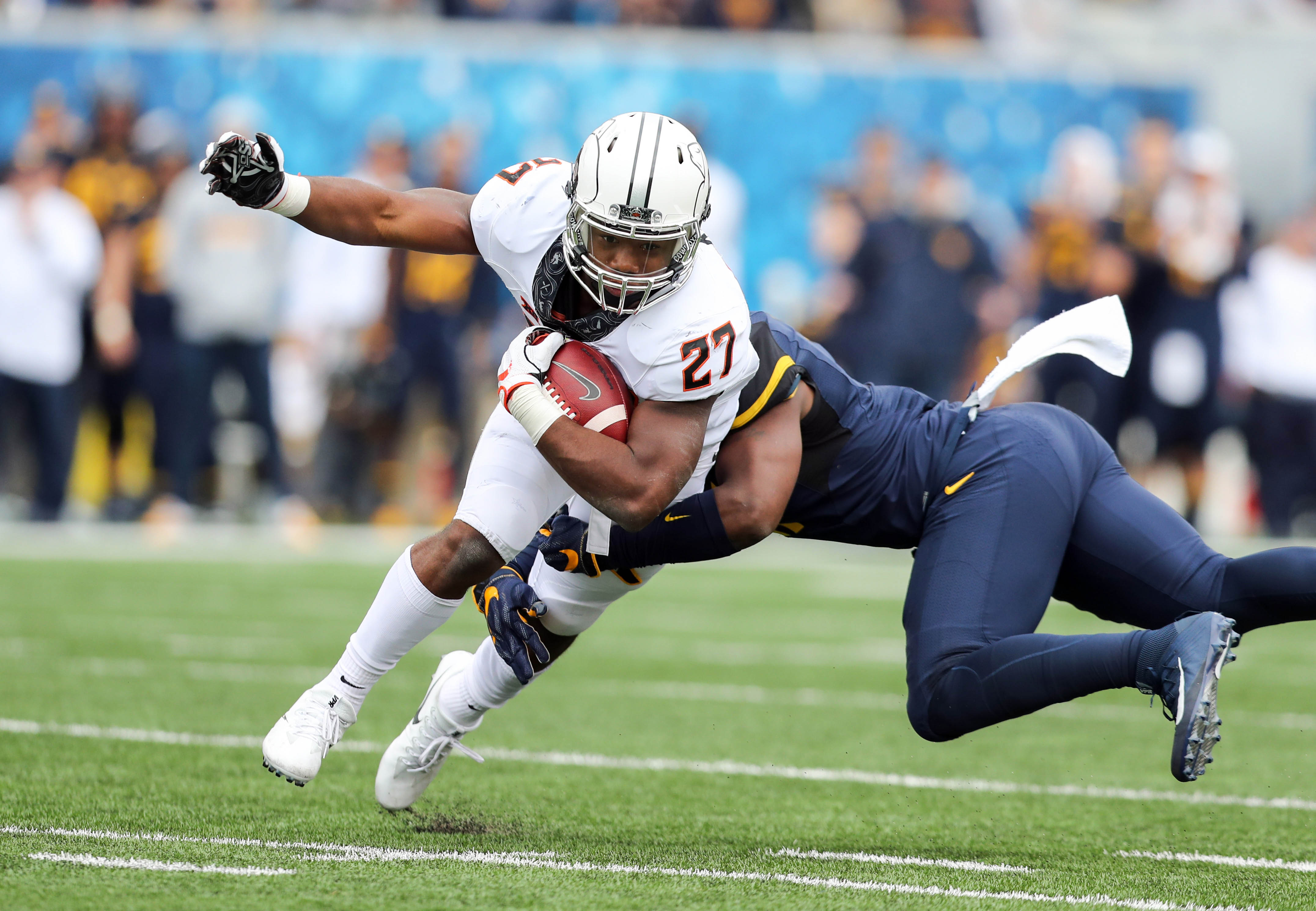 Oklahoma State ran the football 56 times on Saturday against West Virginia. They ran it 51 times against Texas and another 44 against Texas Tech. Nobody in the Big 12 has run it more in conference play than Oklahoma State. Their 41.1 rushing attempts per game leads the conference and would be their highest since 2009 (aka the year Gundy was trying to not get Zac Robinson killed without Dez and Kendall Hunter).

So what gives? Are they hiding Rudolph? Are they scared to throw it? Why does the best passing team in the country rank No. 1 in rushing attempts in the league and just No. 6 in passing attempts (in Big 12 games)?

“They were a long ways back,” Gundy said of WVU’s defense. “Not many opportunities during the game — that’s why you had 56 rushing attempts. If you try to challenge throwing the ball into a defense that’s setup like that, it’s going to be a long, long day.

“We have to run the football and be effective. It becomes more of an 80s and 70s style football game. There are 7.5 or 8 guys that are anywhere from 6 to 26 yards deep. There’s nowhere to throw it, but you have advantages running the ball.”

It seems that Big 12 teams have collectively decided, you know what, I’m tired of reading the 28 on the back of Washington’s jersey, if OSU beats us, it’s going to be on the ground.

That’s smart, too, because Oklahoma State’s offensive line is beat up and now its running backs are, too. The rest of the Big 12 is daring Oklahoma State to be as good on the ground as it is in the air and is wagering games on the fact that they aren’t. I would imagine Gundy loves this as he’d probably rather run it 65 times a game anyway, but it makes for a tough viewing experience because the run game is clearly not the well-oiled machine the passing game is.

Now it’s all hands on deck the rest of the year at tailback. Part of me thinks Hill getting dinged on Saturday was sort of a good thing for the long-term prospects of this offense. Get King adjusted to big boy football and swap them in and out the rest of the season. It’s clear the new 27 is as effective as the old 27 was last year (he’s averaging 5.1 yards per carry to Justice’s 5.5 last season).

It also makes me wonder if we might still see Chuba Hubbard at some point. That sounds silly 2/3 of the way through the season, but so did playing Mason Rudolph in the rain in Waco four years ago.

Oklahoma State averaged 4.4 yards per carry, which is not great, but it’s a far cry from the 2.9 they averaged at Texas one week ago. The problem for the upcoming Bedlam game? OU’s defense looks more like Texas’ than it does West Virginia’s. The Sooners are bad against the pass but pretty good against the run. That was Texas’ formula, and it padded its secondary to make up for deficiencies. In doing so, it gave other teams the plan for the rest of the season.

In other words, Oklahoma State won’t be able to mediocre its way to 50 points against OU like it did against West Virginia. And anything less than 50 might not get it done in a wild Bedlam game against Baker and Co.

I would imagine OU mimics the Texas-West Virginia game plan. They have more cats than WVU but fewer than Texas, but I would be stunned if Mike Stoops didn’t load up centerfield and invite Mike Yurcich into Ogbonnia Okoronkwo’s neighborhood up front. The Pokes are going to have their hands full, and Rudolph is going to have to be dang near perfect.