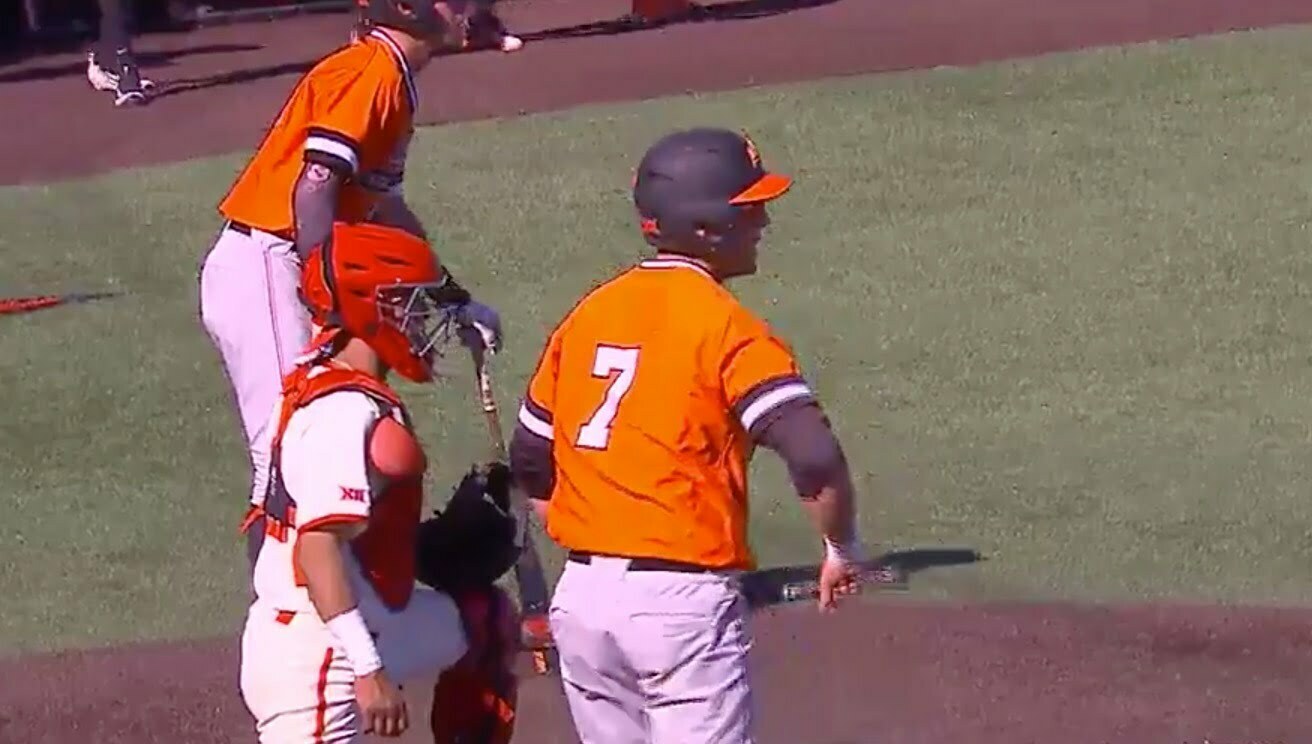 Had the Oklahoma State baseball team lost its road series as expected against No. 5 Texas Tech this past weekend, all hope for even a spot in the NCAA Tournament would have been lost.

But the Cowboys ripped out two wins, including an exciting 11-inning win. They probably know it, but that might have salvaged their season. OSU is now 23-16 and 6-9 in conference ball, which is enough for a tie with Baylor at seventh in the standings (as of 6:22 Sunday night).

They’re likely going to need someone to fall and to sweep at least one of the remaining series, but even with six wins in the Cowboys’ final nine Big 12 games, they could realistically move as high as fourth. OSU’s last three series are at home against Texas (sixth), at home again with Baylor (tied for seventh) and at neutral sites for Bedlam against the Sooners (fifth).

Not terribly tough, and at least newly named Big 12 Pitcher of the Week Carson Teel knows it. On winning the series in Lubbock, Teel said this postgame to OSU athletics:

“Oh my gosh. That was huge. That was something we can build on. We may go rattle off a lot right here. That just shows no matter what, our team endures.”

That’s true. Although the Cowboys have lost games to the likes of Grand Canyon, Central Arkansas and Texas State, there hasn’t been any hint that the group has quit on the season or felt it couldn’t match what the College World Series Cowboys did last year.

A series win on the road against the No. 4 team in the country is evidence of that, especially when the series is won in the 11th inning of the third game. Would have been awfully easy to roll over, particularly for a team that has lost in such spots.

“We’ve lost too many games that we won today like this,” third baseman Garrett Benge told OSU athletics. “So to win like that and to use the momentum, just like we had against ORU, and keep moving forward is huge for our team.”

It might be a little too late for any kind of redemption shot in terms of winning the conference, and that’s something that rationally must be an elephant in the locker room, but a decent showing in the conference tournament May 24-28 in Oklahoma City might spur something heading into the NCAA Tournament if they get there.

Last week, OSU was 62nd in RPI. After taking the Tech series, the Cowboys are 44th. There are 64 teams in the tournament, so if the season ended after the 11th inning Sunday, they would probably be in.

Allie P. Reynolds Stadium hasn’t rocked in (probably) one of its last few seasons as much as it has in many others, but the Cowboys now have new life (and 10 straight games at home) after winning the Tech series and taking advantage of what probably was their last chance at breathing.