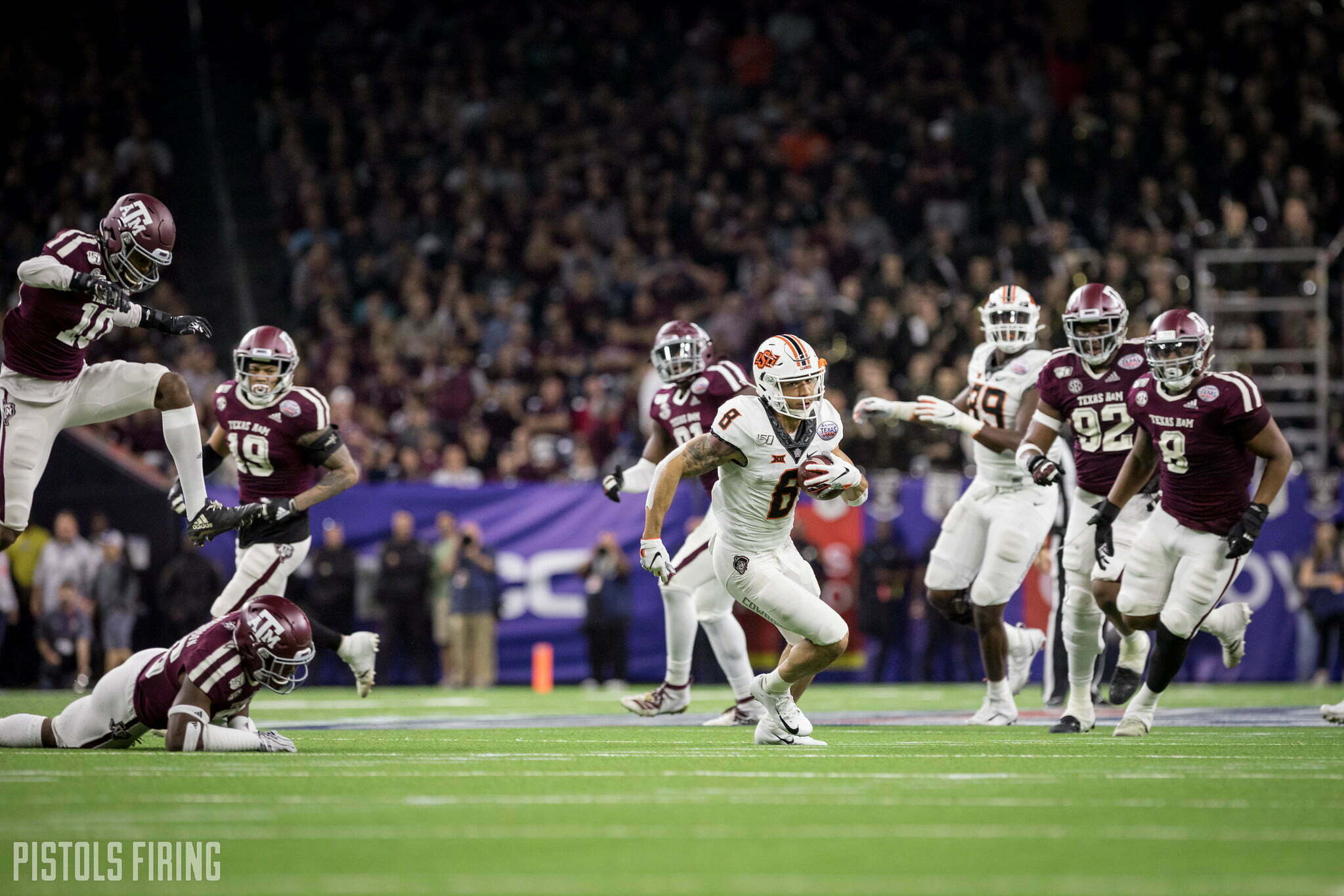 It feels like football just ended last week, but spring practice is actually just around the corner. Tylan Wallace won’t participate in a meaningful way, and Chuba Hubbard will be wrapped in all the bubble wrap OSU’s graduate assistants can round up in the city of Stillwater between now and then, but it will still be an intriguing time for these Pokes.

There will be questions and potentially even some answers as we hurtle into a Summer of Great Expectations for OSU. Here are a few of the queries I have ahead of Oklahoma State’s spring camp.

1. A.J. Green Replacement? The buzz has been that freshman Thomas Harper would slot in behind Green, and this spring would be the time for that to happen. However, he now has some competition in Mizzou transfer Christian Holmes. Other than Harper and Holmes, you’re looking at freshman Demarco Jones and redshirt freshman Gabe Lemons. Harper seemed like the default choice opposite Rodarius Williams before Holmes announced, which would be a big ask for somebody in their second year. Now, I suspect it will be Holmes. OSU didn’t lose a lot on defense, but what it lost was valuable (probably more valuable than people realize).

2. Can OSU keep this vibe into August? You know what I’ve noticed since Chuba announced? A more brash, swaggering program in Stillwater. You know where that has most come across? On social media. That’s not to say OSU is Instagramming and Facebooking GIFs of those 2000s Miami teams and saying they’re going to follow in the footsteps of Ed Reed and Sean Taylor (RIP). The shift has been subtle, but noticeable. Stuff like this.

Maybe that’s nothing. Maybe I’m overstating what I’m seeing, but it’s an aura that I don’t believe OSU has cloaked itself in recently. And while social media has about as much to do with on-field production in October as this post does, it’s more about how OSU wants itself to be perceived, which is a category it has lacked in in recent years. I’m curious if that’s a through line we see to the end of November or if it peters out as the months wear on.

3. QB2? For the first time since Mason Rudolph’s final lap in Stillwater, we won’t be subject to a QB derby, at least not for the top spot. However, the run for that No. 2 slot could get interesting. Will OSU make true freshman Shane Illingworth its de facto QB2, knowing it has four games of leeway to play with when it comes to a redshirt? Will Ethan Bullock win the job outright? Will somebody else emerge? Will the QB2 spot simply be “Chuba, go back there, yell, ‘hike!’ and run around once you get it”? I don’t know that we’ll have anything solid come April and May, but we’ll at least have a better idea of who the players are.

4. Glass by Glass? The only offensive questions are depth-related, and the biggest one is whether Rob Glass affected Deondrick Glass over the last year and turned his body into that of a real No. 2 guy. The rumors last year were all conditioning-related so it stands to reason that a season (and offseason) with the greater Glass could have helped make the transformation. We’ll know based on how he totes it in the spring, and it would be nice for OSU to have some options behind Chu going into August.

5. Is Calvin Bundage healthy? Remember him? Now think about last year’s second-half defense with a controlled version of him on it.

6. Will Collin Clay be eligible? From what I’ve heard he will be, and if he is then all of a sudden the middle of OSU’s defense — between him, Israel Antwine, Cam Murray and Jayden Jernigan — is a real strength where historically it hasn’t been. Regardless, I’m excited about this future, but it would be massive for OSU if he got a waiver to play starting this year.

7. Stay hot, Braydon Johnson? Am I crazy to think Braydon is going to be the No. 2 guy? The Tyron to Tylan’s James Washington? I get that Stoner and Wolf have been doing it for longer, but I also know what I watched at the end of the season. And what I watched at the end of the season was somebody who pounded an SEC defense all night in the Texas Bowl. He’s such a great piece to have on this offense that can go Chu-Chu-Chu-Chu-over the top to Braydon or Tylan and score faster than you can count. I’m intrigued to see how he’s featured this spring.

8. Who kicks? The depth chart tells me that Alex Hale (from Australia, of course) is next up after Matt Ammendola, but who knows how this is going to go. Kicking has to have the greatest variance between attention paid by us and actual on-field importance of any position in football. Having so many great ones over the years has spoiled us, and I hope we’re able to say the same thing one year from right now.