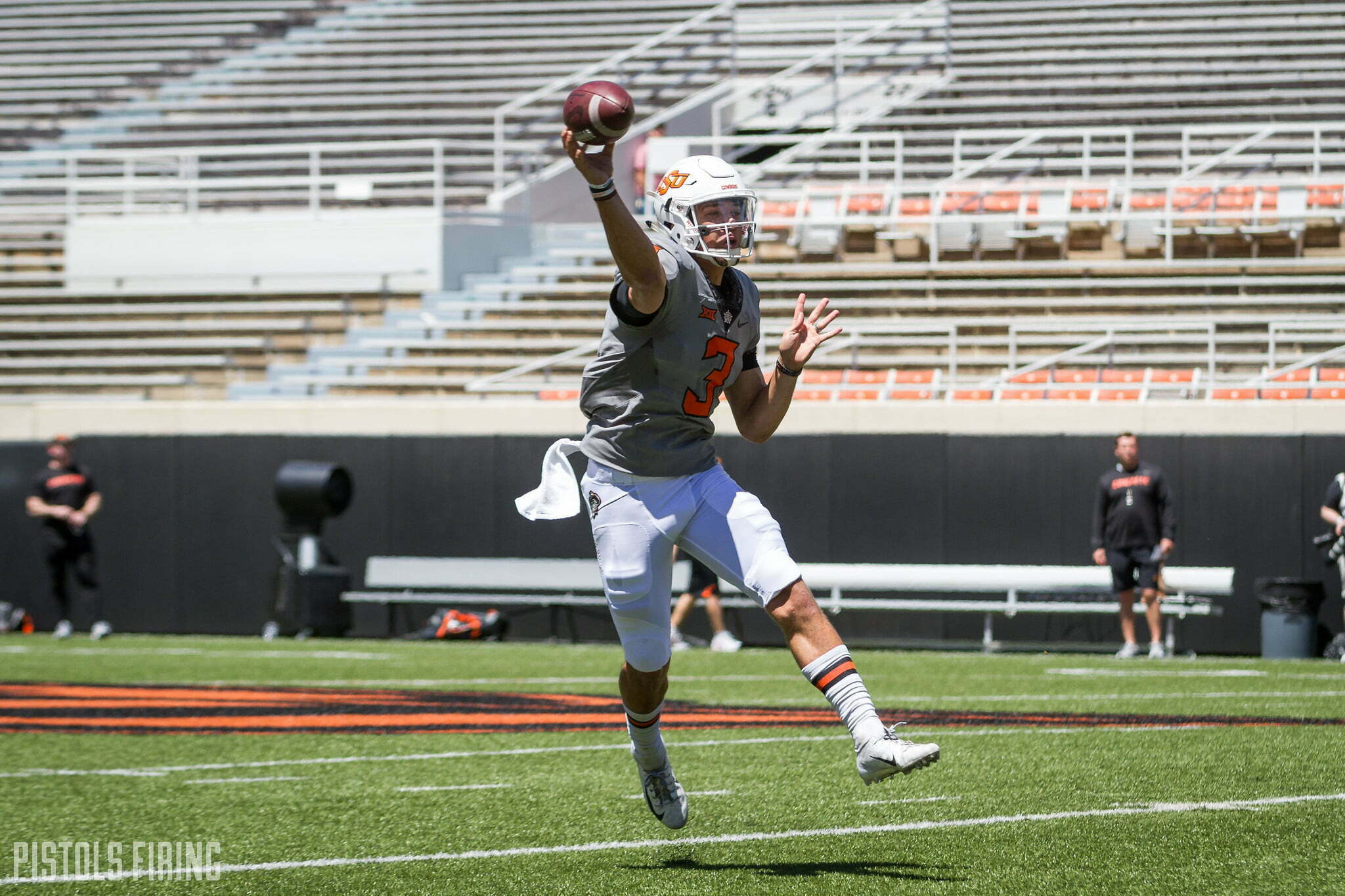 For those of you who just emerged from beneath a giant rock — or have mistakenly happened upon this blog in search of actual handguns in action — there is currently a tight QB race going on between Spencer Sanders and Dru Brown and a crucial bounceback season for Oklahoma State depends on it.

I don’t have any new information to share since Mike Gundy said this recently: “If you clearly have a player that’s better than the other, you play him. If not, you have to play both guys.” Translation: Neither Sanders nor Brown has proven himself to be clearly better to this point.

That got me thinking about the process itself. It’s not as simple as we might like to think it is and those making the decisions have much more to consider than high school highlight vids. I think that we (or at least I) take that process for granted yet are quick to cast stones at the committee when a story book ending doesn’t play out.

So I thought I would lay out some criteria by which a quarterback race can be judged based on what makes sense to me, the outsider lookin’ in.

I am not a football coach nor an expert on evaluating quarterbacks, so I will leave any grades for specific candidates out of it. One candidate has never played a snap of college football, anyway.

These will serve more as a fan’s guide to understanding what things might be considered, than a How To Guide for the people who know better than me. And it might also serve as a way to grade that incredibly difficult, yet crucial decision in the future.

So here they are: Eight things to consider before naming your starting QB.

1. Who Helps You Win Games?

While the order of this list is mostly inconsequential, it’s no coincidence that this criterion is at the top.

It seems simple enough, but it’s the paramount goal of the entire exercise. Most of the rest of this list ties into this notion, one way or another, but it has to be said. If you believe one guy makes the difference between 7-6 and 9-4, play him.

As an offense, you have a finite number of snaps and possessions even at Oklahoma State which averaged the ninth-most plays per game last year (79.2). So it stands to reason that accuracy, or using those limited amount of snaps wisely, is pretty important.

A lot can go into a QB’s completion percentage and scheme can make things easier. Easier throws to more open targets makes for a higher rate, but you have to have someone who can make those throws.

You want your starting QB to complete at least 60 percent of his passes. Last year the top 61 passers in the FBS resided above that mark. Elite-level quarterbacks live in the high 60s.

For reference, the most accurate OSU passers over a career are:

I included the number of games because, naturally, the more exposure, the greater chance for inaccuracy or regression.

This next bullet point goes hand-in-hand with the last one. The only thing worse than an incomplete pass is an interception. Gundy has been adamant about his QB1 limiting turnovers, and for good reason. It will be interesting to see if and how he reacts to an untimely INT from either candidate in the early goings. It’s something that can’t be ignored, but there has to be some allowance for error, especially if we’re talking Sanders in the beginning.

This one is something that we can’t add a ton of insight to when it comes to the candidates in question, but the coaches have a year’s worth of practice, etc. to go off of. But making the right read in practice ≠ a decision made on third-and-long, down 3 on the road.

Between Dru and Spencer, obviously the former wins this battle having two years of starting experience at Hawaii. It’s not the only thing to consider but it’s an important factor. 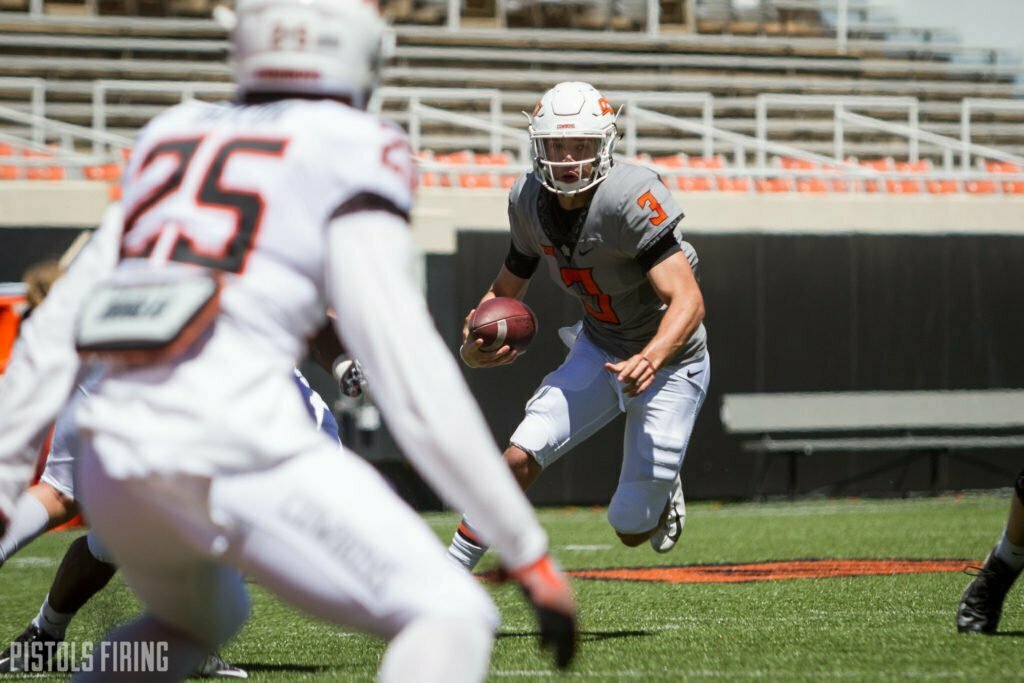 Of the potential starters, which one has the most upside as a playmaker? I think the obvious answer is the freshman who owns all the Texas Preps hardware one could hope to earn.

I was listening to Michael Doutey’s new podcast recently and he had the Tulsa World‘s Bill Haisten on. Bill always gets me unreasonably excited about this fall when he talks Spencer.

“As it’s been described to me, it’s undeniable that Spencer Sanders it the more gifted guy with the better arm and certainly is a dual-threat guy who can make plays. When he gets to the second level of the defense, Michael, he’s going to be hard to catch.”

Excuse me while I got watch Spencer Sanders highlights on YouTube.

This is an important factor in any QB decision. Mike Gundy was recently asked why a two-quarterback system is less common these days.

“Reps,” Gundy said. “You just don’t have enough reps to go around. … The only time we’ve ever done it is if we’re using a short-yardage guy, with the exception of Chelf and J.W. that one year because we didn’t have a clue who would be the best player.” [PFB]

Once you make your decision, said starter gets to benefit from more experience running the playbook in practice and with the first-string offense. It’s easy to see why Gundy, Gleeson & Co. would probably have preferred a more clear-cut race by this time in camp.

This is something that Kyle Porter has brought up numerous times but I think it bears repeating. Every quarterback faces a learning curve. If you believe Sanders can be your guy going forward, why not plan on him working through it this year and setting up an experienced sophomore season in 2020?

Gundy repeatedly brought up the QB learning curve of 15 games last season when talking about Taylor Cornelius. Why not let Sanders hit No. 15 against Tulsa next fall if he is at least comparable in projected win shares in 2019?

There are points to be made on both sides of this argument and the important thing to remember is that all of these factors have to be compared against each other and considered with a dash of nuance and a pinch of common sense. Even more important to remember is that the weight of the decision on a fan’s sensibilities pales in comparison to its impact on Mike Gundy and his staff.

For my money, I think know who I would pick, — and I reserve the right to critique the decision come November — but just working through this list reminds me how difficult a decision it is.