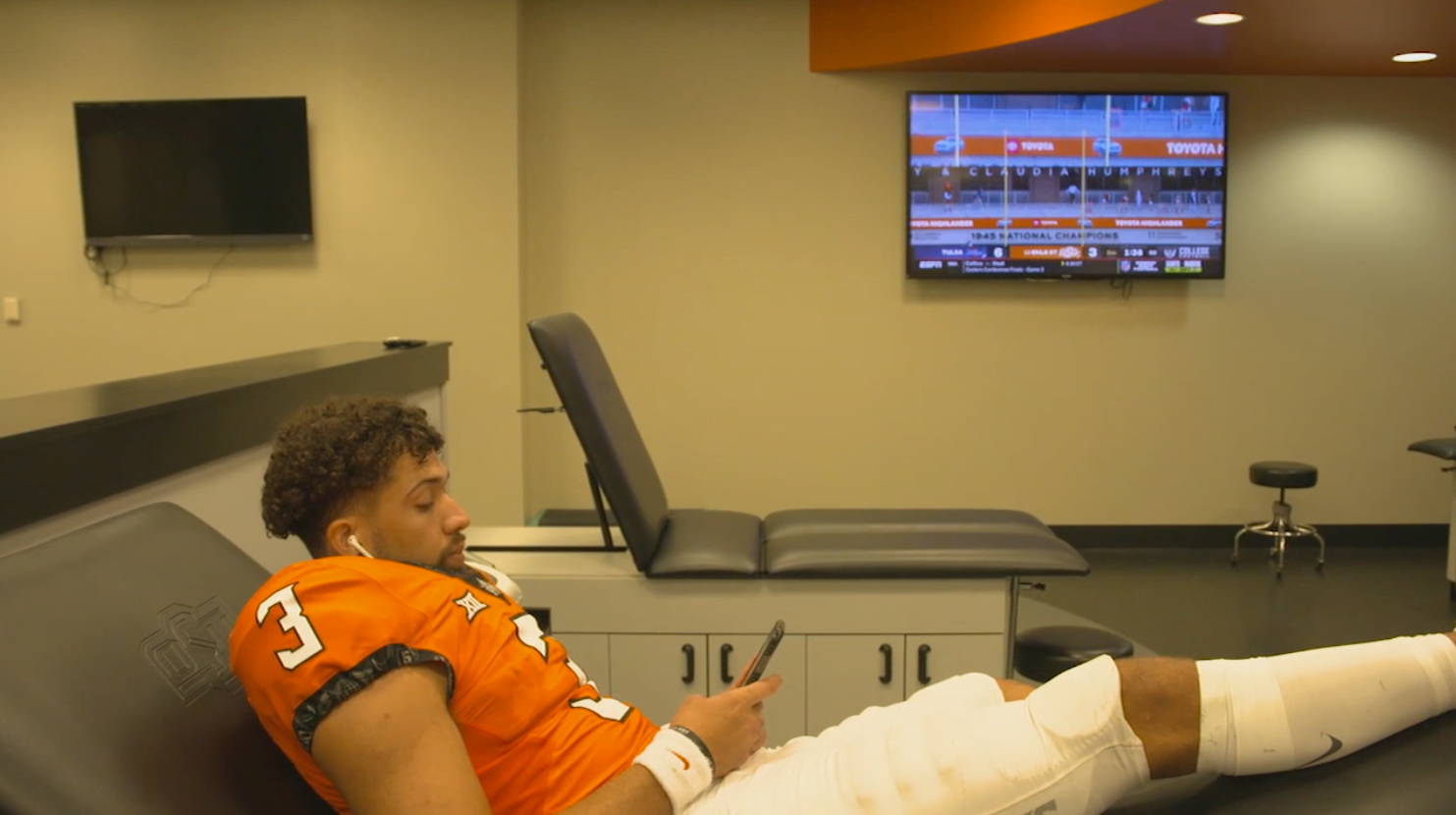 The seventh (!) episode of the ESPN+ documentary following Oklahoma State this season, entitled “Our Time: Oklahoma State Football,” aired on Thursday. The episode was one of the longest and most revelatory to date, spanning 24 minutes and showing behind-the-scenes footage ranging from Kasey Dunn’s house to the locker room.

Below are the highlights. (As always, spoilers ahead.)

• Pretty cool opening scene from Kasey Dunn’s (OSU’s offensive coordinator) back yard. He’s chilling out, maxing, relaxing all cool grilling out on a Thursday, a night he says Mike Gundy gives off as “family night.”

• The brains behind OSU’s COVID operations.

• This was cool (and something I didn’t know OSU did). Gundy talking with the players pregame hitting on game plan, bringing your own energy, taking what the opponent gives, etc. Gundy with some serious fire.

“Better bring your own energy,” he says. “Bring your energy, get your a** going.”

• “Seems like Sanders might be less than 100%,” says the ESPN announcer, with 5:13 left in the first quarter, after he goes down with apparent ankle. Sanders adds on the sideline after the series: “[Inaudible yelling! Inaudible yelling!] My foot was just planted!” They tape his ankle and he returns, but he lasts one series before heading to the locker room.

• That halftime was absolutely fierce. Some serious intensity. Jim Knowles firm with his defense but not ferocious, urging them to apply pressure to the quarterback. Gundy with a little chat with his offensive line unit talking schemes. Chuba Hubbard with a little pep talk, too. But then Josh Sills just lets it rip.

• Ethan Bullock makes his first ESPN+ appearance. First pass they show: INT! They then show him on the sideline favoring a shoulder.

• This was a pretty incredible scene. Gundy on the sideline goes, “Do you have to put 16 [Shane Illingworth] in? I gotta put 16 in, that’s my opinion. I’d do it right now. That’s just me.” As easy as it is for fans to switch QBs, kinda cool to see a head coach wrestling with that decision in-game.

• As soon as Illingworth completes his first pass attempt, they pan to the locker room where Sanders stands up, eyes on the screen, and yells, “TALK YO S***!” He loves it. I love it. He’s so pumped to see his man firing darts.

• Not a good sign here as you scan the training room. On the left, that’s offensive lineman Hunter Anthony. On the right, Cole Birmingham. Two key cogs OSU needs; Anthony with crutches and a boot and Birmingham with a lower leg ailment as well, appears to be left ankle/foot. Gotta hope it’s not serious for any of these three.

• Crazy little nugget from this: Kasey Dunn notes that Shane Illingworth didn’t even stay in the team hotel — which 99% of players who are actually playing or expected to play in the game — normally do. So there was virtually no expectation he’d play, and he played exceedingly well.

• BRB gonna go weep at the emotional, “Baby boy!” from momma Illingworth here. What a moment.

• From Shane’s dad: Shane quarantined for two weeks before the game and had one practice before Saturday (but according to him, he thought he had won the QB2 gig over Bullock).