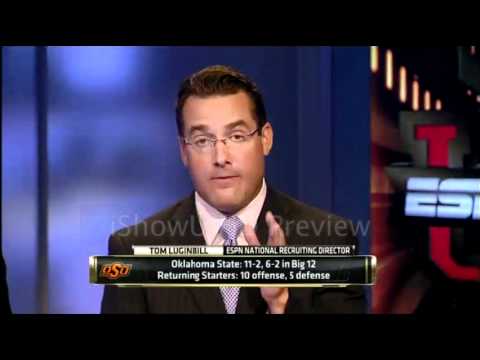 Again, sorry about the “ishowU HD Preview” watermark, I’m testing out some software for the season to see what I like and don’t like. I like this so far.

I encourage you to watch the video. It’s an informed, quality discussion of what OSU has on the table for 2011…even if they do lead with a Monken/Holgorsen question.

I haven’t seen a ton of Danny Kanell but what I have seen so far I really like. I think he’s humble, he provides good insight without dropping Nick Faldo-esque “back when I played” statements, and he nonchalantly mentioned that he thinks OSU can play for the national title. He’s basically the inverse of Jesse Palmer!

Luginbill (who’s like the ESPNU version of Steve Lavin) makes a great point of not only how unsuccessful the defensive line has been but how relatively small it is. Only one dude over 280, I’m glad they play in the air-it-out Big 12 because that would get rolled over in the Big 10 or SEC.

I’m not real sure about this Lowell Galindo host by the way. He’s moving over to be the head guy at the Longhorn Network (enjoy the firestorm!) and proceeds to bungle Richetti Jones’ name. He seems a little too cool for school to me.

All in all a pretty solid breakdown of what could be the greatest team in school history.