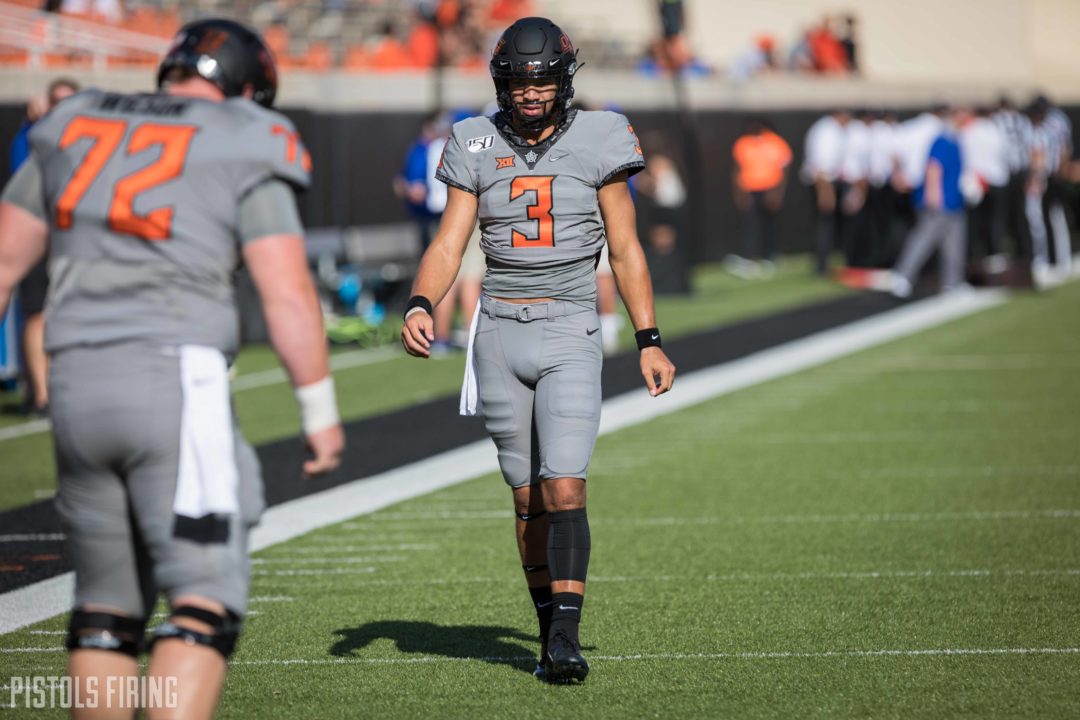 The Cowboys are coming off a 56-14 victory over McNeese this past Saturday. Normally, there’s not a lot to take away from an offensive perspective against an FCS opponent. However, there is one thing I wanted to key in on for this week’s film review — the quarterback running game.

Heading into last week’s home opener, the thought of OSU offensive coordinator Sean Gleeson dialing up some designed QB runs for redshirt freshman Spencer Sanders was not something I expected. This is definitely something I thought Gleeson would utilize as the Pokes make their way through the Big 12 schedule, but showing this part of the playbook against an FCS opponent was a little surprising. That being said, let’s dive into the quarterback running game, not just the designed runs, and what we saw in this past weekend’s home victory.

The first play I wanted to point out is this zone read concept we saw early on in Saturday’s game. This isn’t designed quarterback run, but I wanted to highlight it as we’ve seen a variation of it several times already this season.

Oklahoma State shows two receivers to the bottom of the screen and one to the top. Before the snap, inside receiver Dillon Stoner goes in motion like he is going to take a jet sweep. The offensive line zone blocks to the sweep side, which is also the side of the formation running back Chuba Hubbard is headed. Cowboy Back Logan Carter heads the opposite way and will arc block for Sanders as he reads the defensive end flowing towards the sweep/Hubbard, and pulls the ball away from Hubbard on the keep.

We’ve seen something remotely similar out of the Kyler Murray/Lincoln Riley-led OU offenses, as shown below, only here the sweep man is performing the arc block as opposed to the Cowboy Back and the line is blocking GT counter as opposed to zone.

Up next is a play we talked about last week, the Buck Sweep (shown below).

Only this time, instead of Hubbard running behind the two pulling guards, it’s a designed run for Sanders. As you’ll see in the following clip, the Pokes come out in a very similar formation, with a Trips receiver set to one side of the field. But this time, Sanders motions Hubbard out of the backfield as a single receiver to the bottom of the screen. This spreads the defense out and opens up some running room for Sanders. He then takes the snap as both the left and right guards pull and open up a running lane for the young QB.

A little later in the second quarter, we see a similar play, only this time the playside guard and center pull instead of both guards.

This one looks a lot like something Gleeson used to dial up for his Princeton Tiger offense, as you will see in the following video.

In addition to these plays shown above, we also saw Gleeson call a couple of quarterback draws, which I’m sure we will see plenty of this season.

I’m not opposed to utilizing the QB running game when you have a dynamic athlete like Sanders at the position, although I might have relied on it at little less against McNeese. The young signal caller gained 62 yards rushing (lost 11 on a sack) on 11 attempts (12 counting the sack) and was the Cowboys’ leading rusher Saturday night.

I think this is going to continue to be a huge part of the OSU offense this season, and if Sanders can hold up throughout the year, he’ll rack up a bunch of yards on the ground.