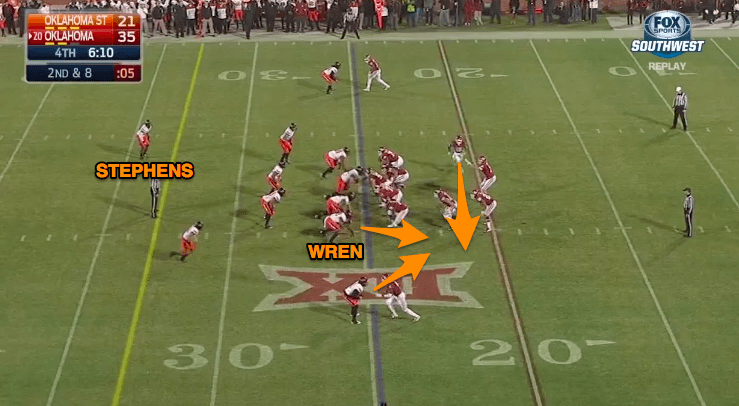 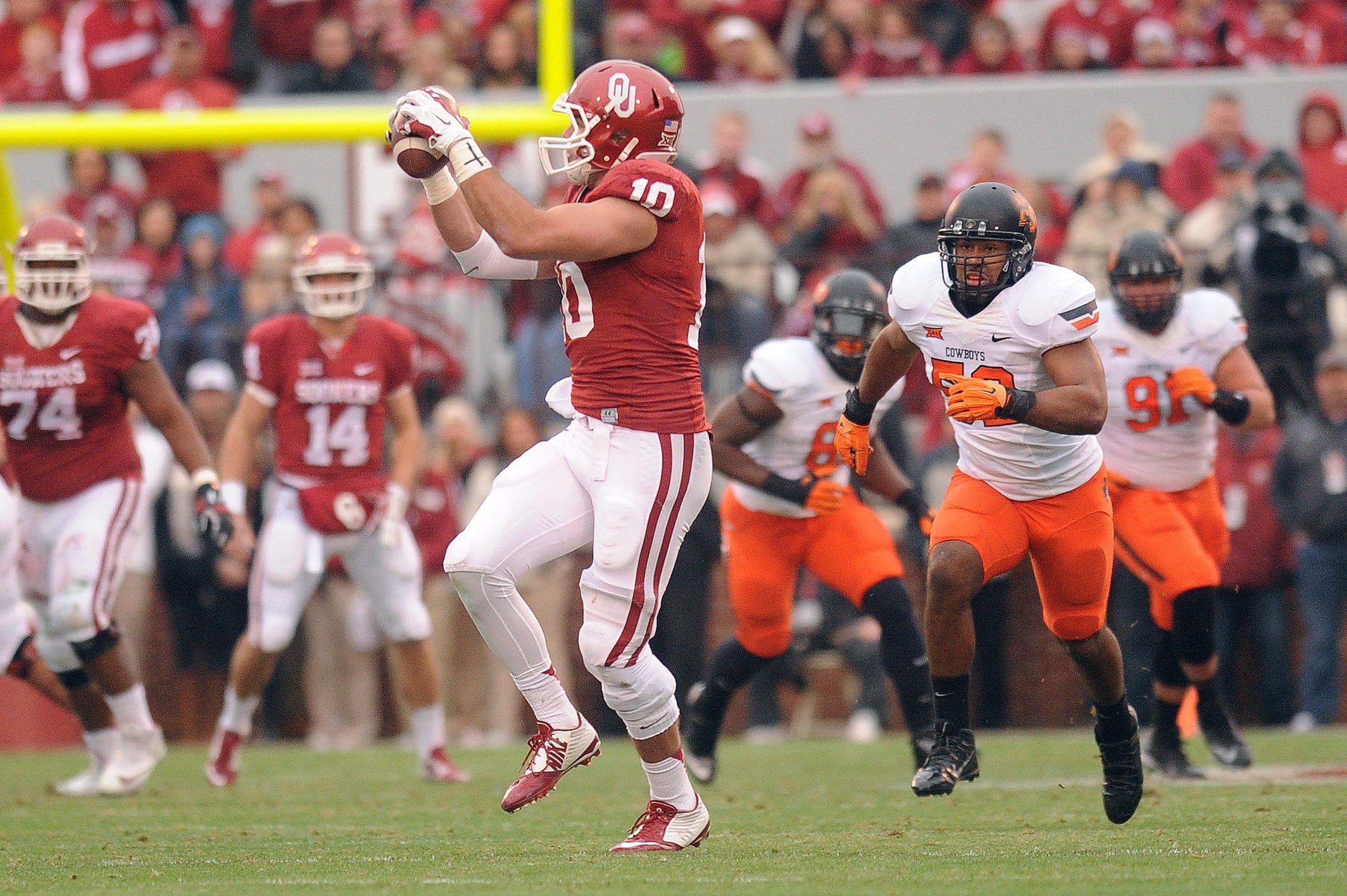 Ed. note: I asked Braden to break down the three and out on OU’s third-to-last drive before the drive where they only had a seven point lead as well as the drive that led to the punt return.

Here are those three plays…

OU started the drive on its own 23-yard line. Everyone in the stadium knew the Sooners would run the ball to try to take as much time off the clock as possible and with the way OU had been running it all game I was wondering if we would even have a chance to get the ball back.

OU lines up in a pistol formation with running back Alex Ross lined up behind quarterback Cody Thomas. To the left of Thomas is fullback Aaron Ripkowski. There’s a wide receiver at the top of the screen (weak side) and two receivers lined up on the strong side.

OSU is in a 3-4 defense with two outside linebackers (Jacobs and Wren) playing on the line of scrimmage and a safety (Stephens) rolled down on the line, too. 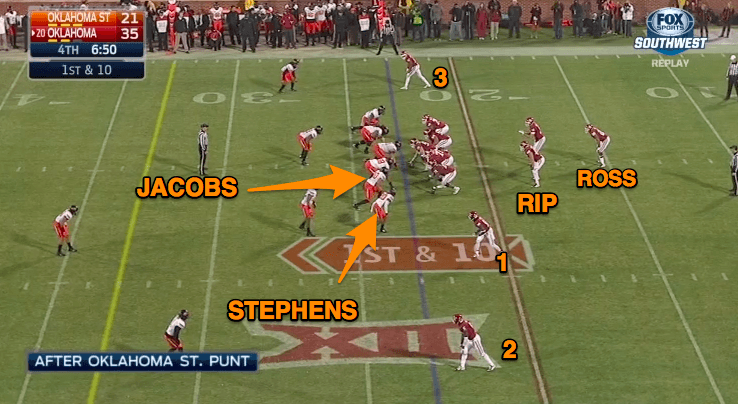 In OSU’s base 4-3 defense, Wren plays a defensive end, but in the 3-4, his unique combination of size and speed fits the mold for a 3-4 outside backer.

The Pokes have eight defenders stacked in the box to stop the run, with Jordan Sterns playing deep safety 17 yards off the line of scrimmage and the corners playing off their receivers.

The ball is snapped and, to no one’s surprise, Thomas hands off to Ross. Ross follows Ripkowski’s blocking to the left side of the field but is tripped up by Ryan Simmons for a 2-yard gain. 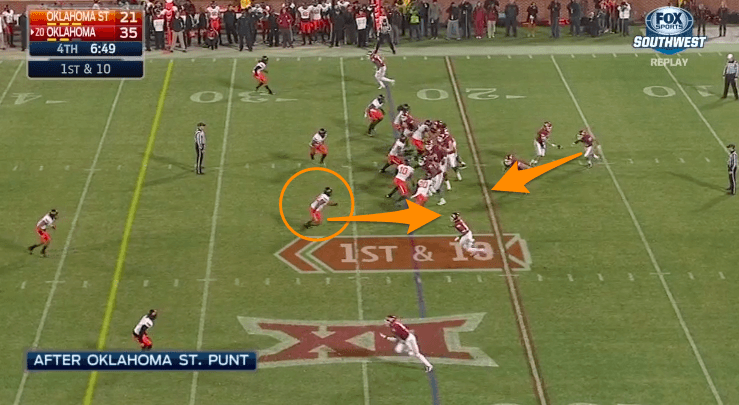 OSU is in a numbers advantage on this play because OU only has 6 guys to block 8 OSU defenders in the box. The OU guard blocks Jacobs, the tackle heads for Phillips and Ripkowski blocks Stephens.

With no OU blocker left on the play side, Simmons is able to remain unblocked to make the tackle.

OU lines up in the shotgun. Ross is to the left of Thomas and Ripkowski is directly in front of Ross. There’s one WR at the bottom of the screen and two up top.

This time OSU is back in the 4-3 defense with Wren playing right end and Stephen back in his FS spot.

Right before the ball is snapped, the inside receiver up top goes in motion. The ball is then snapped and Thomas hands it off to the WR, who then takes it and follows blockers to the outside corner.

This play is a jet sweep and it’s one we’ve all seen thousands of times. When executed properly, it can be a very dangerous play.

The jet sweep relies on getting one of the team’s best athletes the ball on the outside in space, where he can use his speed and athleticism to make defenders miss. But before he can do that, his blockers need to do their job.

Just like the last play, missed blocking costs OU. OU leaves two men unblocked and those two players go on to make the stop. This time it’s Peterson and Wren.

OU had men assigned to block both player, they just didn’t get there in time. Notice the pulling right guard on the play. He immediately goes straight for Wren and continues chasing after him even after Wren turns away and chases after the WR. 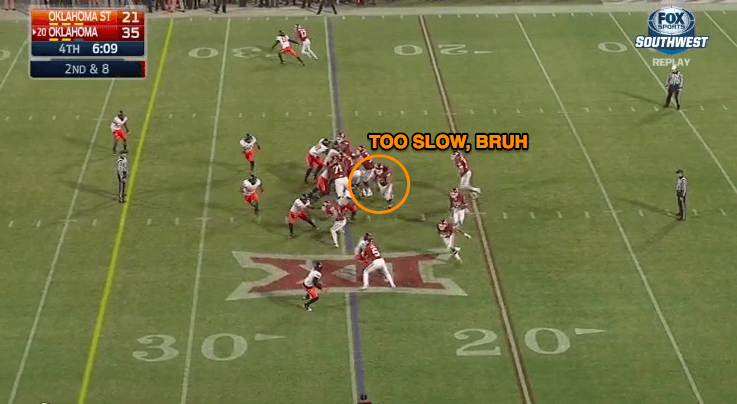 The WR lined up on Peterson gives Peterson a quick shot off the line of scrimmage before he crashes down on Sterns.

Ripkowski takes off right when the ball is snapped and goes to block WLB Justin Phillips. That leaves Ross left to block for the Sooners on the play side, and one can assume he was meant to block Peterson. 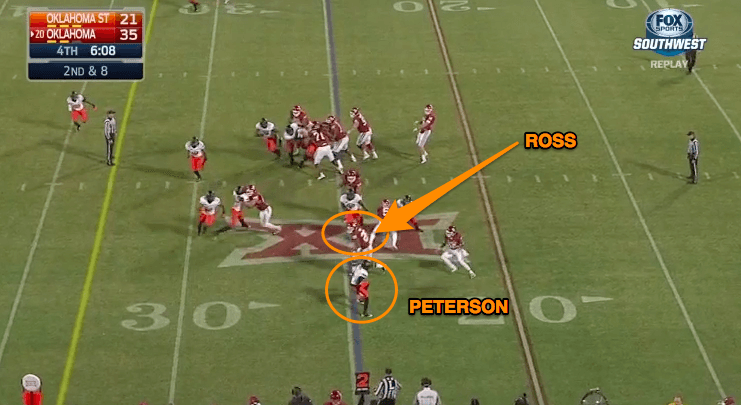 I’m not sure if Ross got his assignment mixed up, or if he just didn’t see/get to Peterson fast enough, but Peterson is able to play contain while being unblocked and prevent the ball carrier from turning upfield.

OU is lines up in the shotgun. Keith Ford is in at RB. In an effort to spread the defense out, OU has four wide receivers in on the play—three up top strong side, one at the bottom.

OSU lines up in the 4-3 again, with Jacobs bumped out lining up on inside receiver Blake Bell. 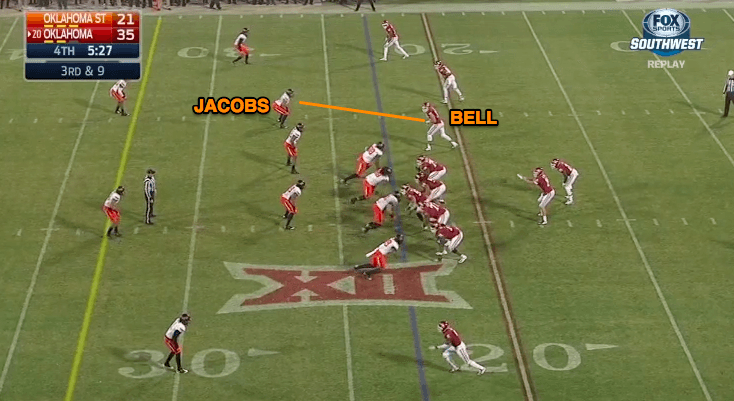 The ball is snapped and Thomas hands off to Ford, who runs toward the 3-hole (the lane between the LG and LT). He only makes it a yard or two before Wren tackles him.

Another poor job of blocking allows Wren to make the tackle. This time, at least, OU actually got a finger on the man who ended up making the tackle. 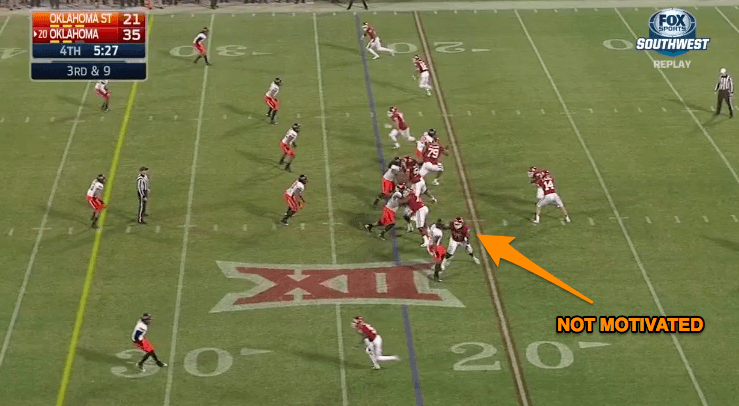 Wren gives the LT a little side step to the right before blowing past him to the left to make the tackle. And I love how the LT gives a little “ahh, man!” motion after the play.

This defensive stop turned out to be one of the biggest (maybe the biggest) of the game.

Sure, it was obvious OU would run the ball on this drive, so you might be think “how hard could it be to stop the run when you know it’s coming”? But the thing is, we knew OU would run the ball coming into the game and, up until this point in the game, OSU hadn’t done a good job of stopping it.

For the players to go out there for that possession down 14 and bow their necks to cause a three-and-out is huge.

I know Perine was out and OU had Thomas (who is probably the worst QB to start for OU in some time) taking snaps at QB, but OU still had two freakish RBss, the biggest offensive line in college football and a 14-point lead to rely on to finish this game out, and they couldn’t do it.

For the past two months, OSU fans haven’t had a whole lot of positives to take away from games. From a defensive standpoint, we all knew that youth and inexperience was the cause of poor play and we knew would just have to ride out 2014 until next season got here and we could start fresh.

But the defense’s second half performance in Bedlam brought back a spark of excitement we haven’t felt since the FSU game. And how reassuring is something like this moving forward?

Next year, this defense will be bigger, stronger, faster, older and more experienced. They’ll be leaps and bounds better.

But should they find themselves in trouble, they just have to remember that overcast day in Norman when they went in as 20-point underdogs and bent under a powerful rushing attack, but refused to break.