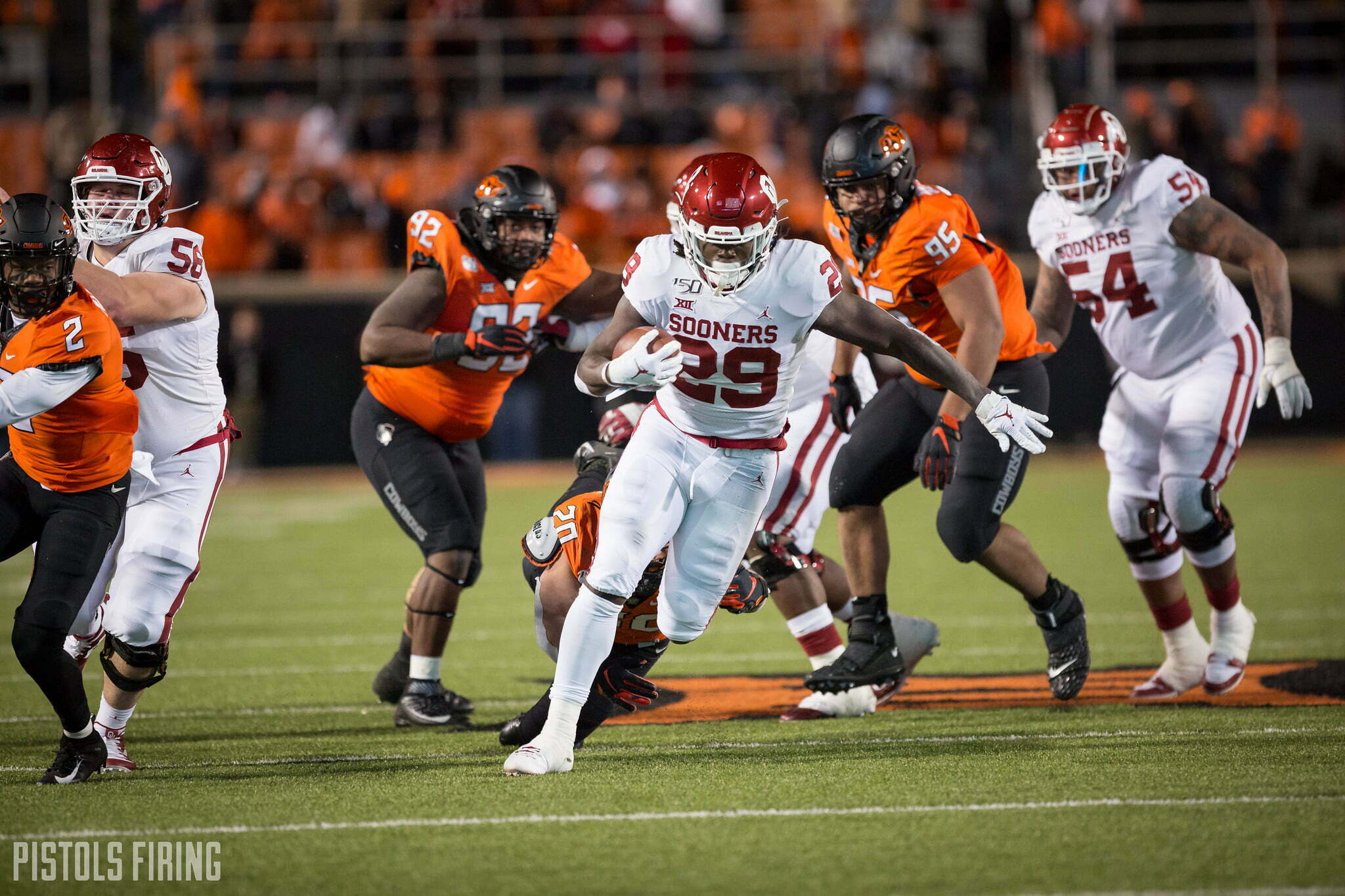 Oklahoma comes into this Saturday’s Bedlam matchup with the top ranked passing offense in the Big 12. Quarterback Spencer Rattler and his talented group of H-backs and wide receivers have had some impressive showings through the air this season. However, the part of the OU offense that I wanted to discuss today is the Sooners’ rushing attack.

After averaging just 122.0 yards on the ground through their first two conference games, the Sooners are averaging 196.8 yards per game through their last four contests. Now, part of that is attributed to two of those four games being against the worst rushing defenses in the Big 12, Kansas and Texas Tech, but the rest of that can be allocated to better offensive line play, the return of running back Rhamondre Stevenson, and the offensive players and coaches sticking to what has made OU successful in the Lincoln Riley era.

And, what is that? The “counter” run play. Specifically for OU, they like to run different variations of “counter trey.”

The counter trey is a running play that perfectly combines deception and physicality. The down blocks on the playside move downhill and hit hard, while a fake in the backfield freezes the defense enough to allow two pulling linemen to charge the playside to wipe out the defensive front for the runner.

As I mentioned above, counter has been a staple of the Sooner offense since Lincoln Riley started calling plays. According to Noah Riley, author of Breaking Down the 2018 Oklahoma Offense, Oklahoma gained 47% of their total rushing yards in 2018 on counter runs. Noah Riley also points out that OU runs over 100 different variations of counter. This allows the Sooners to still catch the defense off guard, even though they are technically running the same play repeatedly.

Their favorite type of counter play to run is GT, or guard tackle, counter. On GT counter, the backside guard and tackle both pull to lead block for the running back. The guard kicks out on the first defender he sees, and the tackle leads through the hole looking to block a defender at the second level.

In the first example below, you’ll see OU running GT counter out of a 12 personnel (one running back and two H-back/tight ends). The two H-backs are lined up to the field, or the wide side, with two receivers into the boundary, or the short side. See the diagram and video below.

As you can see above, the Sooners get their pulling left guard blocking Texas Tech defensive back Zach McPhearson out in space, which is not usually going to go well for the smaller defensive player.

Against Texas, OU flipped the formation. They had the two H-backs into the boundary and the two receivers to the field. As you will see below, this play resulted in a red-zone touchdown for Oklahoma.

The Sooners also will add in “fly” motion from a receiver to their GT counter runs to keep the defense on their toes. And, sometimes they will give it to the motion man, as he runs to the opposite side the pulling linemen are moving.

Another wrinkle OU will add to GT counter is a QB keep option, shown below.

Additionally, the Sooners will use the GT counter blocking scheme in their play action passing game.

Lastly, OU will run H-counter, where the H-back takes the spot of the tackle and lead blocks through the whole for the ball carries.

The Sooners have found success against the Cowboy defense with GT counter during the Riley, as you’ll see one example of in the following clip, and I’m sure they will go back to it again on Saturday.