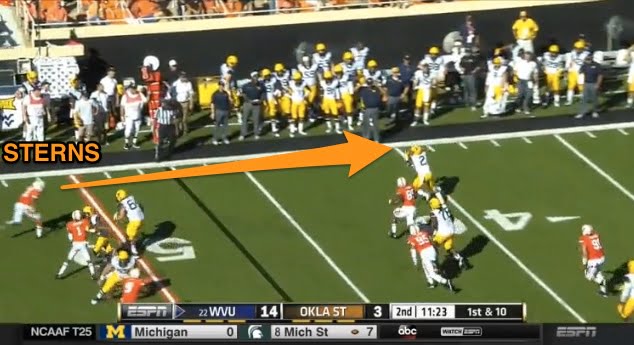 West Virginia is in a shotgun formation with a halfback on either side of the QB and three wide receivers split out wide – two WRs at the bottom of the screen and one up top by WVU’s sideline (the weak side of the field). 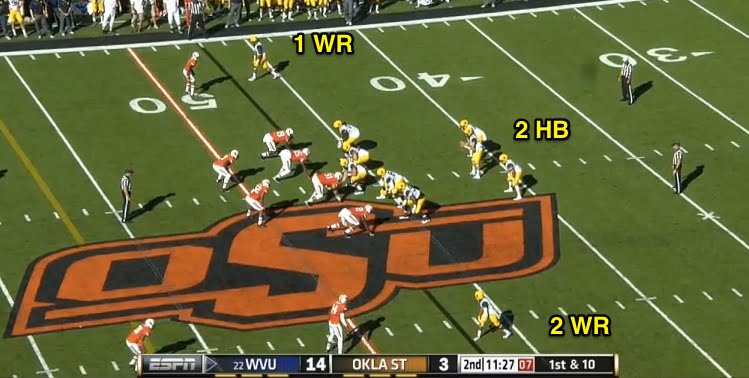 WVU runs a HB screen pass to the weak side of the field. In a HB screen play, the offense wants to get the HB out in the flat with blockers leading the way.

This play can be very effective because you’re getting one of your best athletes the ball out in space with big lineman leading the way blocking linebackers, and receivers blocking corners.

If a safety comes up to tackle the HB, you hope the HB can use his athleticism to evade the tackle, but even if he gets tackled, you’ve already picked up a solid amount of yards.

The key to stopping a screen pass is recognizing it from the moment the ball is snapped and reacting right away. The defensive linemen need to fight the temptation of going after the QB and pursue the HB.

The linebackers need to evade the lineman coming out to block and get out to the flat as quickly as possible. The corners need to have an eye on the backfield to make sure the offense isn’t selling pass and doing a run or screen instead.

And the safeties need to fly to the football as fast as possible before the HB can get headed up field with a full head of steam.

OSU’s defensive personnel do a pretty good job at doing all of these things on this play.

The two defensive linemen (Wren and Leveni) closest to the where the screen pass was run do a great job at playing contain until the ball is passed to the HB, and then chasing after the HB. 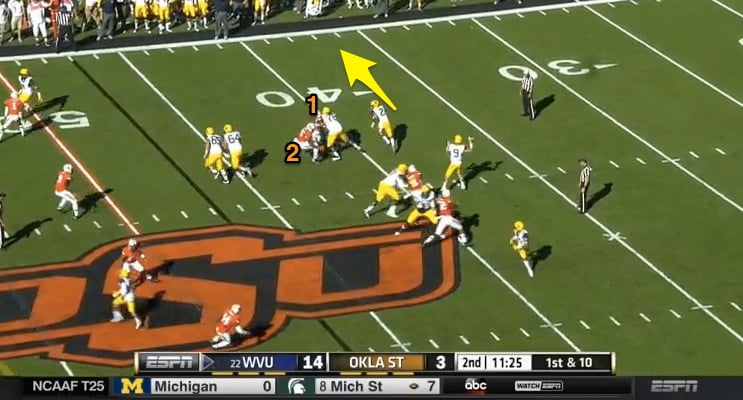 The linebackers get flushed out of the play when they think it’s a pass play, but this doesn’t matter much because Wren and Sterns have already tackled the HB by the time the other defenders starting getting around the play.

It’s plays like this that really highlight the type of players a defense has. Speed is such a valuable thing for a defense to have and this defense has lots of it. Just look at the closing speed Wren has coming off the block.

That’s scary to have a guy that big move that fast and corral a top offensive threat on one of the best offenses in football. And it’s not just Wren. As we’ve already seen, Ogbah and Bean are more than capable and overpowering blocks and chasing down ball carriers before they are able to even get past the line of scrimmage.

That’s where Sterns comes in. All season long, Sterns has shown up around the ball all game long. He’ll come at you fast and when he gets to you, he’ll lay a punishing hit on you. 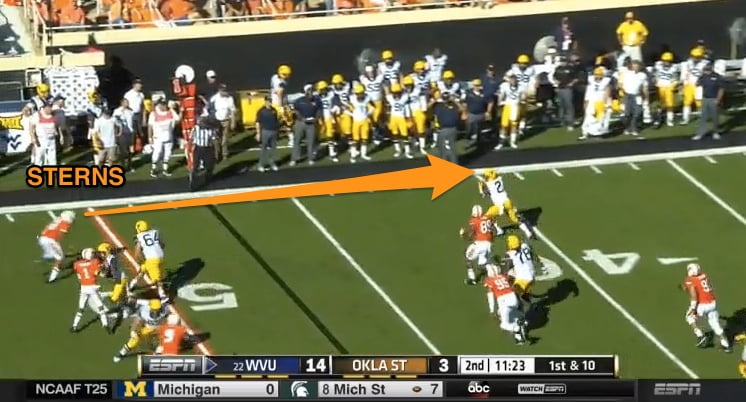 If you want to see the makeup of a defense, one of the ways is to see how it plays the screen pass.

Of course, a defense isn’t defined by how it defends one play, but think about it: it’s almost unfair when Alabama runs this play against the likes of Colorado State, but how much success is CSU going to have against the Bama defense running screen plays. The defense needs knowledge to know where the play is going, speed to get there and physicality to handle the blockers and bring down the ball carrier.

Not a whole lot of teams are faster than OSU. If this team gives up a big play, chalk it up to inexperience and missed assignment. But the good thing is, these things are fixed usually fixed with time as players get more reps in games.