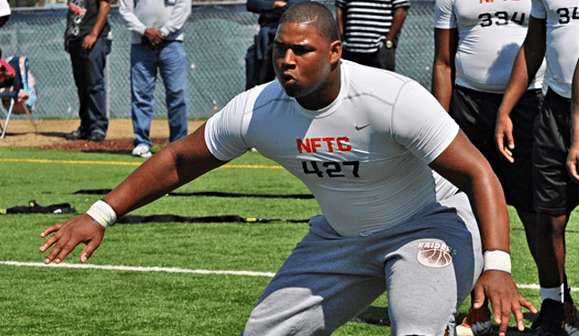 Tim Settle is one of the top 20 recruits in the country (via Varsitypreps.com)

With Glenn Spencer as defensive coordinator, Oklahoma State has found an undeniable defensive identity. Developing that identity has drawn many highly touted defensive recruits, and this weekend was no exception.

5-star defensive tackle prospect Tim Settle made a long trip to Stillwater for an official visit this weekend. Settle is from Manassas, Virginia, and this weekend was his second trip to Stillwater. Settle’s first visit to OSU resulted in a scholarship offer.
http://instagram.com/p/tyKwRzNGMy/

He would be OSU’s biggest player right now

The 2015 recruit is listed at 6’3, and weighs 362 pounds. Oklahoma State currently has ZERO players bigger than 356 pounds on its active roster. The big man is only a senior in high school, so it’s safe to say he’s not a guy you want to tussle with.

The defensive tackle is rated as the 15th best player in the nation according to the ESPN300 rankings.

The Cowboys have landed some big recruits throughout the years, but Settle would absolutely take the cake (or maybe he did) as the highest rated player to come through Stillwater.

Trying to beat out the Virginia schools

Settle has only scheduled 3 official visits so far; making visits to Virginia Tech and West Virginia as well. Oklahoma State is right in the mix, and the defensive tackle would more than likely be an instant contributor his freshman year.

The big man has a pretty impressive highlight video as well. Check it out: