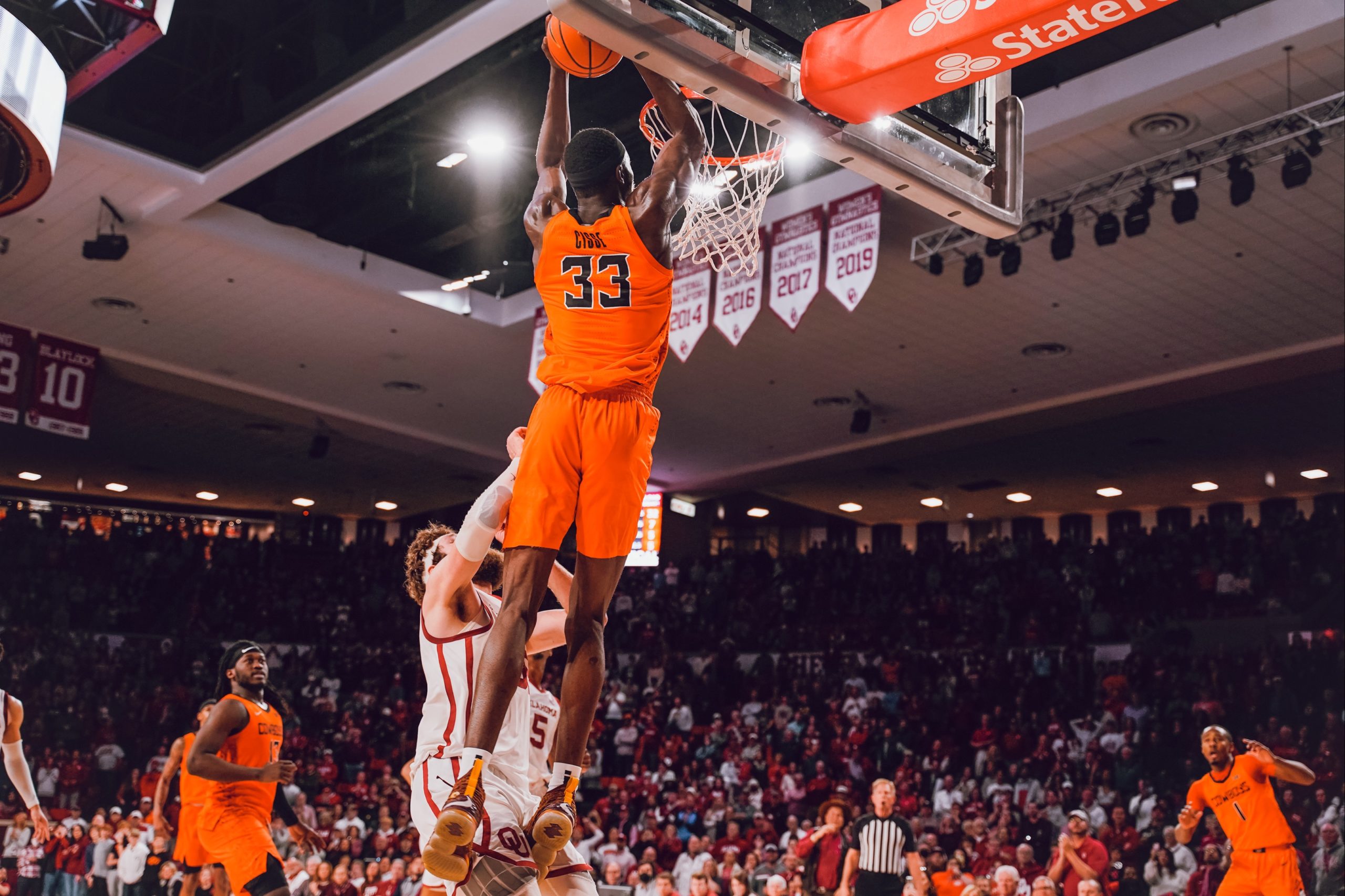 NORMAN — Basketball is an artform, but Saturday’s game won’t be hanging in a museum any time soon.

Oklahoma State fell to Oklahoma 66-62 in overtime Saturday in Lloyd Noble Center. Here are five thoughts on the game.

OU’s game-winning points came off a foul about 94 feet from the Sooners’ basket. That almost perfectly encapsulates this game.

Moussa Cisse was whistled for an over-the-back foul on Tanner Groves near the OSU basket, sending Groves to the foul line in OT with the game tied. That wasn’t the only perplexing play of Bedlam Round 2, though.

How about when Jalen Hill bobbled a ball he was trying to throw inbounds resulting in an OU turnover just for Bryce Thompson to throw the inbound pass right back to OU?

Then at the end of OT, Avery Anderson nearly recreated Thompson’s turnover with the Cowboys down two with 19 seconds to play.

It felt like OSU should’ve been down by 30, but they hung about 10 points behind for most of the second half. The Cowboys shot 38% from the field and had 16 turnovers. The Cowboys haven’t shot a lower percentage since their 56-51 loss in Austin on Jan. 22.

The Cowboys scored just 19 points in the first half, making the 35 they scored in the second half seem like a Golden State game.

It wasn’t easy on the eyes, that’s for sure.

Moussa Cisse was late for the bus down to Norman, resulting in him coming off the bench for the first time since Jan. 4.

But when he did get on the floor, Cisse showed the continued growth as a player he has gone through this season. He recorded his third double-double in the past five games, scoring 12 points to go with 10 rebounds. He also had a trio of stuffs.

The most telling stat of how good Cisse was is that he was +13 in a game his team lost. That means during the 22 minutes Cisse was on the floor (before his unceremonious foul out), OSU outscored OU by 13 points.

For fans looking for growth throughout the season, look no further than Cisse. In his first 22 games as a Cowboy, Cisse had two double-digit rebound games. He has had four such games in OSU’s past five.

He has been more aggressive on the glass and in the post. He’s always been a lob threat, but his pick-and-roll game has improved. He has also improved with his back to the basket. He’s progressing past just a 7-footer with a 7-6 wingspan.

And who the heck ties a game in the final 10 seconds of regulation with a ferocious lob jam?

“I think he’s earned the respect of his teammates because of the way he works and the way he allows us to coach him,” Boynton said. “That kid’s got a bright future if he continues to be about the right things and allow himself to be coached. The thing I keep pointing to, he’s just 19 years old. His best basketball is certainly in front of him. Guys like that have a chance to play this game for a long time and make a nice living doing it.”

3. The Mysterious Case of Keylan Boone

Keylan Boone scored 10 points on the Sooners in Stillwater. He didn’t play in Norman.

Boone hasn’t played since since the Cowboys’ Valentine’s Day tilt in Lawrence. Boynton has said Woody Newton, a similar-styled player to Boone, had earned the minutes over him. Here is what Boynton said after Saturday’s game when asked what Boone has to do to get back on the floor.

“Just work harder, be better, do the right things every day on and off the court,” Boynton said. “When you do that, you get rewarded in this program. When you don’t, you don’t.”

Newton had a good start to his time filling in for Boone, scoring nine points in OSU’s win against Kansas State. In the past two games, though, Newton has scored no points in 19 minutes on the floor.

Boone trails only Anderson in 3-point percentage this season among Cowboys who have put up at least 10 3s.

Anderson has had a couple of rough patches this season, but he has finished strong.

With his 25-point performance in Norman, Anderson is averaging 17 points a game across OSU’s past six. His 25 points against OU didn’t seem like that big a deal because this is kind of what people expected of Anderson entering the season.

He was the only guard who was able to get going for more than a shot or two Saturday, going 7-for-15 from the field and 3-for-5 from 3-point range. He also made all eight of his foul shots and had six rebounds. Aside from Anderson, the Cowboys were 2-for-10 from deep.

His late throwaway was ugly, but the Pokes aren’t in it without his scoring.

5. It’s Been a Weird Season

Ever since the NCAA upheld its postseason ban against Oklahoma State, this thing has been strange.

From the Cowboys beating the bricks off UT-Arlington to start the season to a dumbfounding loss against Oakland all the way to back-to-back-to-back overtime games, nothing about this has felt normal.

How much of it can you put on the fact that OSU has nothing to play for apart from pride? That’s kind of the million-dollar question. Would things have been different if the Cowboys, like the Sooners, were fighting to earn a spot in the NCAA Tournament?

The Pokes are still playing hard, evident by the fact that they’ve battled to three straight overtime games. But then rough stretches like most of this game are enough to make one question if they’re asleep at the wheel.

With two games to play, maybe more clarity will come. Probably not, but this program could probably use a bit of normalcy next season.