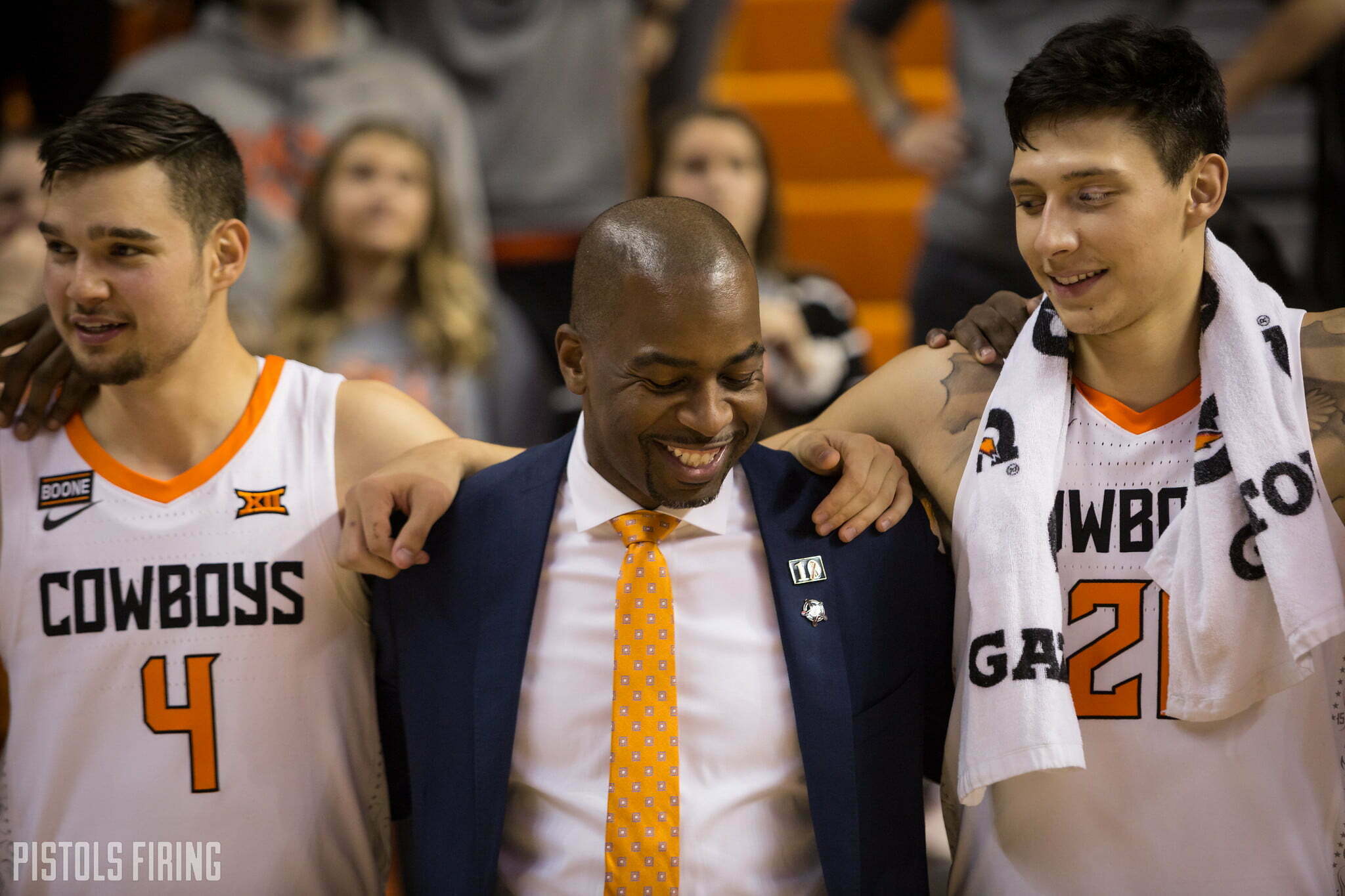 It was ugly early, and then it got even uglier late. But putting one in the win column in your final home game of the year looks nice no matter how you get there. Here are my five thoughts on OSU’s home finale win over Kansas State.

1. A Little History Made

With the win, the Cowboys complete a regular season sweep over the Wildcats for the first time in 26 years. That was back in 1993-94 season when the other Reeves was a junior. Tonight his son dressed for his final regular season home game. This is the only season sweep OSU will be able to boast this season.

Speaking of history, the Cowboys found a little GIA magic down the stretch.

Before you scream “sacrilege!” I’m not talking about vintage Gallagher atmosphere. I’m talking about Ws. The Cowboys finished their season winning five straight at home, the longest such streak since the 2012-13 season.

2. Cowboys Won the Battle of the Bench

In a game that finished pretty evenly across the (mostly ugly) box score, the Cowboys’ one big advantage was in reserve points. OSU’s backups outscored K-State’s 22-10. Along with Dziagwa’s 11, Kalib Boone chipped in nine points in 17 minutes off the bench. He also grabbed two rebounds and a block.

But that stat line doesn’t do the freshman justice. No. 22 was all over the court. He dove for loose balls, was disruptive on defense and made three of his four free throws. He might never be the best player at OSU, but he can be a really good one on a good team. I can’t wait to see what he looks like next year and beyond.

3. A Rough Finish for the Wildcats

You remember how grim things looked when the Cowboys lost their sixth in a row to start Big 12 play? Well, the Wildcats have now lost 10 straight. After back-to-back 25-win seasons, including an Elite Eight run two years ago, Bruce Weber’s team might not reach double-digit victories. The Wildcats are now 9-21 with a season finale at home against Iowa State and 10 seed in the conference tournament.

It was rough offensively for both teams most of the night, but when the home team’s shots started falling, the inept Wildcats offense couldn’t keep up. K-State shot 12-of-32 on the night (38 percent) and shot 17 percent from deep. The visitors made just two of their last 10 field goal attempts.

4. An Encouraging Finish for the Pokes

No, I’m not talking about how the Cowboys held on after almost coughing up a double-digit lead late. I’m talking bigger picture and what this promising February-into-March stretch means for OSU moving forward.

The Cowboys were 9-11 after getting stomped by OU in Norman on Feb. 1. Since then, they’ve gone 6-3 with those losses coming in Waco, Morgantown and Lawrence. That’s at least something to build off. And there’s still Austin and a chance to bolster your NIT case in Kansas City next week.

Does that mean the 2020 super class can seamlessly push OSU to a Sweet 16 next year? I don’t know, and I’m not even sure if you can count on any carryover over momentum. But OSU has some young players who can play to go along with what will be a pair of seasoned vets in Isaac Likekele and Yor Anei.

5. A Curtain Call for the Seniors

Senior Night festivities took place last Saturday when the Cowboys dispatched the Cyclones in GIA, but this was the actual regular season home finale for a group of seniors that includes Cam McGriff, Lindy Waters, Thomas Dziagwa and Jonathan Laurent.

Those four combined for 41 of OSU’s 69 points. McGriff led the way with 14 and five rebounds and this putback dunk.

Laurent was an efficient 2-for-3 (all 3s), scoring nine and grabbing six boards. Waters added seven. Dziagwa started 1-for-6 from deep but made a couple of big ones late to give the Pokes their final lead and then extend it.

Would each of them liked to have a better game? Sure. Would it have been nice to see Trey Reeves fire up the crowd in his final at-home? Absolutely. But if they had to choose, I think they’d all rather have it end this way — walking off with a smile.

The Cowboys put a bow on the regular season on Saturday when they take on the Longhorns in Austin. The Big 12 Tournament commences next Wednesday, March 11.

Enjoy some highlights from the win courtesy of OSU.