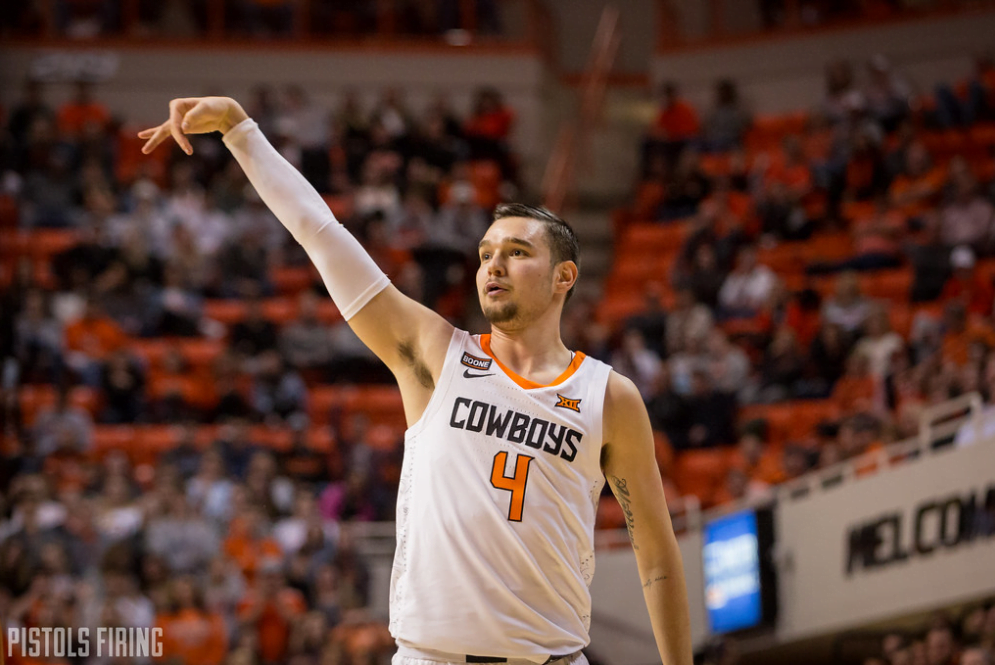 It finally happened. Oklahoma State was able to put the first ✔ in its Big 12 win column on Wednesday night, earning a much-needed victory over TCU.

The Cowboys started hot then outplayed, and led, the Horned Frogs for most of the night thanks to their best offensive outing in nine conference games. Let’s jump into five thoughts on the Pokes’ 15-point victory starting with the player of the game.

Ever since he made his return from illness, we’ve heard that OSU’s sophomore floor general hasn’t quite 100 percent. I’m not sure what level of health Isaac Likekele was at on hump day evening, but he seemed to be feeling pretty good.

Likekele turned in his first career double-double, leading the Cowboys with 15 points on nine shots and recording a career-high 11 assists against only two turnovers. It was the first points/assist double-double by a Cowboy since Jawun Evans in 2017. Likekele also added two blocks (!) and was plus-13 in the box score.

On top of all of that, he spent a good chunk of time defending the Horned Frogs’ best player in Desmond Bane. Bane had 14 but took 15 shots to get there and committed three turnovers while finishing a minus-12 in the box score.

Then Cowboys lost another wing in Chris Harris Jr., who started in his place but left just a few minutes in with a leg injury. Fortunately, several others stepped up.

3. Dizzy Gets His Own Thought

Six games ago Mike Boynton made the decision to plant Thomas Dziagwa and Yor Anei on the pine to start the game. That early conference schedule lineup change affected different players differently, but there’s little question that Dziagwa has made the most of it. His production has only gone up.

Other than his oh-fer against KU, Dziagwa now has scored at least 12 in five of those six games since being removed from the starting lineup. And he was huge again on Wednesday night firing proverbial arrow after proverbial arrow at the hearts of Jamie Dixon and his squad. He finished with 14 points, two rebounds and two assists.

4. Yor Back in the Starting Lineup

After coming off the bench for four straight games, Yor Anei started Saturday against Oklahoma and did so again against the Horned Frogs. He played well making his first three shots and scoring in double digits for just the second time in nine conference games.

What’s more, Yor didn’t pick up his second foul until nearly six minutes into the second half, allowing him to impact the game on both sides of the ball. Yor finished with 14 points, three rebounds and three steals in 31 minutes. He needs to put it together more consistently now as a veteran on this team, but it’s easy to see the type of impact he can have when he’s feeling himself. He was on Wednesday.

5. Can Boynton Bottle This Up?

After scoring just 41 points in their first tilt with TCU, Oklahoma State had 38 at the half and enjoyed its best first half from the field all season, shooting 47 percent. (And that was even with an 0-of-10 stretch down the period’s stretch.) They finished with 72 and their 43 percent from the field on the evening was their best mark in nine Big 12 games.

But it was more than just making shots. The Cowboys won the battle of assists 16-10, the turnover battle 17-8 and earned twice the points off those TOs (14-7). TCU came in third in the league assist-to-turnover ratio and fourth in scoring defense.

If OSU is looking to turn things around over the second half of league play, they’ll have plenty to prove against No. 1 Baylor next Saturday.

• The Boones provided a spark as they continue to grow. Kalib and Keylan came in averaging 3.3 and 2.9 points per game, respectively, but combined for 10 points on nine shots. That might not seem huge, but those were big shots and the pair provided needed depth as the Cowboys were shorthanded and with Cam McGriff in foul trouble.

• With the win the Cowboys narrowly dodged the designation of the worst start to conference play in school history. I realize that hardly makes fans happy when looking at the grand scheme of things, but that worst-ever list is not one you want to be on.

• 1-8 is still 1-8, meaning the Pokes are on pace for a 2-16 finish. But they had to get that first W sometime and now they have it. Whether or not that gets them over the hump or proves to be an aberration remains to be seen, but inside of a vacuum (if we can look at one game that way) I liked what I saw from the Cowboys sans Waters and with several younger players seeing plenty of court time.

Next up the Cowboys head to Waco on Saturday for a rematch with Baylor, the nation’s top team. OSU did play the Bears about as hard as any in its Big 12 eight-game skid, so we’ll see if they can make things interesting on Saturday night.