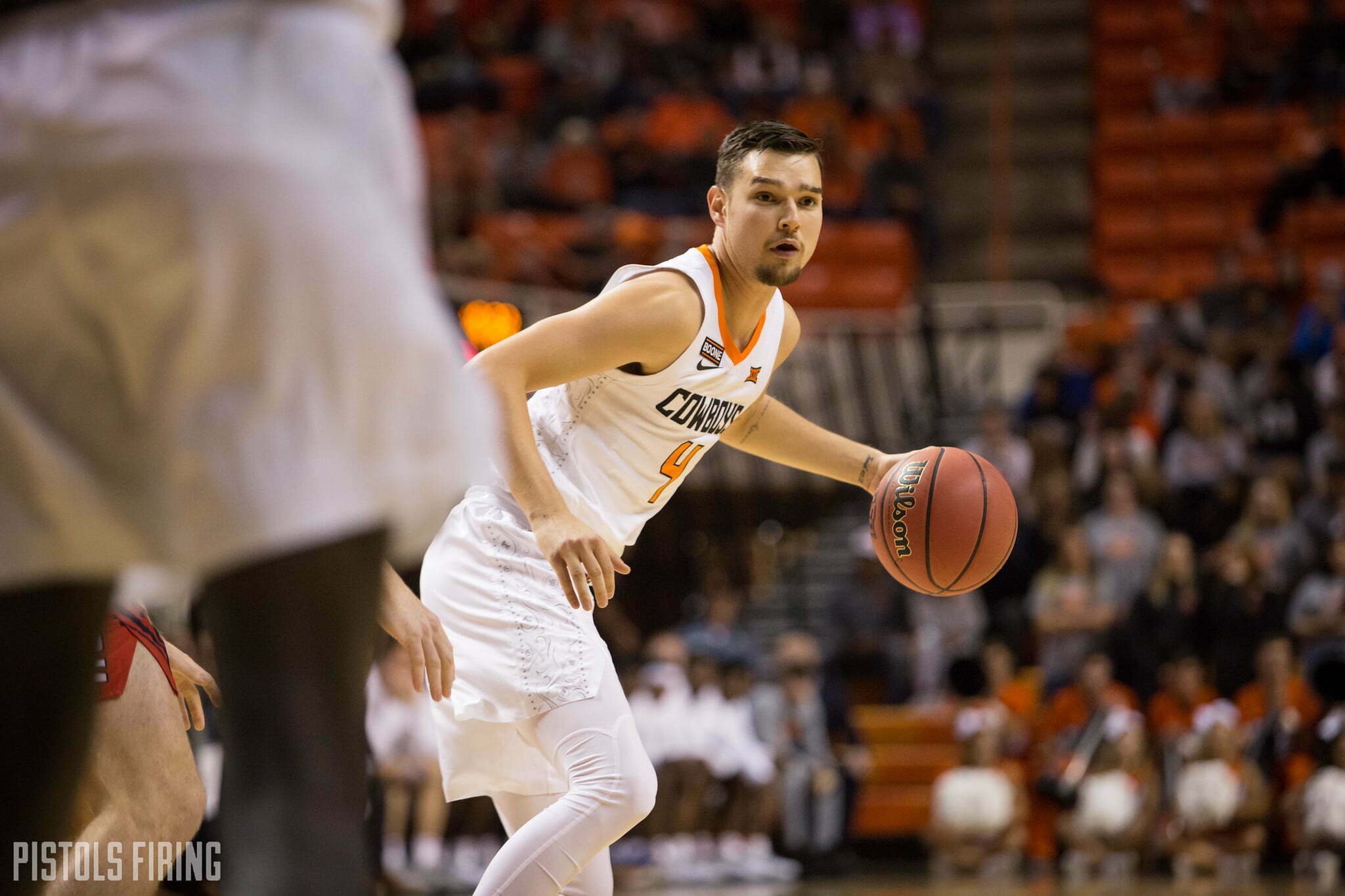 That second half was about as good as it gets for the Cowboys.

Oklahoma State defeated Charleston 73-54 on Wednesday night in South Carolina after the Cowboys outscored the Cougars 43-24 in the second half.

Thomas Dziagwa stabilized the Cowboys in a rough first half that saw OSU struggle from the field and star center Yor Anei sit with two fouls after playing only five minutes. Dziagwa scored 12 points in the first half, and finished with a game-high 21.

After Dziagwa got them to the locker room, the Pokes came out and dominated. OSU shot 55.6 percent from the field in the second half and held Charleston to just 34.8 percent. The Cougars also turned the ball over nine times in the second half, six of which were OSU steals.

It was the most impressive win of the season for the Cowboys, and here are five thoughts from it.

1. This Team is Different

I think last year’s OSU loses this game after that wonky start.

In their first try this year, after getting shell shocked in the first half, the Cowboys won by 19 against a good mid-major team.

Things are a changing with OSU basketball. Everyone knew that was a thing with Cade Cunningham’s signing, but it might be here now.

There will still be a bump or two in the road for Boynton’s squad this year. The Cowboys’ entire bench is new to the program, and most are freshmen. But this team is different than last year’s, and it’s a good different for OSU.

2. This Is Why Thomas Dziagwa Is Good

He essentially kept the Cowboys in the game by himself until the rest of the team got going. Dziagwa finished with a game-high 21 points, going 7-for-10 from deep.

“But Marshall, he isn’t a good defender.” “Marshall, you know all he can do is shoot 3s, right?” Yes I know this, but he is dang good at his job. He knows his role. By the way, that’s a normal day in the PFB Slack of me defending Dziagwa.

In the Oral Roberts game, only Isaac Likekele and Lindy Waters played 30+ minutes. Against UMKC, no Cowboy played 30 minutes. But against Likekele, Dziagwa, Waters and Cameron McGriff all surpassed 30 on Wednesday night, and the result was a 19-point road win.

I’m now comfortable saying that OSU could’ve won more comfortably against its first two opponents, but Boynton gave his inexperienced guys some run and the games were closer than they could have been.

But against the best team the Cowboys have played this year, Boynton let his killers loose, and three of the five starters finished +20 or better in plus/minus. And now OSU’s freshmen have more experience than they would have had if Boynton would’ve just gone for the kill against those first two teams.

OSU’s starters combined for 63 points, 23 rebounds and 17 assists. It’s a solid group, and the two from it with the highest ceilings are only sophomores.

Kalib Boone is a dude.

Boynton brought Boone’s consistency into question after his dominant performance in the Rogers State exhibition. He didn’t score against Oral Roberts, but had a nice eight-point, three-rebound, three-block performance against UMKC.

Boone built on that Wednesday night, scoring in double figures for the first time in his college career. He finished with 10 points, three rebounds and two assists. He was efficient as well, shooting 5-for-9 from the field.

Him being there and being solid when Anei gets in early foul trouble was something the Cowboys didn’t have a season ago.

In the first half with Anei on the bench for all but five minutes, Boone came on and played 10 first-half minutes. In that half, he scored six points on 3-for-4 shooting and had a steal and a block on the defensive end.

5. Isaac Likekele is a Silent Killer

That clip transitions nicely into this next point.

In a game where the Charleston fans were getting mad about Thomas Dziagwa shooting arrows throughout their arena and Kalib Boone throwing down dunks in his first road game, Isaac Likekele was an assassin.

Likekele finished with 12 points, five rebounds and seven assists. He was 4-for-6 from the field and 4-for-4 from the foul line. He wasn’t incredibly flashy, apart from this:

But he was incredibly effective. He’s a walking mismatch for most of the point guards he faces, and he knows it. He also knows how to take advantage of it.