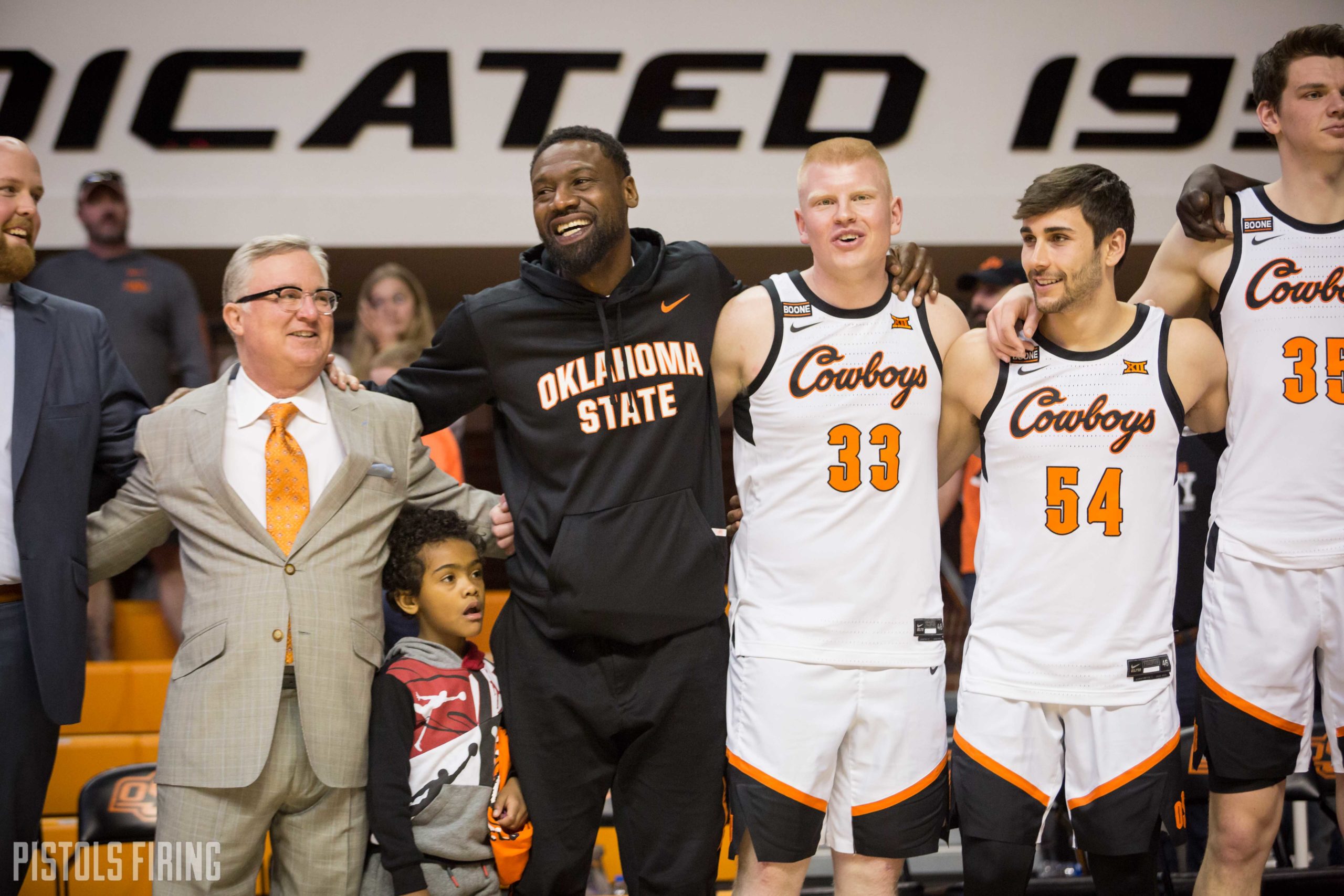 Oklahoma State rolled over Iowa State in GIA on senior day Saturday as it took the Cyclones down 73-61 and didn’t trail for the last 28 minutes of the game.

The Pokes’ seniors showed out (more on that below), and OSU has suddenly won three straight Saturday games at home after — at one point earlier in the year — it looked like they might never win another conference game at all.

The victory takes them to 15-14 on the season and 5-11 in Big 12 play with two winnable games on the slate (KSU at home and Texas on the road). Before we get to those though, let’s get to five thoughts on a sendoff for OSU’s departing seniors.

1. Points by class: I was thinking about this as I ran through the box score after the game. Let’s look at points by classification for this game.

So as much as we’re like, “Well wait until those freshmen come in next year,” you’re still going to be replacing a good chunk of scoring in games like this one. I think you can do it, but we (I) probably underrate how difficult it is to actually do. This game — in which Dizzy, Lindy, Cam and Laurent scored 49 of OSU’s 73 — highlighted that.

2. Easier buckets: OSU shot four 3-pointers in the second half and missed them all. They were 13-for-18 on all other shots and 11-for-12 from the line. That’s 24-for-30 on non-3-pointers in the last 20 minutes. The “maybe we shouldn’t hoist 35 3-pointers a game” thing is real, and OSU is showing why it matters. The Pokes got 24 of their 32 points in the second half from inside the paint, and took advantage of mismatches on guys like Avery Anderson, Yor Anei and Kalib Boone.

Here is OSU’s record by month.

Coincidence? Maybe, but also maybe not. Other than Dizzy, I don’t know that I want anybody pulling from distance. He was 4-for-8 on Saturday, and everybody else was 1-for-6. That’s about what I expect and about what it should be.

3. Cam’s legacy: He’s not one of the all-time greats, but man I wish he’d been allowed to be the fourth- or fifth-best guy on a Big 12 title-winning and No. 2 seed OSU team. He’s always been forced into uncomfortable spots because OSU didn’t have the talent in front of him it needed, but he’s become such a solid, capable college basketball player. Of all the senior skill sets on next year’s squad, his will be missed the most (don’t get me started on what he could do with Cade handling the ball).

4. Kalib Boone per-40: Let’s chat. From a minute-for-minute perspective, Kalib Boone has been the best player on OSU’s team in conference play. I get it, you have to sustain that and you have to stay out of foul trouble, but here are the per-40 numbers for OSU’s six most efficient scorers in the Big 12.

He’ll have to improve in a lot of different ways, but sign me up for Year 2 (and Year 3 and Year 4) of Kalib Boone (and hopefully Keylan as well).

5. Family: The mantra of every college team in every sport across the country. But OSU lived it out on Saturday in GIA when Jonathan Laurent’s family couldn’t make his senior day. Thought this was awesome, and that despite the record, OSU’s basketball culture hasn’t been better than this in a long, long time. Maybe that’s an idealistic, optimistic viewpoint, but it’s the one I hold.

Cowboy grad transfer Jonathan Laurent’s family couldn’t make it to his senior day today so the entire @OSUMBB team walked out with him! #OkState @Phenomballa_4 pic.twitter.com/z5eI73iv2v

6. Speaking of family: This one hit me pretty good. As far as “passage of time” pics go, there aren’t many I can think of in OSU world that have been heavier in recent years.