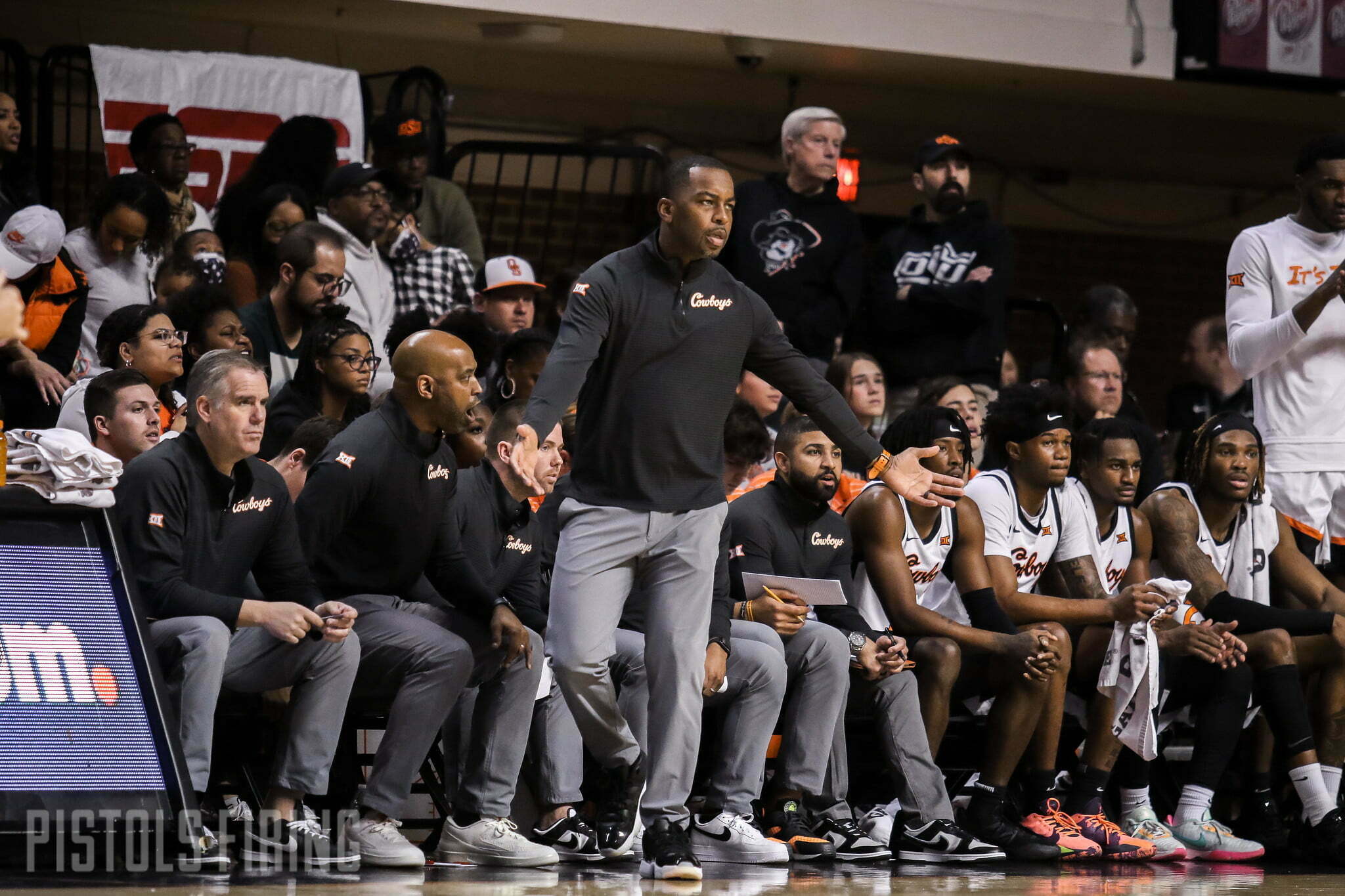 WACO, Texas — The Cowboys played their worst game of an already tough season on Saturday.

Oklahoma State fell to Baylor 74-58 at the Ferrell Center in a game the Cowboys never lead and trailed by as many as 28 points. Although it’s the Cowboys’ eighth loss of the year, it’s the first time OSU has been blown out. A woeful offensive performance was paired with Baylor shooting 38% from 3, and that was a bad concoction for the Pokes. Here are five thoughts on the game.

Not long after the pregame prayer at the Ferrell Center in Waco the Cowboys were down a baker’s dozen.

For the final 36ish minutes of the game, OSU was -3 after spotting Baylor 13 points. Baylor started the game 4-for-4 from the field, hitting a trio of 3s. Meanwhile OSU was 0-for-5 to start the game, missing four 3s in that stretch.

It’s going to be tough to win any game when you start down that many points.

“A little bit of everything [went wrong],” OSU coach Mike Boynton said. “When you’re having scouting breakdowns against guys who you obviously highlight as you prepare, it doesn’t foster a whole lot of confidence moving forward. I think their first play was something that we worked on for three straight days. Simple baseline screen for LJ Cryer, he comes off wide open, makes a 3. It just sets a bad tone.”

The Cowboys had their worst 3-point shooting performance Saturday since being in The Bahamas in November. OSU was 7-for-33 against the Bears. At 21.2%, the Pokes haven’t shot worse since shooting 2-for-20 in an overtime loss to UCF.

“I thought we shot relatively good shots,” Boynton said. “I’ll have to go back and watch it to really assess where it came from, whether they came from the right people, the right places on the floor. But I didn’t look up and feel like, ‘Man, we’re taking a bunch of bad shots.'”

Kalib Boone has been the Cowboys’ offense the past few games, but after picking up two early fouls and playing only seven first-half minutes Saturday, he didn’t get going.

He finished Saturday with eight points (all of which came in the final three minutes when the game was already well in-hand) after averaging 16.3 points a game during OSU’s past three.

“They double-teamed him, too,” Boynton said. “I think from the very start of the game, a part of their game plan was to not allow him to be an anchor offensively. And in that case, that’s going to lead you to shooting more shots from the perimeter.”

Elsewhere in the post, Moussa Cisse missed his third straight game with an ankle injury. Like the past two games, Cisse dressed but wasn’t all that active in pregame warmups.

“There’s no doubt that [Cisse not playing] is a factor, but that’s a part of the game,” Boynton said. “Injuries are an inevitable part of the game. You hope it doesn’t happen to your best defensive anchor and a guy who can create open shots for other guys because he’s a threat to score at the rim, but when that happens, a really good team has someone else or a few guys step up and play a little bit better and coalesce around that and maybe we can find something that we didn’t know about our team before. Today was a step backward in that regard.”

It was the imperfect storm for the Cowboys in that their two starting bigs weren’t on the floor and they had one of their worst shooting performances of the season.

Avery Anderson had scored only five points in the Cowboys’ past two games, and — though he didn’t go nuclear — he scored 11 against Baylor. It’s just his second game in double figures in Big 12 play.

Anderson scored a lot of his points at the rim as he got aggressive to try to ditch his offensive slump. He has, however, struggled mightily from 3 this season, hitting just 18% of his shots from long range. In OSU’s past five games, he is 0-for-13 from deep.

Texas State transfer Caleb Asberry was seemingly the only Cowboy with a chance to hit from 3 Saturday, going 4-for-11 from deep while the rest of the Cowboys went just 3-for-22. Asberry finished with 14 points — his second straight game in double figures. He also played some solid defense, finishing with, seven rebounds, two blocks and a steal.

Oklahoma State will enter Bedlam on Wednesday in the bottom three of the Big 12 standings. The Sooners are no world beater — having an ugly finish in a win against West Virginia on Saturday — so in the middle of this chaos that is the Big 12, beating another potential bubble team feels like a big deal. As it just so happens that other team is your biggest rival.

The Cowboys host the Sooners at 8 p.m. Wednesday in Gallagher-Iba Arena. With their win Saturday, the Sooners are 2-3 in Big 12 play. The only teams below OSU in the Big 12 standings are 0-5 West Virginia and 0-4 Texas Tech (the Red Raiders are playing Texas as of writing).

There has been talk of the possibility of all 10 Big 12 teams making the NCAA Tournament. That seems unlikely at the current time. This current iteration of the Big 12 hasn’t gotten more than seven teams in the dance, so hanging out in the eight, nine and 10 spots isn’t where you want to be.

“The process can’t change,” Boynton said. “Whatever went into today happening, we’ve got to own it. I’ve got to take personal accountability as the head coach, myself. Each player also has to look in the mirror and figure out what more or what better they can do for the group. At the end of the day, that’s what it’s gonna take. It’s gonna take everybody digging down a little deeper, finding a little bit more and bringing it in a confident way, in a way that can translate into success.

“It’s probably a double-edged sword in that there are probably still a lot of good opportunities out there for us, but no one is gonna fix it for us. No one is gonna feel like, ‘Oh those guys are struggling. They lost of tough one early. They’re without their starting five man.’ No one cares. So we gotta get back to the drawing board and figure out how to fix this stuff.”