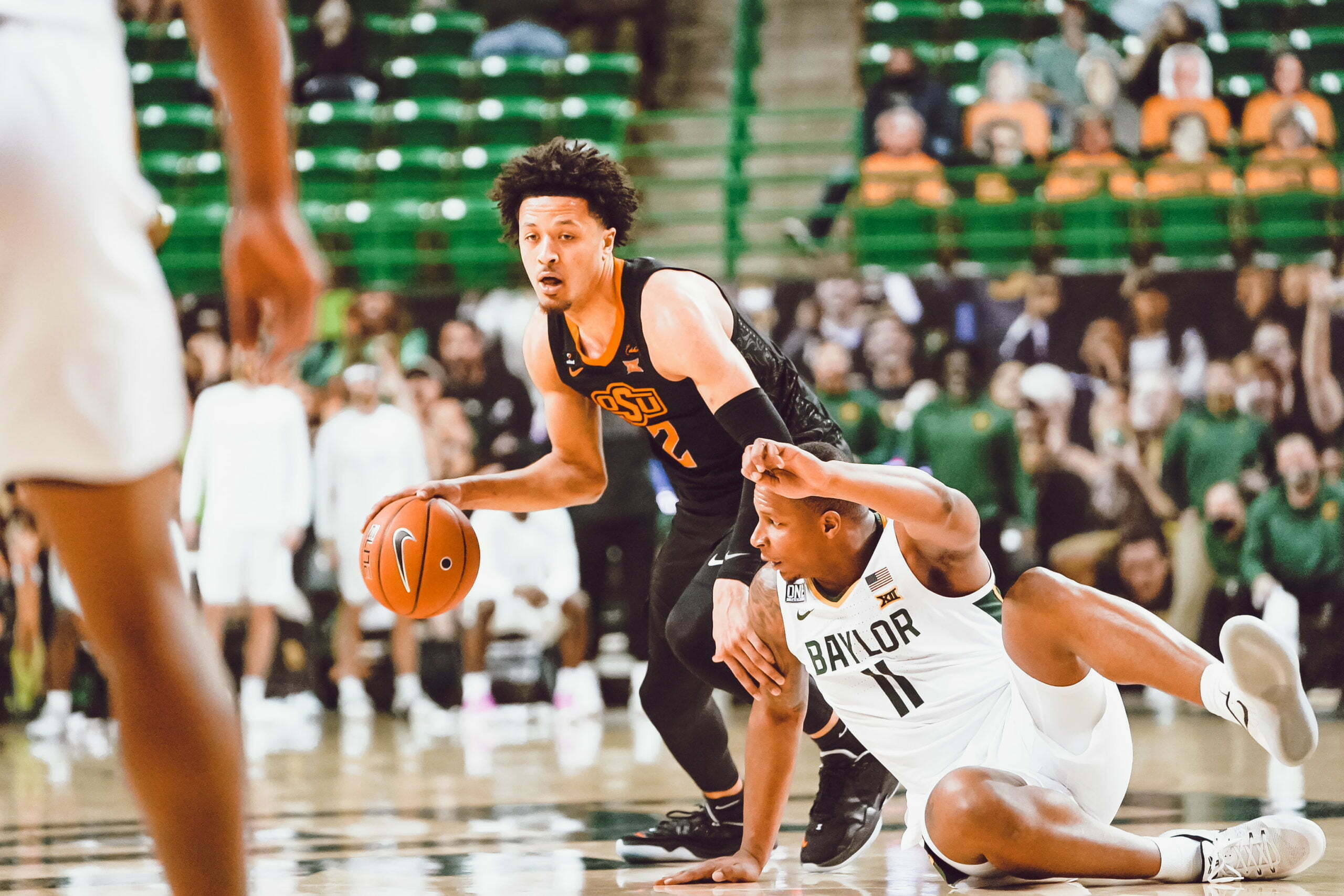 The Cowboys’ streak ends in Waco.

Oklahoma State fell to Baylor 81-70 on Thursday night. The loss snapped the Pokes’ five-game winning streak, but the final minute saw something that could effect the rest of the Cowboys’ season. Here are five thoughts on the game.

Cade Cunningham finished Thursday’s contest with a game-high 24 points and seven rebounds, but OSU fans will go to bed Thursday night thinking about his left ankle.

Cunningham rolled the ankle in the final minute of the game and needed help getting off the floor. He was able to walk to the locker room by himself after the game with a slight limp.

“It happened right in front of me there,” OSU coach Mike Boynton said in his postgame Zoom. “I didn’t see any anything unusual other than he stepped on a guy’s foot and rolled it. He’ll get an evaluation, and as soon as we know more obviously pass it to you all.”

As for his game before those final 44 seconds, Cunningham turned back to second-half Cade. He had four points on 2-for-8 shooting in the first half before erupting for 20 points on 11 shots in the second half.

He also finished 4-for-8 from 3-point range. It’s the third time this season that Cunningham has hit four 3s in a game. On the year, he is shooting 43% from 3 and has made 45 this year, both lead OSU.

It felt like he played just alright Thursday night, which makes the fact that he dropped 24 points on the No. 3 team in the country all the more impressive.

Oklahoma State was perpetually down 11 from halftime until the final buzzer.

The Pokes struggled in rebounding and turnovers (stats that matter to teams looking for an upset) in the first half, but were able to play the No. 3 Bears tightly throughout the second half.

The Cowboys cut Baylor’s lead to four on two occasions in the final four minutes, but the Pokes couldn’t quite take that next step, which is, in large part, a credit to Baylor.

The Bears had a near-monthlong pause because of COVID protocols throughout February, but it looks as if they have their sea legs back.

Baylor was out for 21 days from Feb. 2 to Feb. 23. Upon their return, Baylor struggled against an Iowa State team that has yet to win a Big 12 game. The Bears followed that up with their first loss of the year to Kansas.

Baylor started to look itself again in an overtime win in Morgantown, and with just OSU’s luck, Baylor was back to full-go Thursday night.

The term 3-and-D is growing more popular in basketball, and the Bears have about 13 3-and-D guys on their roster. The Bears were 9-for-22 from 3-point range against OSU and forced the Pokes into 18 turnovers, including 11 steals.

The Cowboys are much better than they were a few months ago, and their second half showed they can at least compete with Baylor. But, that first half also showed that there is another level the Cowboys will have to get to in order to get past the nation’s elite.

Ferron Flavors played 12 minutes Thursday, all of which came in the second half.

It’s the most amount of minutes he has played since Feb. 16 against Iowa State. He hit a 3 Thursday and finished a team-best even in plus-minus.

His minutes came at the expense of freshman guard Rondel Walker, who struggled. Walker finished with one point on 0-for-3 shooting to go with one rebound, one assist and two turnovers in 18 minutes.

Walker is just a freshman after all, so struggling against the No. 3 team in the country should be expected, but it was promising to see that Flavors was able to go for extended minutes despite playing limited minutes for much of the latter half of the year.

“Rondel didn’t have it today,” Boynton said. “That happens. That’s why you have depth.

“Ferron’s been here, and I felt confident that if he got in there had an opportunity, he would be ready. I thought he was.”

5. Time to Get Weird

The Cowboys will stay in Waco on Thursday night before flying straight to West Virginia on Friday morning for a bout with the No. 6 Mountaineers on Saturday.

The Pokes are plum in the middle of a weird stretch that will have them away from home for much of the next month. From West Virginia, the Pokes should get a day or two in Stillwater before heading up to Kansas City for the Big 12 Tournament.

It has to be the toughest stretch in basketball this season, starting with the two Bedlam games in three days that started Saturday. Some view OSU playing with house money at this point, having just come off a five-game winning streak and beating three straight ranked teams ahead of Thursday’s loss.

The physical toll will be interesting on the Cowboys, but the mental side of it might be just as taxing, especially if OSU loses again Saturday. This young squad is away from home for an extended period of time and playing a ton of high-level teams in a short amount of time.

“We can’t dwell on it. We didn’t just lose at home to a bad team. We lost on the road to a team that, they’ll be an No. 1 seed in the NCAA Tournament. So, I won’t let our guys hang their heads because we’ve accomplished a lot, and there’s still a lot more out there in front of us.”