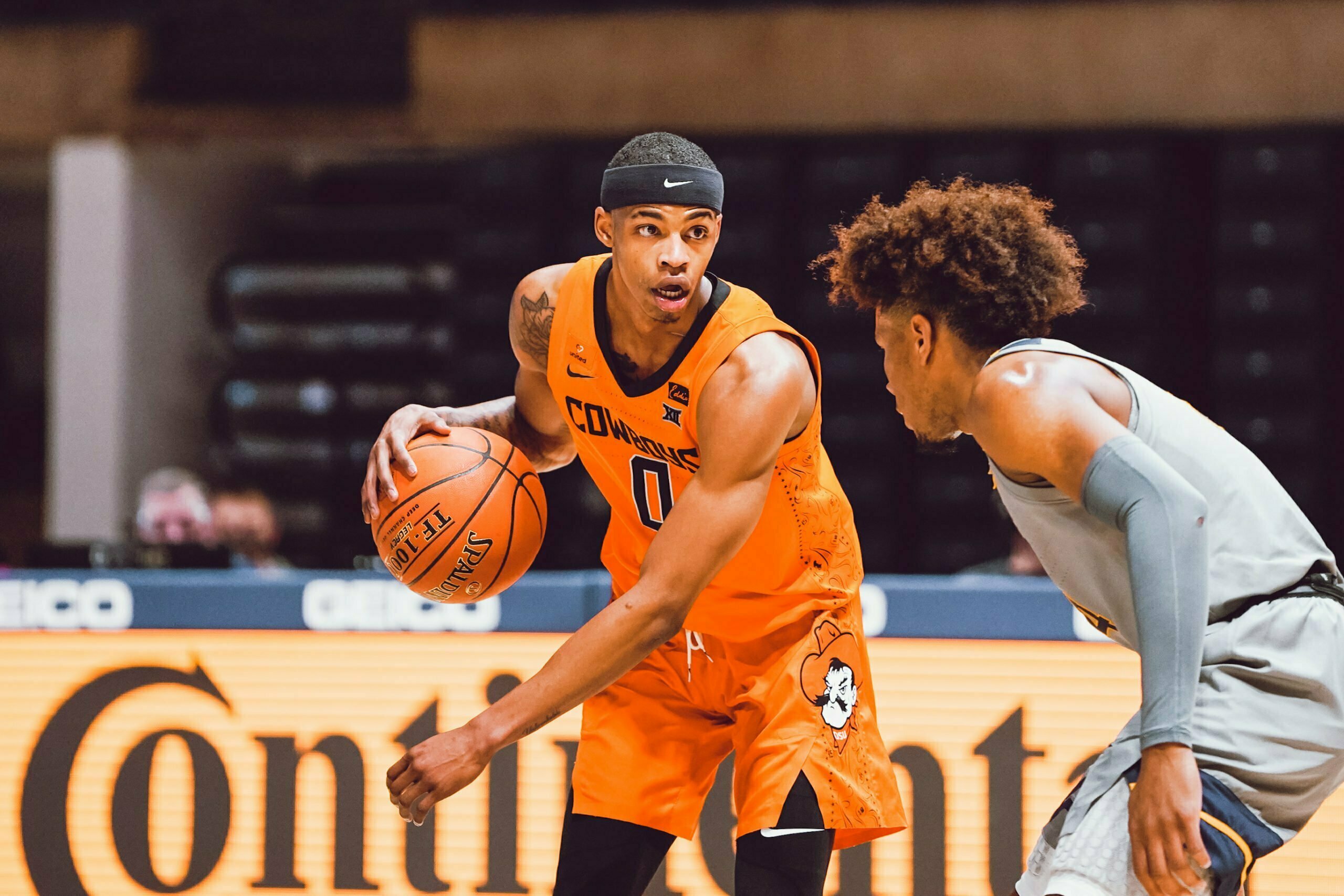 Without their two best players, the Cowboys went on the road and beat a Top-10 team in March.

Oklahoma State beat West Virginia 85-80 on Saturday in Morgantown without Cade Cunningham and Isaac Likekele, doing so with hustle and a big dose of Avery Anderson. Here are five thoughts from OSU’s 18th win of the year.

For those have followed this team closely this calendar year, it seemed obvious who was going to have to step up in Cade Cunningham’s and Isaac Likekele’s absences if OSU was going to win this game: Avery Anderson. And he did.

Anderson put up a career-high 31 points and did so on 11-for-14 (79%) shooting. He was also plus-11 in plus/minus, meaning OSU was 11 points better than West Virginia with Anderson on the floor.

This type of eruption has been coming for Anderson, who has scored in double figures in 12 of his 22 games played this season. Eleven of those games have come since Jan. 1.

His most important bucket of Saturday’s game came in the final minute, defending a 2-point lead. Anderson, who is elite in isolation, called for Kalib Boone to clear out and took on Taz Sherman one-on-one. Anderson made a hesitation move to his right to get a step on Sherman, and then he gained extra separation with a hop step right before hitting a midrange jumper.

Anderson said the plan was to get Sherman switched on him. Miles McBride, WVU’s best perimeter defender, was guarding Anderson down the stretch. But the two defenders switched after Bryce Williams set a screen for Anderson.

“When I got the switch off, I knew I could do my thing and try to go get a bucket for our team,” Anderson said. “… I knew I just had to go make the big-time play for my team, and the shot went in.”

2. Not Too Shabby for Being ‘Mediocre’

The national view on this team this season is that Cade Cunningham has the worlds largest backpack strapped on and that he is carrying the his teammates inside of it.

It’s an easy thing to think, and it’s impossible for these national writers to watch every game of college basketball. But as Mike Gundy would say, “That ain’t true!”

Mike Boynton recruited and developed some solid pieces outside of Cunningham, and that was obviously on full display in Saturday’s game.

ESPN draft analyst Mike Schmitz wrote an excellent piece on what makes Cunningham so great earlier in the year. It was great. You should read it. However, in it Schmitz put the line, “He’s already knocked down two go-ahead jumpers in the final 30 seconds that led to wins and has made a host of other huge plays down the stretch of games on a Cowboys team that has no business being 12-6 based on its mediocre talent.”

It was a throwaway line that Schmitz probably didn’t mean much offense by, but when I read it, my eyebrows raised a bit.

Yes, Cunningham should have more assists this season because OSU hasn’t been stellar from 3-point range, but mediocre talent doesn’t go into Morgantown and get a win against a Top-10 team in March. The other Cowboys did that.

“Cade has kept that noise away from them,” Boynton said. “He infuses confidence in these guys every night. Cade should have more assists than he does so far this year, but he hasn’t stopped passing the ball. He still passes the ball to guys that are open, and that continues to give them the belief that he knows that they’re good enough to help him also.

“Now, there’s no question he’s elevated the level of play for a lot of the individual guys, but those guys are all really good. We got a really good team.”

Anderson led the way, and Matthew-Alexander Moncrieffe added 18 points in 22 minutes before fouling out. Kalib Boone contributed 12 points, and Keylan Boone, who has played sparingly this season, added 11 points.

The Boone twins also combined for a big defensive stop at the end of the game.

Cunningham is the best player on this team, and the team is better when Cunningham is on the floor. But, the future looks like a ton of fun. The Cowboys’ roster is filled with young guys who give a ton of effort and showed Saturday that they also have some skill to go with their hustle.

OSU had no business going to Morgantown without its two best players and beating a Top-10 team, especially when the Cowboys turned the ball over 20 times.

But perhaps the biggest stat that said why OSU shouldn’t have won this game was foul shots.

West Virginia had 34 attempts at the foul line to OSU’s 20, and a handful of OSU’s came with West Virginia being forced to foul to extend the game.

That 14 free-throw difference is the fourth biggest disparity OSU has had in a game this season, and in the three biggest, the team who shot more won the game.

The Cowboy post players have been dogged all season for not being able to handle physically imposing opponents, but that group took a step forward Saturday.

In the Cowboys’ first meeting with West Virginia, Derek Culver scored 22 points and had 19 rebounds. Saturday, he had 14 points and five rebounds. Eight of his points came from the foul line.

It was Kouma’s most productive day as a Cowboy, as he had six points and 10 rebounds in 21 minutes before fouling out. Those numbers were all career-highs.

Kouma also had a clutch offensive rebound and put-back off a Keylan Boone airball. Kouma’s bucket put OSU up 3 with less than three minutes to play.

I mentioned above that Moncrieffe scored 18 points in just 22 minutes.

“Thought Matthew-Alexander Moncrieffe was a man today in a game when we needed him to be a man,” Boynton said. “I’m so proud of that kid because Cade has overshadowed a lot of those other guys. He’s having a really good year, too, kind of quietly. Certainly think he’s one of the best freshmen in our league, and I look forward to coaching for a long time.”

Over his four seasons as a head coach, Mike Boynton is 13-7 in the last five games of each regular season. In the past two years, he is 8-2 in that stat.

The Cowboys just came out of a gauntlet of five ranked teams where they went 4-1, and that spree included two Top-10 wins.

I touched on this a bit last week, but the synopsis of that piece is that Boynton’s teams heat up at the end of the season. It’s particularly noticeable this year where the Cowboys could compete for a No. 3 seed (maybe a No. 2 seed?) in the NCAA Tournament.