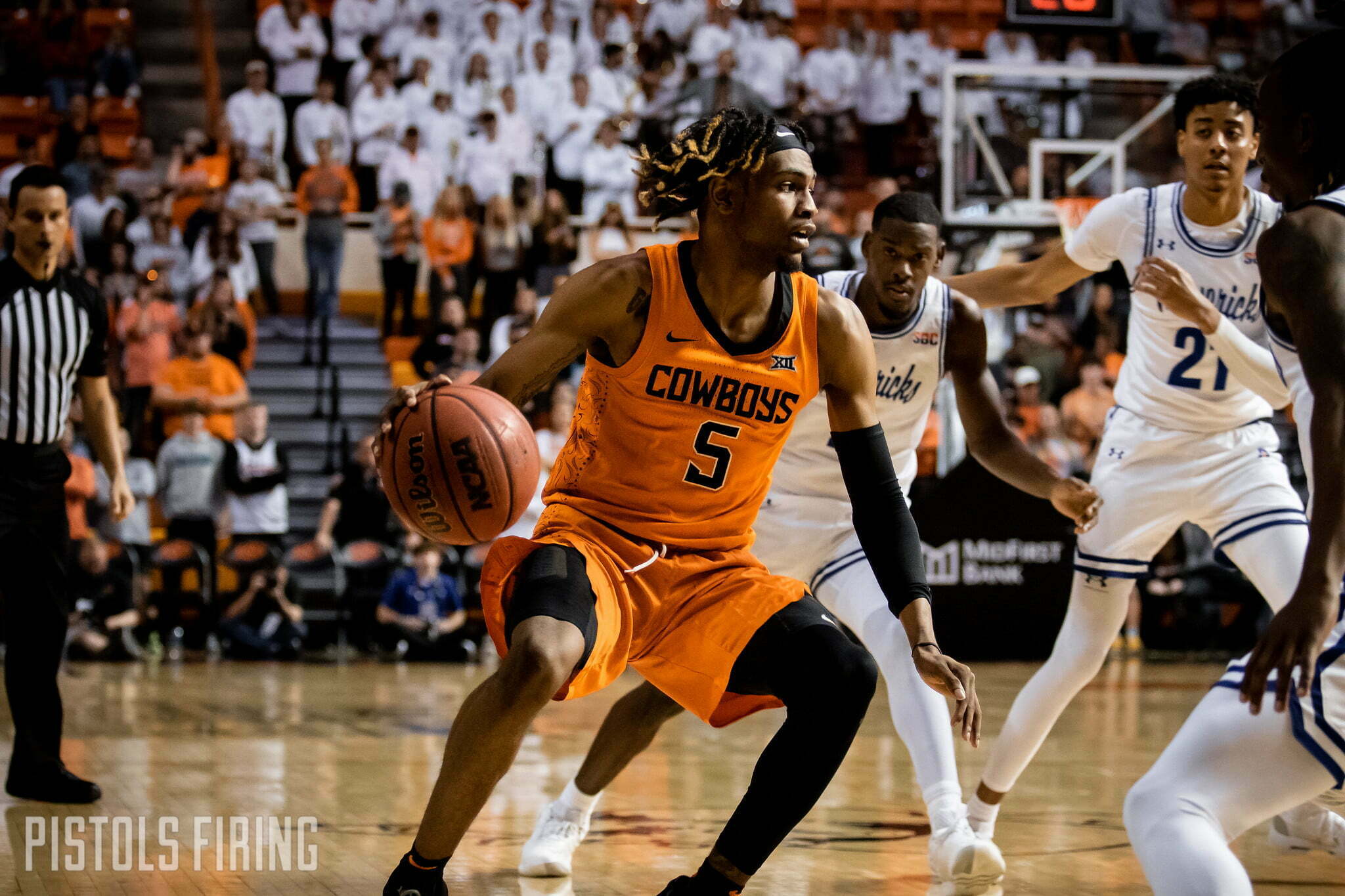 STILLWATER — Somebody had to play the first official game against the Cowboys after the NCAA ruling; UT-Arlington drew that short straw.

The Mavericks actually started the game with a 1-0 lead after a technical foul was called against OSU for changing it’s starting lineup within 10 minutes of the tipoff. Bernard Kouma was initially listed as an OSU starter before Moussa Cisse took his spot. That 1-0 lead was the only lead UTA ever held.

OSU went into halftime with a 43-14 lead. Avery Anderson nearly outscored UTA in the first half, putting up all 13 of his points.

Moussa Cisse was dominant in the second half, putting up 11 points on six shots. Cisse ended his first official game as a Cowboy with a team-high 17 points and nine rebounds to go with a pair of blocks, an assist and a steal in just 17 minutes.

UTA went on a 13-3 run halfway through the second half to pull within 31 (yikes), but OSU responded with a 17-2 run to continue the slaughter.

A statement was made Tuesday night, as the Cowboys showed no mercy to the unfortunate team that was first on its schedule.

There was a point in the second half, OSU had a full-court press on up 57-18. With the shot clock off, Boynton gave Weston Church the green light to score his first college bucket in the final seconds.

It isn’t often the internet is unanimous on something, but it is pretty close to unanimous in that the NCAA shafted the Cowboys by upholding their postseason ban. So, now it seems like the Pokes are coming for throats to prove they should be playing in March.

“We want to make a statement every night,” Boynton said. “Our kids want to make a statement every night. Obviously, I have a lot of respect for (UT-Arlington) Coach (Greg) Young. I think eventually he’ll get that program going and have a really successful run there. I know a lot of the kids on their team, their staff, but it’s truly about us and trying to make the most of whatever this team is going to be able to do. Tonight was just the beginning of it.”

Keylan Boone looked like an NBA prospect in the first few minutes of his junior season.

Coming off the bench, Boone fought for rebounds, played tight defense and hit a couple of 3s. At halftime, he had eight points on only four shots to go with six rebounds (four of which were offensive), an assist and a steal. He did all that in 12 first-half minutes.

He finished with 10 points and eight boards.

Boone has shown flashes like this in the past. He had a 10-point, 12-rebound double-double against UTA last season. He scored a career-high 13 points in the Cowboys’ NCAA Tournament game against Oregon State last season.

The sky is the limit for Boone’s long, 6-foot-8 frame with his ability to rebound and shoot, but consistency has moreso been the question. Boynton said after the game that there is reason to believe that consistency can come in his junior season.

“He’s had more consistency in practice this year than he has his first two,” Boynton said. “His freshman year — a lot of them, even a guy like Avery (Anderson) that had no idea what it takes to be successful, certainly at this level, but really any level. Then last year was a little bit better, but still didn’t have an identity. And this year, I think he feels like there’s a little bit more urgency, and he’s looking over his shoulder. If he doesn’t play well, you could get buried on this roster, a little bit. So, trying to have a little bit of urgency so that doesn’t happen.”

Most people you poll would probably pin Avery Anderson as this team’s leading scorer when the year is over, and he showed why early Tuesday.

Anderson went into the break with 13 points (one fewer than all of UTA). He shot only three shots in the second half, none of which fell, but he also finished with four rebounds, five assists, a block and three steals. His +35 was also a team best in the 26 minutes he played.

As deep as this team is, don’t expect too many of Boynton’s barrage of guards to outperform Anderson on a nightly basis.

It came from a couple of different places, too. Anderson was 3-for-5, Bryce Thompson hit a pair, Boone hit a pair and Donovan Williams and Woody Newton both hit one. This team is long and athletic — that’s undebatable. If the Cowboys can hit a steady stream of 3s, their true ceiling will be reached.

Oklahoma State starting this year down 1-0 before the ball was even tipped provided quite the moment of symbolism.

Boynton said it was a “clerical” deal that Bernard Kouma was listed as a starter that was caught too late. The switch within 10 minutes to tip was a technical foul, allowing UTA to take a free throw without the ball ever being put in play. The Pokes overcame the incident quickly. Cowboy fans will hope the program does the same with these NCAA sanctions.