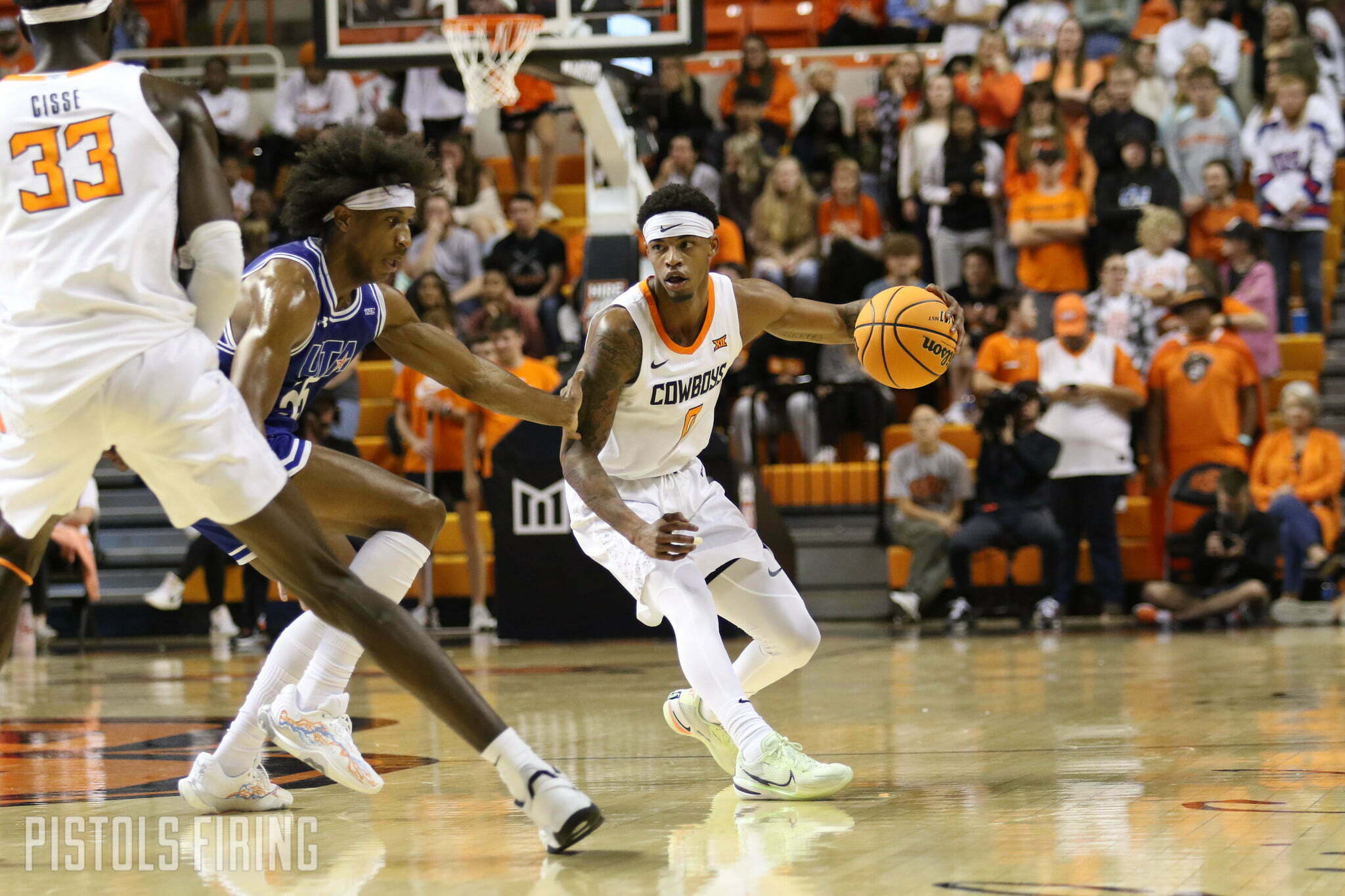 After an upset loss on Thursday, the pressure was on the Pokes, and they responded well.

Oklahoma State throttled Oakland 91-62 on Sunday in Michigan. After shooting just 24% from 3 in their opening two games, the Cowboys torched the nets, going 12-for-23 (52%) against the Grizzlies. Free-throw shooting was also a question mark through two games — OSU was 9-for-10 from the line Sunday.

1. Wright, Asberry Do What They Were Recruited to Do

John-Michael Wright and Caleb Asberry combined to make 128 3-pointers at a 37% clip last season at their respective schools, but two games into their Cowboy careers, something wasn’t clicking quite yet. It started clicking Sunday.

Wright and Asberry went 7-for-12 from 3-point range, combining for 29 points. With the Cowboys under pressure from a mid-major loss in GIA because of poor shooting, their transfers answered.

The newcomers weren’t the only Cowboys getting hot from 3, Chris Harris was 3-for-4 from deep and finished his third game back from injury with nine points.

Harris’ time in Stillwater has been quite tragic with knee injury after knee injury. Harris played just six minutes in OSU’s past two seasons, missing all of last season.

So, for those keeping track, OSU finished 12-for-23 from 3 as a team. Ten of those makes came from guys who didn’t play with the Cowboys last season.

With the core of Avery Anderson, Moussa Cisse and Bryce Thompson, floor spacing is of utmost importance. If the Cowboys can space the floor similarly to how they did Sunday, they’ll be just fine.

3. A Good Win In a Tough Building

It’s hard to say what Oakland will amount to this season, but OSU was just the seventh Power Five school to play in the Grizzlies’ Athletics Center O’rena. Entering the game, Oakland was 4-2 against Power Five foes at home, most recently beating Georgia in 2016.

Greg Kampe has been the Grizzlies’ coach since their jump to the Division-I level in 1999. Oakland has had eight 20-win seasons since 2008-09. The Grizzlies went 20-12 last year, and — oh yeah — beat OSU in Gallagher-Iba Arena.

Avery Anderson, somewhat quietly, finished Sunday’s game with a game-high 18 points while having seven assists, which tied a career-high.

He was 7-for-10 from the floor, 1-for-1 from 3 and 3-for-3 from the foul line — all outstanding percentages. To go with his assists, Anderson also had two rebounds, a block and a steal.

Cisse towered over the Grizzlies, finishing with 11 points on nine shots while pulling down a team-high 10 boards. He also had a trio of blocks.

Working alongside Kalib Boone in the post, OSU’s starting front court combined to have 20 points, 18 rebounds and four blocks.