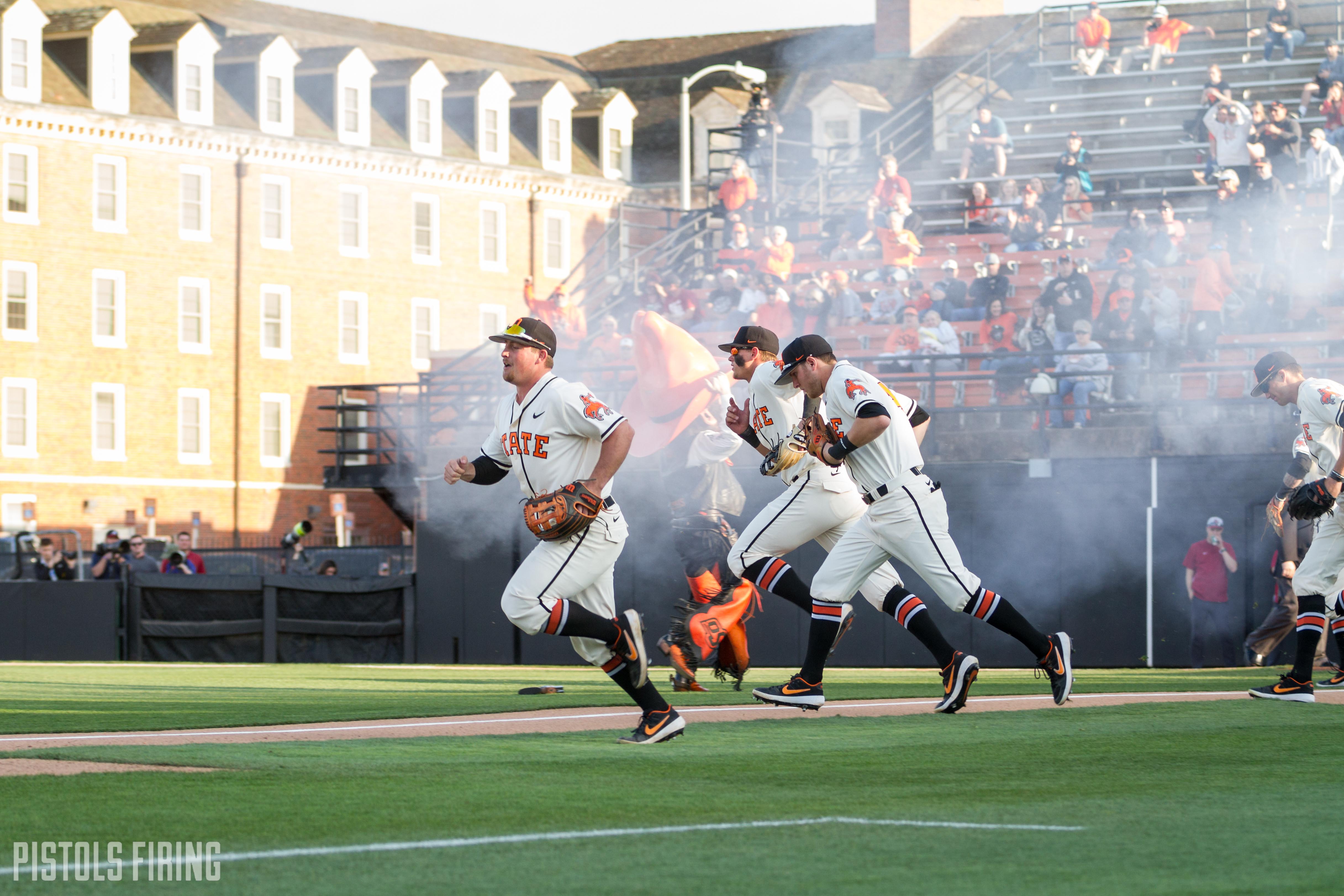 The Oklahoma State baseball team defeated Oklahoma 6-5 in Allie P. Reynolds Stadium’s final Bedlam game after Hewitt, who entered the game in the eighth inning, hit a walk-off single. Hewitt’s teammates mobbed him around first base. The celebration came to a jarring conclusion, as the umpires called everyone off the field to review if Noah Sifrit’s foot touched home plate. Once it was confirmed that it did, the OSU dugout swarmed Hewitt again.

It's a walkoff! @maxhewitt15 is the hero as he brings home the winning run with 2 outs in b9! #okstate #GoPokes pic.twitter.com/dCR97YXHMj

“As a baseball player, those are the moments you live for,” Hewitt said. “This is one of the better rivalries in college baseball, and to be able to end the game like that was a pretty special moment. I’m never gonna forget that. That’s for sure.”

Sifrit’s arc was as interesting as Hewitt’s. Sifrit entered as a pinch runner after Jake Taylor hit a single in the ninth. Sifrit, a pitcher, had to jog to first base from the bullpen. He went on to steal the first base of his collegiate career. He advanced to third on a fielder’s choice before scoring the game winning run.

For the first few hours of Tuesday’s game, it didn’t look as if the Cowboys were going to need a walk-off. The Cowboys scored five runs in the second inning and led 5-2 until the eighth. In the eighth, OU scored three runs thanks to three OSU errors, tying the game at 5.

OSU closer Ben Leeper started the ninth on the mound. Leeper hasn’t allowed a run this season, and that didn’t change Tuesday night as he sat the Sooners down in order leading to Hewitt’s walk-off.

“There’s some things, you look back that you’d like to have back or done differently that happened in the eighth inning, but you don’t get to do that in baseball,” OSU coach Josh Holliday said. “You have to respond to it, and our kids did. I feel real good about the way the kids battled.”

It looked for a moment that the two OU victories were going to bookend the stadium’s history, but Allie P. had a flair for the dramatic. The victory was the Cowboys eighth straight win against OU.

The Cowboys haven’t lost to OU in Stillwater since April 15, 2014. It seemed as if the baseball gods didn’t want OSU to lose that one either, as that game went 18 innings. Before that, it had been since 1999 that the Sooners had won in Stillwater, with most of the Beldam series being played in Oklahoma City and Tulsa.

Reynolds Stadium has seen 34 Bedlam games — 19 OSU victories, 15 OU victories. Since Holliday took over in 2013, OSU is 21-6 against the Sooners regardless of location.

Holliday didn’t get too sentimental with Tuesday being the last Bedlam game in Allie P., but he didn’t undermine the rivalry’s importance.

“They all matter,” Holliday said. said. “I loved the way the kids responded. I never downplay what Bedlam feels like. I think people that try to say it’s another game, they’re just telling themselves that because they don’t want to deal with the failure if they lose. Just being honest, it’s not just another game.”

Before the Sooners’ three-run eighth inning, Holliday made some changes to his defense.

Andrew Navigato moved from shortstop to third base, Christian Funk moved from third to first, Hewitt went from the dugout to shortstop, and Alix Garcia went from first to the dugout.

The switches were made to strengthen the Cowboys’ defense to protect their 5-2 lead, but it all unraveled rather quickly. The eighth inning saw three errors. Funk dropped a ball at first on a sure out, then Navigato mishandled a tough hop at third.

It looked as if the changes might have doomed the Cowboys. Hewitt got to the plate in place of Garcia in the nine hole. Garcia had smacked a three-run home run in the second inning, but Hewitt saved the Cowboys with his walk-off single.

Holliday said if he could do it over again, he would have probably left the team as it was because they were playing well.

3. Varela and His Allie P. Accolades

Varela went six innings against the Sooners, allowing one hit and two runs. He threw 100 pitches and had a career-high seven strikeouts.

He hit a bit of a rough patch in the fourth inning, where he allowed a two-run home run, but it was important OSU pitching coach Rob Walton got as many innings out of Varela as he could with a tough TCU series coming this weekend. So, Varela toughed it out and made it through six.

“It was important to get deep into the game,” Holliday said. “You can’t afford to tax your bullpen at great length midweek when you’ve got a challenging series ahead. … C.J., we needed somebody to give us a good start, and he did.”

Jake Taylor has only had 17 at-bats this season, but he has made them count.

He was OSU’s designated hitter against OU and hit he did. He finished the game 3-for-4 with an RBI and a run scored. His RBI was the first of the game and came off a double to left center.

Although he has fewer at-bats than most, Taylor now leads OSU with a .353 batting average. Three of his six hits have been for extra bases, as he has two home runs and the double.

5. McCusker’s Hit Streak Up to Eight

Carson McCusker has started all 23 of OSU’s games this season. He has had at least one hit in 17 of those games, and he has a hit in all of OSU’s past eight.

McCusker, a massive 6-foot-8 outfielder, was 2-for-3 with an RBI, a run scored and a drawn walk Tuesday.