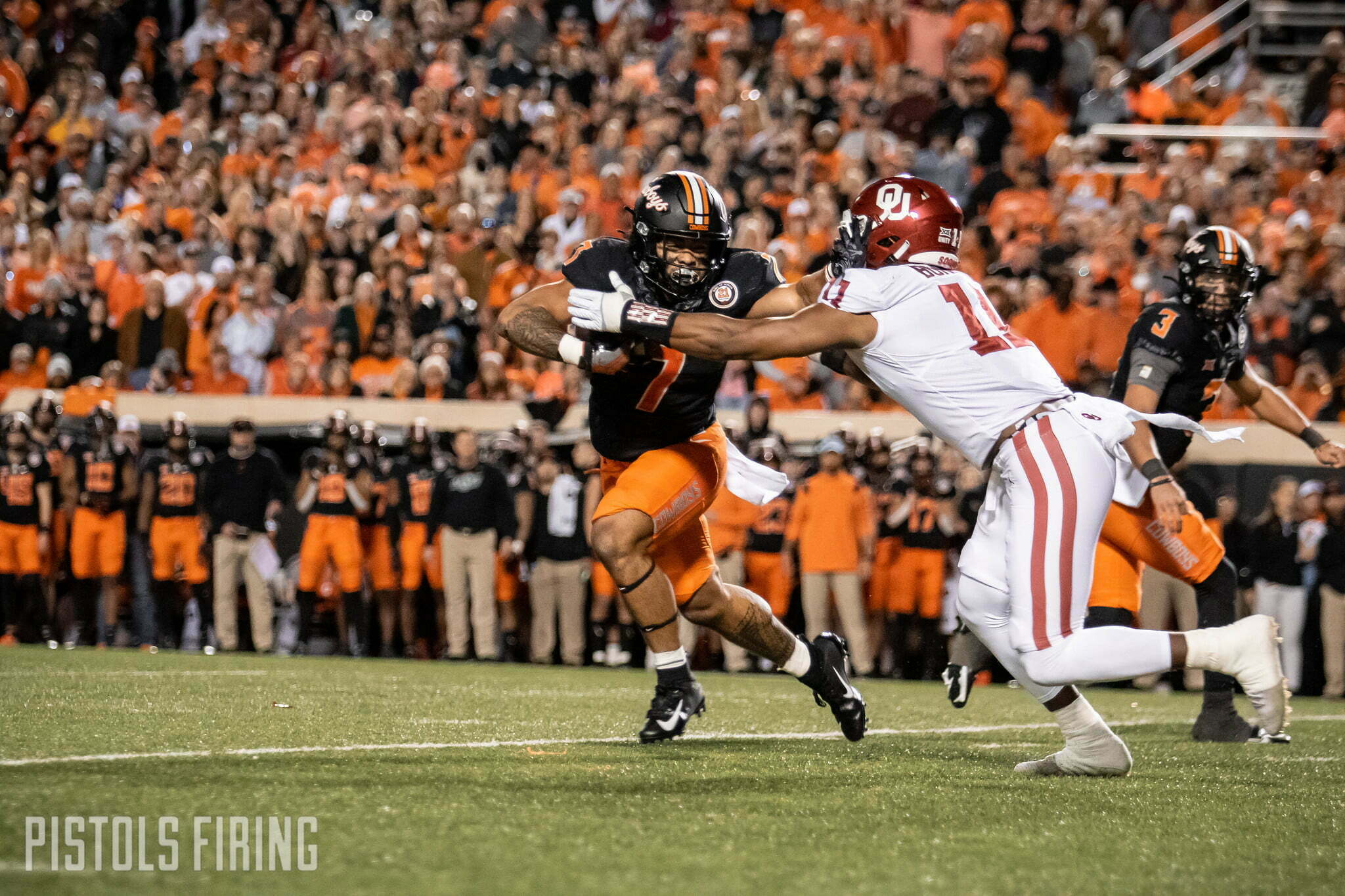 Monday’s news break of Bedlam football likely being done should come as no surprise. Higher ups have been angling this way since Oklahoma made its intentions of joining the SEC known last summer.

But that still doesn’t make the end of a series that has gone on since 1904 any less jarring. Here are five thoughts I had on the end of Bedlam.

During every year of my childhood, the Bedlam football game was the most important sporting event of the year for me, and I think it’s sad that kids growing up in Oklahoma won’t get a chance to know what that is like for the foreseeable future.

I get why it’s going away, and I get why some people are glad to see it gone (glad to see what OSU can do out of OU’s shadow). But the anticipation that lasts from Monday morning to kickoff on Saturday during Bedlam week is a special time, regardless of results. I’m going to miss it.

2. I Believe This Is Football-Specific

In talking with Oklahoma State soccer coach Colin Carmichael a few weeks back, it sounds like each program is going to be able to make its own decisions on whether Bedlam continues.

“From our administration, it’s is gonna be kind of sport-by-sport,” Carmichael said. “My view always on it is I’ll always do what’s best for our program, whether that affects OU, Texas, A&M, Nebraska left. If we choose to play them, if it’s good for our program, we’ll play them. If not, I won’t lose any sleep over it. From my perspective, it’s about Oklahoma State soccer, and I’m sure from Coach (Mark) Carr’s perspective, he will do what’s right for OU. So, if that means playing each other, great.”

OSU athletic director Chad Weiberg seemed to hint last year as well that Bedlam football may fall by the wayside but there remains a goal to play OU in other sports.

Nonconference football games are a bigger deal because there are only three of them, so I wouldn’t totally close the door on all sports — yet. Maybe what’s right for wrestling won’t be right for basketball. Maybe Bedlam baseball continues and tennis doesn’t. It’s hard to say right now, but — based on what Carmichael said — this appears to be a case-by-case thing.

3. When Could It Come Back?

Assuming neither team wants to schedule two Power Five nonconference games in the same season, the teams could hypothetically play in 2031 or any time after 2038. Until then, at least one team has a Power Five game scheduled already. Oklahoma State, in particular, is booked.

Now, there isn’t a rule against playing multiple Power Five nonconference opponents in a single season, but why would you? The spirit of competition? It doesn’t make sense for either school to potentially tank the expectations of their season with an extra game either could lose.

And if the two were to schedule a game for 2031, where would it be played? I would imagine both schools would fight for a home-and-home. So does the first leg of that get played in 2031 and the second all the way in 2038? Logistically, it’s a nightmare for a little bit.

Maybe there is a world where Colorado rejoins the Big 12 and Clemson joins the SEC, so dates in 2036 and 2037 open up, but that might be the earliest Bedlam could resume if all parties wanted it to.

The University of Oklahoma acting like this is an OSU issue is laughable.

“Oklahoma State has shown no interest to schedule any future games in football, so we’re moving on (with filling OU’s future nonconference openings).”

We’ve already gone over how OSU is booked, like OSU AD Chad Weiberg told McMurphy, but even if the Cowboys didn’t have a game scheduled for the next 100 years, OU put the rivalry in jeopardy when it left OSU.

It’s like a girlfriend leaving you but asking you still buy her occasional dinners and send flowers on Valentine’s — that’s not how this works.

OU was in the catbird seat when OSU acted first when talking about the potential of Bedlam ending. That gave way for the Sooner brass to spin it as, “Well, they don’t wanna play.” It’s comical, and the fact that people are blind enough buy into what OU is selling is comical.

5. The Game That Encapsulates Bedlam

If this is somehow the end forever, I’ll remember Bedlam through the lends of Taylor Cornelius.

Cornelius was the ultimate underdog, like OSU. A former walk-on who was getting his season in the sun, Cornelius went down to Norman and was a single pass away from beating a Heisman-winning quarterback in Kyler Murray and his myriad NFL weapons. The Cowboys entered that game having lost three of four and were 17.5-point underdogs before Cornelius threw for 501 yards.

OSU got the ball down 48-41 with 3:29 to play, and Cornelius led the Pokes 71 yards down the field and scored. OSU went for 2 and the lead. Cornelius rolled to his right, had Tylan Wallace open but missed him.

That’s what it is like following OSU in this rivalry. You’re the underdog, but the hope is enough to move mountains and nearly slay giants. You feel a way only sports can make you feel. And when a game like the 2021 Bedlam comes around, the feelings you felt in 2018 amplify the feelings of glory. That’s the part about Bedlam I will miss the most.