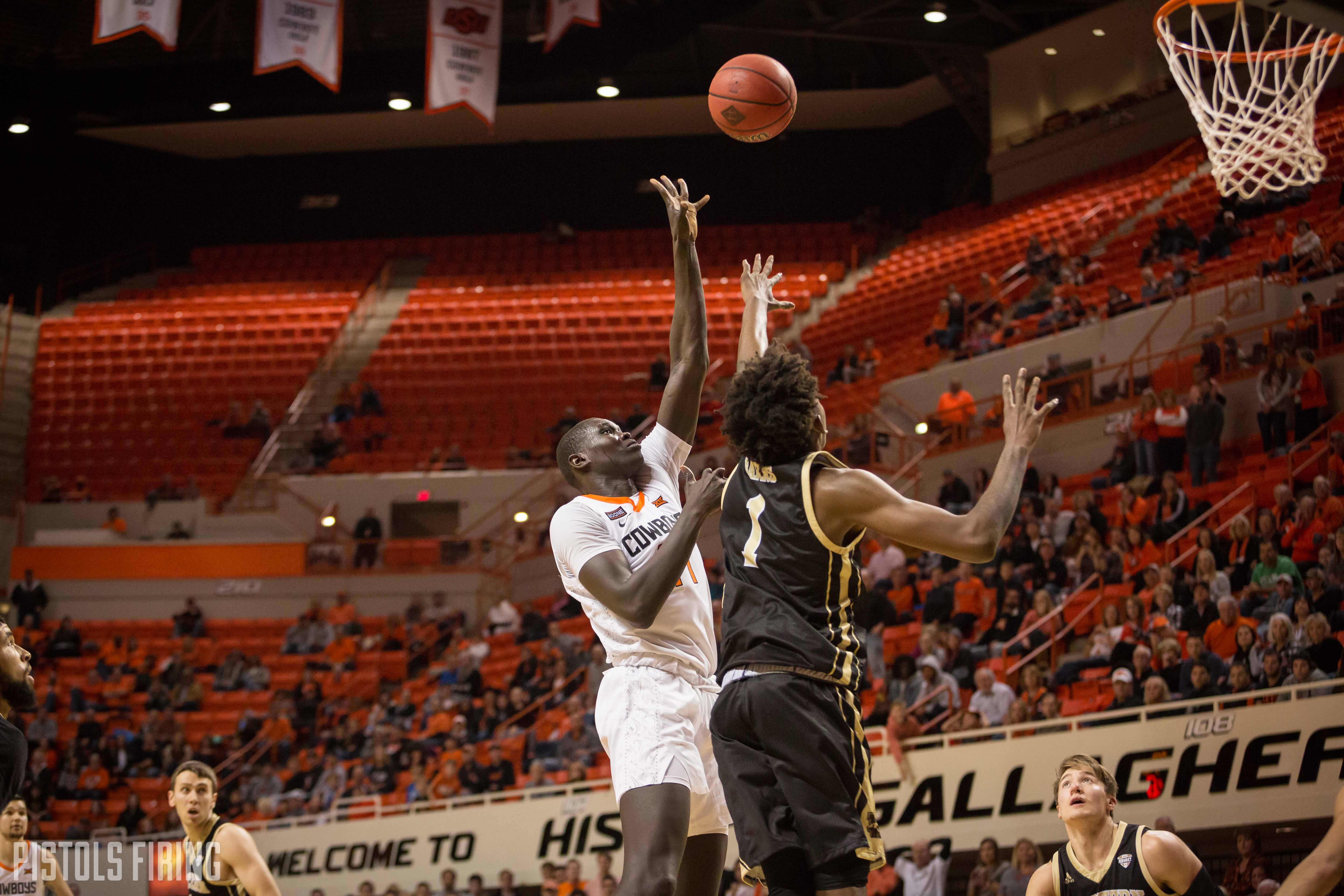 STILLWATER — Through the Cowboys first five games, their margin of victory hasn’t been quite as high as some might have expected.

Oklahoma State beat Western Michigan 70-63 on Friday night in Gallagher-Iba Arena, bumping the unbeaten Pokes’ average margin of victory to 9.2 points. At GIA that number is only 6.75.

“Give me all of these two, three, four possession games this time of year,” OSU coach Mike Boynton said. “Because I know for a fact when the calendar turns that’s what we’re dealing with. I don’t know how much you guys study the numbers, but the Big 12 is the most competitive basketball league in the country. It’s been that way for about six years. How they measure that is games decided by five points or less or in overtime. That’s our league every year. These games will help us have some experience going into that, and that’s why we build the schedule the way we do.”

Yor Anei was the Cowboys’ takeover artist Friday. The sophomore center had 13 points, 12 rebounds and five blocks. In the second half Anei was 4-for-5 from the field and had eight rebounds.

“I get it, I understand our fans would like to see win by 30, a runaway and maybe everybody plays a little bit more,” Boynton said. “I don’t know if that’s necessarily good for this group. I think this group needs these games.

Here are four thoughts from the contest.

From everywhere but the foul line, Yor Anei was dominant Friday night.

Anei stuffed the stat sheet with 13 points, 12 rebounds, one assist, five blocks and a steal. The 12 boards tied a career high for the long sophomore.

It was important Anei stayed out of foul trouble against Western Michigan for a few reasons. Entering Friday, the Mustangs led the country in free-throw attempts per game. Anei was also without backup bigs Kalib Boone and Hidde Roessink. Boone was out with an illness, and Roessink is still recovering from a knee injury.

“It was huge,” Boynton said. “We didn’t know about Kalib until this morning. Those things happen. That’s why you want to have depth as much as possible. Basketball season is played through the winter, and something’s going around town. My kids had it. (Boone) woke up with a 103-degree temperature, and we just told him, ‘Hey, stay in bed, and we’ll figure it out.'”

One of these days, ambitious guards will learn to dump a ball off instead of trying a layup on Anei, but until then, enjoy clips like this:

OSU missed a lot of free ones, and it was really just two guys who did the missing.

Anei and Isaac Likekele were a combined 3-for-11 from the foul stripe while the rest of the team was 12-for-13.

“The free-throw line, it’s just a concentration thing,” Boynton said. “Ice beats himself up over it pretty good. I got confidence that he’ll bounce back and be ready to play in the next game. But it’s something we certainly need to address. We can’t shoot that poorly, especially in close games and feel confident that we’re gonna win.”

Despite the free misses, Anei and Likekele, OSU’s sophomore class, both finished in double figures, with Likekele adding 10 points to Anei’s 13. Both shot higher percentages from the field than they did from the foul line.

Like Anei, Likekele filled up the box score elsewhere, as he had three rebounds, four assists and four steals.

I sat on the south baseline of Eddie Sutton Court and thus didn’t need ESPN+ to watch the game, but boy did I hear about the struggles.

Those who weren’t in the arena didn’t get to watch the entire first half of the game because of whatever technical issues the service was having.

The idea of ESPN+ is awesome: $5 a month for all this coverage of whatever your team is. But the execution has had quite a few growing pains in its first year, and missing an entire half of an unbeaten Power Five school’s men’s basketball game is unacceptable.

We’ll end here, though this is probably the most important.

Mike Boynton was unable to talk about the NCAA’s investigation into his program, but now that he is finally able to — now that the singular Notice of Allegation has been dealt — there was almost a sense of relief about him that this dark cloud that has hung over his entire career as a head coach is nearing its end.

“September 26th of 2017, I had yet to coach a practice, and this has been hanging over our program since then,” Boynton said. “There were a lot of options of the outcome between then and now. I think on a range of 1 being the worst, we have to disband our program, there’s a bunch of bad people doing a bunch of bad things all the time, and 100, being Oklahoma State wasn’t involved at all, we know that’s not the case, I think we’re probably, considering what I read when I got the notice yesterday, we’re probably in the 95, 96 range in terms of what I feel.

“I’m not taking it lightly, but considering where I was at that time to where I am now, I feel good that I don’t think I read anything in the notice that I didn’t know that day or an immediate time afterward. It’s an opportunity for us to get closer to the end. I’m looking forward to the day where I can finally coach a game and practice and recruit without this stuff hanging over our heads. Obviously we’re closer to being able to do that.”

After the FBI’s investigation involved Lamont Evans, an assistant at OSU at the time, OSU was almost always going to get hit with something from the NCAA. But with it being the sole accusation about an assistant that was fired shortly after his involvement was made known, Boynton said this was “probably the best bad news” OSU could get given the circumstances.

Boynton said he hasn’t been able to talk about the investigation in depth with recruits either, and that when this was happening without the NCAA’s notice available, others would use it against him.

“It’s important that people know they can trust us,” Boynton said. “And how they trust you is to be transparent and open and honest about what’s going on. It’s been the same for (recruits). I haven’t been able to discuss even the facts, so there’s been a lot of speculation, essentially that we’ve been dealing with coming from other schools.

“‘Well, if this happened here, imagine what’s gonna happen here.’ Well, what’s happened here is now public knowledge, and I think it’s safe to say we will move forward in the process feeling like we’re in a pretty good position.”