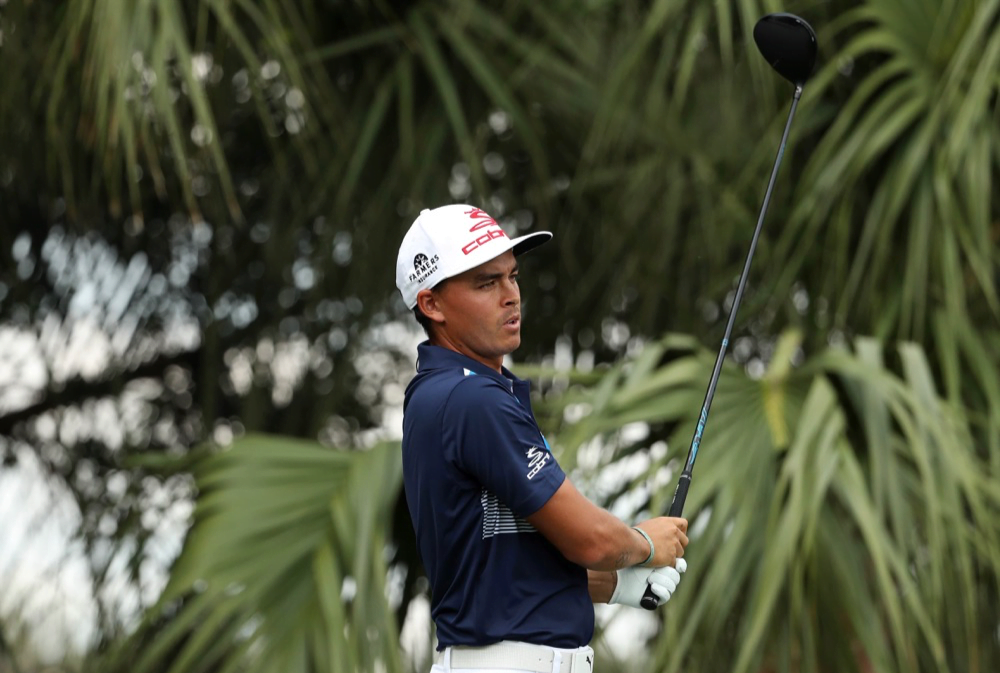 Rickie Fowler is putting on a show at the Honda Classic this week. He leads by four over Tyrrell Hatton going into the final round at PGA National in Florida. He followed up a pair of 66s in the first two rounds with a flawless bogey-free 65 on Saturday to take hold of the tournament.

The zenith of his round came on the 18th hole when he pummeled his drive 339 yards and knocked out an easy two-putt birdie to get to 13 under for the event. Fowler is No. 4 in the field this week in strokes gained off the tee. He’s been sending test missiles near the Atlantic all week.

Think Rickie Fowler is a little pumped up?

That Rickie drive on 18 … my gosh. pic.twitter.com/WvwUJG0mw2

Rickie Fowler two-putts for birdie and a 5-under 65. #QuickHits pic.twitter.com/8o91YbOMDA

After the round, Fowler actually credited Oklahoma State with helping prepare him for windy courses like PGA National. The wind was weak on Saturday and Fowler took advantage. But it’s supposed to blow on Sunday, and it could be nasty.

“I love playing in the wind,” he told NBC. “I grew up in Southern California and it blew 10-15 [MPH] in the afternoon. I went to Oklahoma State and played golf there. It can blow in Oklahoma. You can use it to your advantage.”

There are no sure things on the PGA Tour, but a four-stroke lead after 54 holes is pretty close.

Still, Fowler knows he has a long way to go on Sunday.

“Mistakes are going to happen and potentially bogeys are happen when you miss it in the wrong spot,” said Fowler. “I’m going to stick to the same game plan. The wind is going to be different tomorrow. It’s going to be from a different direction, so the golf course and tee shots will play a little bit differently. I think it’s back to roughly where the wind was yesterday.

“Just stick to try to keep it simple, hit as many fairways and greens as we can, and hopefully roll in a couple putts from there.”

Fowler is trying for his first win on the PGA Tour since 2015 and the fourth overall in his career. He has said this week that he wants to start winning more when he’s in this very position — he’s 0-4 with 54-hole leads.

“Well, it would join a small collection,” he joked of grabbing a Sunday trophy. “It would be nice to add to that and continue going from there. A chance to win this tournament would be special. I’ve had some good finishes but ultimately, yeah, I would like to be getting the trophy tomorrow on the 18th green.

But there is a lot of golf to be played. Being a resident down here for almost seven years now, this is where I spend the most of my time. I love it down here. Love Jupiter. Got a lot of the guys that live down here. We get to play and practice together when we’re home, and we travel together. So it’s special.”