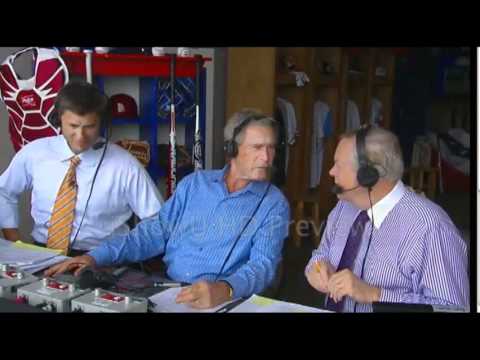 I think President Bush has a soft spot in his heart for Stillwater, Oklahoma. First, the terrific commencement speech he gave to the class of 2006 at Boone Pickens Stadium before choppering away in Marine One over the practice field. A speech Boone may or may not have written a 7-figure check for (I wouldn’t bet my life either way). Now, after christening TD Ameritrade Park and the first game of the 2011 College World Series, he headed up to the booth to talk some college baseball with Mike Patrick and Robin Ventura.

The first clip is hilarious for its randomness. It’s like they’re all three just sitting there thinking “crap, what should I say next, I don’t know what to say!” and Bush just defaults to Robin in the v-neck at Allie P.

The best quote of this entire footage, and maybe one of the best we’ve ever had on the blog, is Ventura on his first major league game, “I couldn’t feel anything.”

This isn’t OSU-related but Bush getting in Mike Patrick’s announcing lane is unbelievable. He just takes over the booth for like 3 seconds before morphing back into the former president.

Pretty interesting conversation instigated by Mike Patrick (who’s wildly underrated) here on the effect of college baseball on the pros. President Bush follows him up by saying “[OSU] was one of the great programs that helped send the signal that college baseball was good preparation for the major leagues. A lot of major leaguers came out of Oklahoma State.”

Also, if you stay with it until the 1:12 mark I swear it looks like he tosses in a circle change on the first pitch replay which was undoubtedly a snarky rebuttal to the John Wall debacle the night before: “I pull the string on circle changes in front of 25,000 rabid college baseball fans, you can’t even make it to the plate in front of 14 Nationals fans and 3 members of Senate. Thanks for playing, Washington.”

All in all a solid performance from one of the finest Texans in our country’s history. It’s hard to imagine many other politicians, much less presidents, dropping mid-1980s references about storied college baseball programs on national television.

I also hope that’s not the last time in the next 365 days a former Oklahoma State star is shaking hands with a president…if you know what I’m saying.

Note: sorry for the “iShowU HD” watermark – I’m testing out this software momentarily (it works pretty good, don’t you think?) and there’s no way to get rid of it before I purchase it…