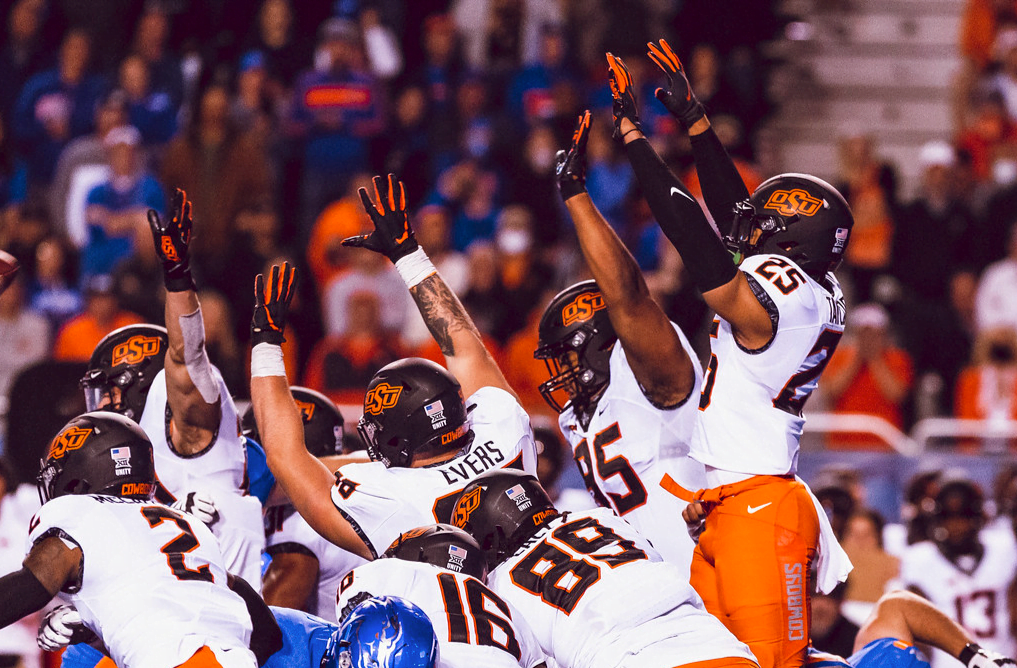 Sure, OSU’s running game looked stout, Jaylen Warren looked like Barry Sanders and the offensive line showed fight. And sure, OSU’s defense looked incredible, especially to close the game. Howevah, the passing game was virtually non-existent — and the same can be said for creativity on offense.

Here are my grades for the Cowboys’ performance in Week 3.

Who knew this OSU team had that in them? Not I, Sam I Am. After the Cowboys rushed for 48 yards against Missouri State and then 146 yards (on 43 attempts) against Tulsa to open the season, the running game against Boise State was arguably the reason OSU won the game. They ran it 58 times (!!) for 249 yards (!!) and three scores (!!!!). That’s a season-best 4.3 yards per carry, and while it was definitely helped by an early 75-yard scamper and score by Jaylen Warren, it’s clear the coaching staff figured some things out schematically to improve the running game. And it couldn’t have come at a better time.

Tay Martin, OSU’s best receiver, missed the game with injury. Same for leading receiver Jaden Bray, and Langston Anderson. Then Bryson Green had an in-game injury. So, essentially, the team was missing an entire unit of receivers on Saturday. I don’t think we appropriately factored in just how shorthanded the passing game was.

To score 21 points might be the modern-day miracle akin to Jesus turning water to wine. The offense certainly wasn’t pretty, in fact it was rather ugly, but winning as an underdog on the road with that many injuries? Yeah, let’s give this OSU coaching staff their flowers. They earned that one.

The whipping wind in Boise made conditions challenging for every phase of the football game but especially special teams, where punting into the wind looked a bit like trying to swim upstream at Niagara Falls. So Tom Hutton’s three punts for 38.3 yards, on average, actually looks pretty darn good taking that into account, even if those numbers don’t wow you. So I’m not docking OSU here for that. The B+ is mostly a reflection of the return game (or lack thereof). OSU had one kick return for 16 yards and no punt returns. In the first two games of the season that appeared to be a strength but was non-existent Saturday.

OSU gets a boost here though for its punting placement. OSU’s gunners did well to pin Boise deep in its own territory and make them drive 90 or 95 yards. OSU won the field position game. Might’ve been the difference in the game.

Oh, and to top it off? Jason Taylor II’s blocked field goal effectively iced the game. Special teams, for the win.

OSU maintained all preseason that it would use a running back by committee approach, but it sure seems like Jaylen Warren has emerged as OSU’s go-to guy. The Utah State transfer toted it 32 times for 218 yards and two scores in the win, including a game-busting 75-yard scoot and score early that gave OSU’s lifeless offense some momentum. His shiftiness and physicality brings an element to the running game this team desperately needed and he was the MVP of the game. OSU doesn’t win Saturday without his heroics.