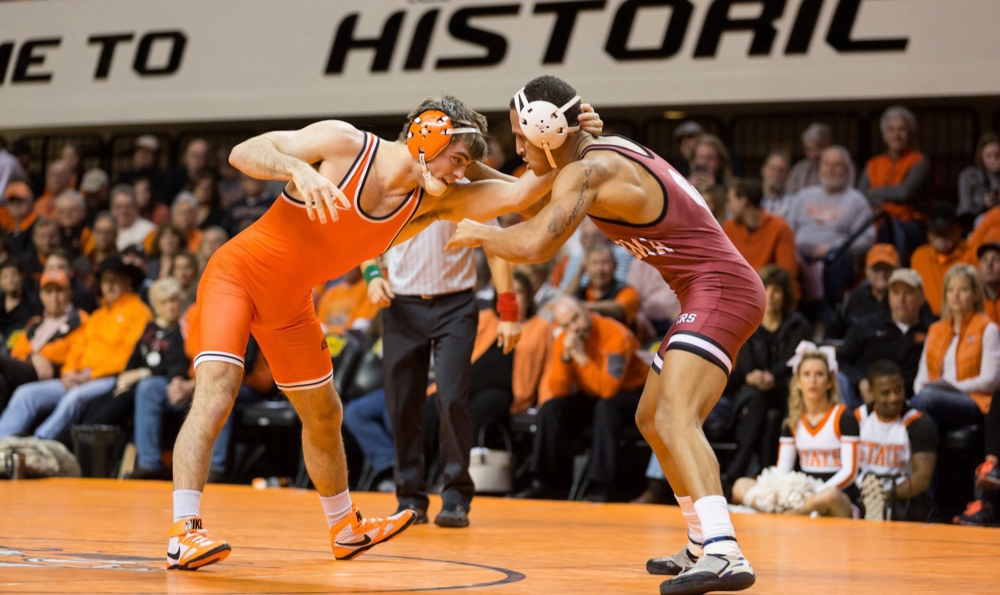 Wrestling tournaments are equal parts intensity, exhaustion management, and absolute chaos. It is difficult to tell exactly what is going on at a given moment in the first day and a half of the NCAA wrestling tournament. With 6 mats on the floor and multiple wrestlers in action, you are going to miss a couple with focus elsewhere. You will also find yourself wondering “who in the heck is winning this thing?”

Well, I cannot really help with the confusion. That is just part of what makes the event so great! I can, however, help on trying to figure out what teams are in the lead and how your team is doing.

Pretty straightforward. You place first, you get 16 points. You place 9th, you get nothing.

This is also pretty straightforward. A wrestler is awarded one point for each match that he wins in the championship bracket, and half a point for wins in the consolation bracket.

For example, Nolan Boyd wins three matches in the championship bracket before losing to Gabe Dean in the quarterfinals. Nolan is then bumped down to the consolation semi-finals where he wins two matches to capture third place. Nolan would be awarded 4 advancement points (3+0.5+0.5) and 10 placement points for a total of 14 team points.

Bonus points are where championships are won. Penn State has won most of their 5 titles in the last 6 years on bonus points. Defeating your opponents handily, especially in the early rounds, is crucial to your team’s success.

Fall: When a wrestler is able to get both of his opponent’s shoulder blades on the mat and hold them there for one second. This immediately ends the match and the winner is declared.

Default/Forfeit/Disqualification: When a match is called for any reason. The opponent is injured and cannot continue, a wrestler missed weigh-in and did not make his weight cut, an illegal or unsportsmanlike penalty is ruled.

Major Decision:  Major decisions are when a wrestler defeats his opponent by 8 or more points.

Naturally we want our wrestlers to wrestle five matches, win them all, and have multiple individual champions every year. In reality, consolation brackets play a major role in deciding which team is going home with hardware.

When a wrestler loses in the championship round, they get an opportunity to rally and wrestle for third-seventh place in the consolations. The more you wrestle, the more opportunity you get to score bonus points, advancement points, and placement points for your teams. For OSU wrestlers that have tough early matchups, such as Chandler Rogers or Nick Piccinnini, they will be made heroes in the consolation rounds.

Fans can follow the action online through live results and play-by-play on www.trackwrestling.com. I will also be providing tweets from the event @leecothran.

Fans can listen to both duals live on 93.7 KSPI-FM or okstate.com with Roger Moore on the call. All sessions will also be available on the WatchESPN app, or ESPN3 with the championships available on ESPN on Saturday evening.

Here is a look at how many points the winner of the last five NCAAs has reached.

Tune in Cowboy fans. This weekend will be great theater.
Related Topics: