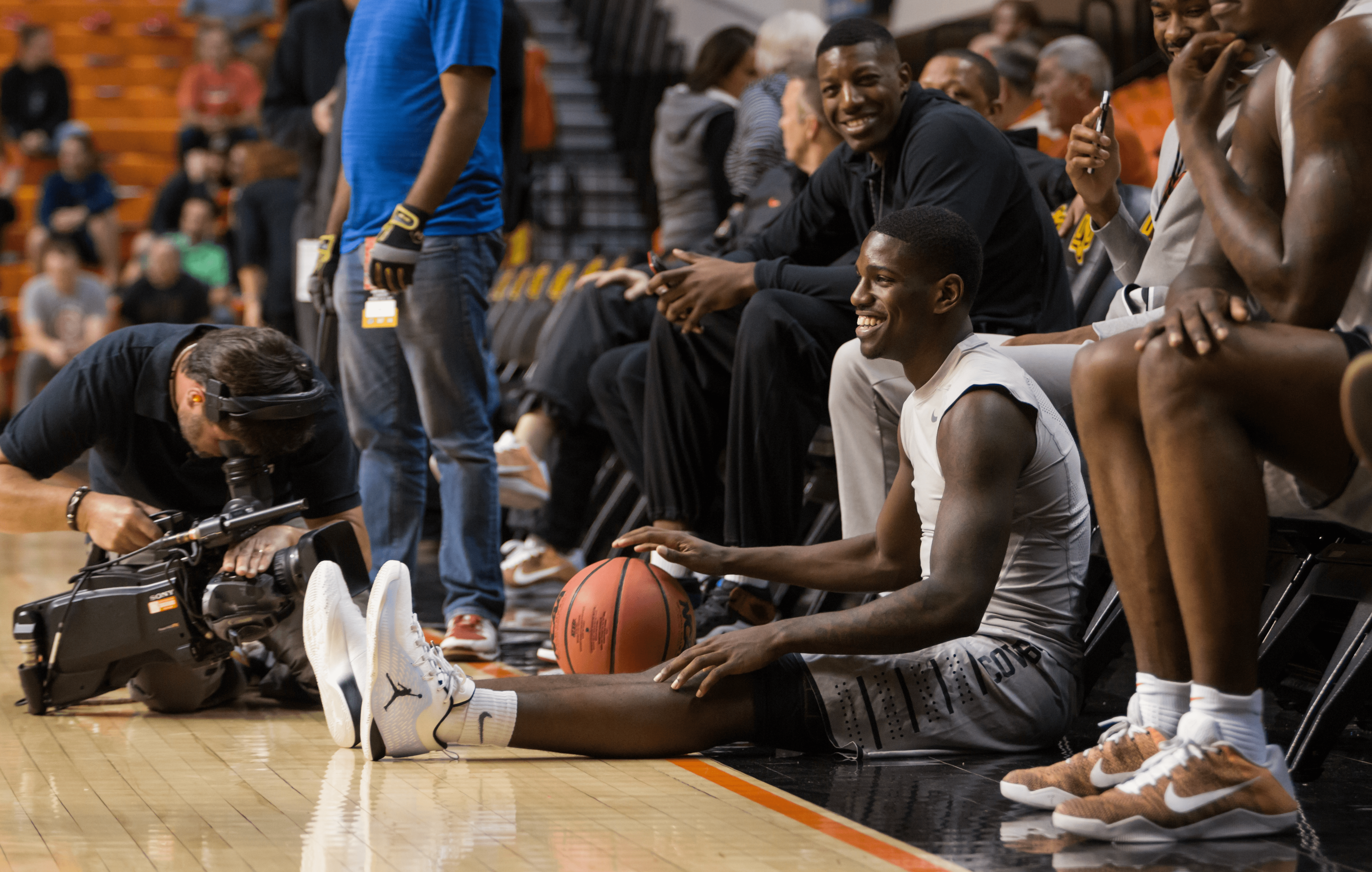 For the second straight week, the Pokes hit the road to be the last thing standing between a team and a no. 1 overall ranking. The no. 2 Kansas Jayhawks (15-1, 4-0 in B12) carry the banner for the league and are a sure bet to be in the thick of things deep in March: Death, taxes and Jayhawks primed with talent.

It’s a long season so remember that one time we won in the Phog?

There should probably be an asterisk next to the K-State win (Walk Chalk), but pretty solid work so far. KU found itself down by nine at the half at Lloyd Noble after some cold shooting (34% in the first half). Head coach Bill Self laid into his boys and they responded.

Behind Frank Mason and his smoking guns (7 of 12 from the field after halftime), the Jayhawks stormed to a 15 point lead and never looked back closing out the Sooners in Norman.

Currently sixth in the KenPom Player of the year standings, the 5’11” point guard has developed a killer instinct. Against OU and Texas Tech, the senior has just taken over the game and played undeniably dominant basketball (think Jawun against OU in Stillwater last year).

Mason likes to play downhill possessing great vision and the ability to hit some shots in traffic, but most notably the dude is stroking from three this year: 54.9% (39 of 71). For comparison, Phil is 42 of 106 on the year. They say it takes elite point guard talent to make a run in March and it looks like Mason has really developed into that guy in his fourth year.

Frank Mason had a night! #kubball

The consensus No. 1 recruit in college basketball is just about everything you’d want him to be. The 6’8″, 207-pound freshman is being referred to by NBA scouts as a point forward: top shelf point guard-level vision and passing to go with elite athleticism (impossible to overthrow on an alley-oop).

With KU’s center getting hurt, Self has shifted Jackson down playing him as a small ball power forward and while he’s thin he’s still cleaning the glass (top 15 in Big 12 in rebounds).

Holes in his game are few but well-documented are his shooting struggles (51.3% from the field, 25.7% from the three and 74.7% from the stripe). Playing down low, he gets tangled in the fray and collects fouls quick at times.

Similar size as Andrew Wiggins, he plays more confident and aggressive but still unselfish with the ball and with the bounce of Andre Williams. An elite talent, make sure to catch Jackson when he comes to Stillwater in March-they don’t do 4 for $20 deals at Chesapeake Arena.

Gotta get these Josh Jackson vines in while I still can https://t.co/4qoYFqi0Jb

The defense isn’t near as developed as the offense though. Again, losing their premier shot blocker opens up the lane (K-State shot 60% inside in a near upset on Jan. 3rd) and the interior defense isn’t as strong as Carlton Bragg hasn’t lived up to high expectations. 6’10” fifth year senior Landen Lucas battles on the boards but isn’t a rim protector (0.9 per game).

KU doesn’t do a solid job of getting to the free throw line either (221st in the nation in free throws made).

Maybe the Pokes will have a shot with an NBA point guard that’s given KU fits with his penetration (and no Joel Embiid-looking guys back there to erase) and a host of sweet shooting wings in Carroll and Forte that have been playing inspired ball lately. Self isn’t sold on this top five squad yet, recently quoted after the OU win.

“We don’t deserve that, I’ve coached for a while and I’ve felt like there are some teams that have put in time and effort, and I don’t feel like this team quite has.”