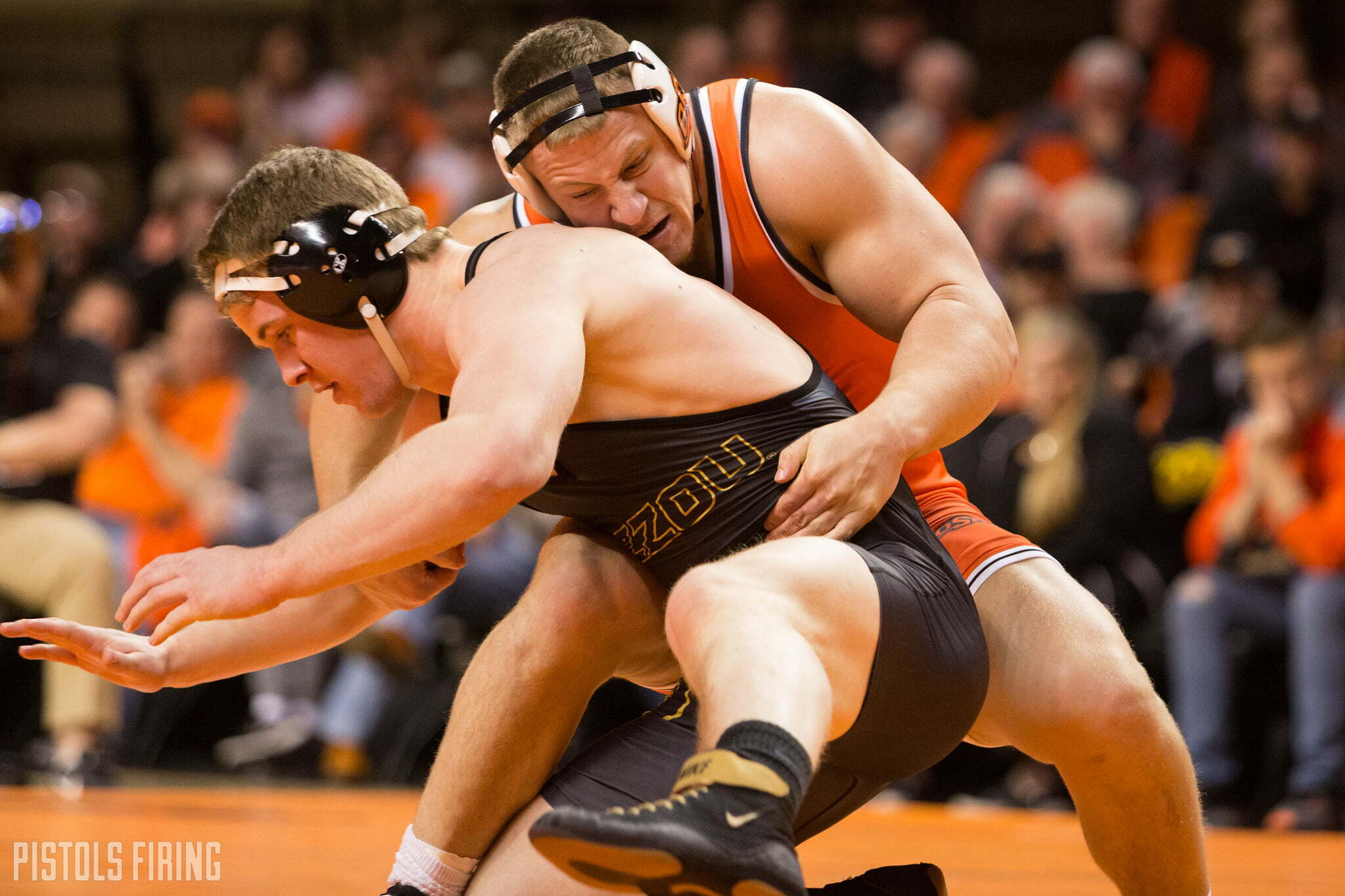 Last week we took a look at how things were setting up for the Cowboys from in the NCAA tournament from 125-157. Today we’re going to take a look at 165-HWT.

Rogers finished 5th at the NCAA tournament last year and is a guy most fans hoped would maintain that momentum off last season and stay up in the top 3-4 of this weight class. Maybe threaten the top two guys, who have both won NCAA titles. So far he hasn’t done that. He dropped a match early this season to a really good wrestler in Va. Tech’s David McFadden and slipped up in duals at Iowa and Wyoming, dropping matches many had projected him to win. He has the potential to win out up to the NCAA tournament and avenge the Wyoming loss in the Big 12’s.

Smith was hurt in the dual against Missouri and hasn’t wrestled since. OSU hasn’t come out to say much on it, but we’re not aware of it being anything season-ending.

This and 125 are the two toughest weights in the country. Jacobe had been wrestling well up to the injury. If healthy he can do himself some favors in seeding by winning in the OU dual this weekend and taking the Big 12 tournament. If he does, that will put him at about an 8-seed probably and a projected All American.

They’ve shared the starting job a bit here. Most fans on social media seem to really want Marsden as the starter, but he either isn’t beating Moore in the room or the coaches just aren’t seeing enough to push them to make the change. I don’t know who they’ll be sending out the next few weeks and into the NCAA tournament, but these last few dual matches are winnable. Whoever goes out really needs to win them for their seed at the Big 12 tournament, then they’ll still need a good Big 12 tournament to qualify.

Weigel has one loss this year in the Missouri dual to 4th-ranked Willie Miklus. Weigel was winning the majority of the match but slipped up and was put on his back late in the third. It came out after the match that Weigel was hurt here and you could see something was a bit off. This really stung his ranking and likely his NCAA seed. I personally think he has made some significant improvements and is a lot better than his ranking. He has five top-20 wins, but again that one loss really hurts him when it comes to getting a good seed.

He can certainly win out, and if a few things go right for him he could get a 2-3 seed at the tournament and really be a threat to make the NCAA final. The Big 12’s good, so navigating the last three duals along with that will bolster his resume, but he has wins over a pretty good MAC wrestler and a really good ACC wrestler. If they can both go in and win their conference tournaments, Weigel may be right back in that 2-3 seed range which will make his run in the NCAA tournament much easier.

White has easily been the best surprise of the NCAA season for the Cowboys. Unranked going into the season and now at No. 12. He has two tough losses against highly-ranked guys, but you can see his improvement every time he goes out. Winning out won’t drastically help his NCAA seed, but it obviously won’t hurt. You can probably project him to be around a 10-seed. I really think he can finish higher and hopefully be an All-American, which in in the top eight.

Overall Smith’s teams traditionally peak a the right time and most guys out-wrestle their seeds at the NCAA tournament. The ceiling for this team with all the guys they have redshirting is probably 3rd, but get that finish and they’ll roll into next season with a lot of momentum and real chance at an NCAA title.